Fighting a former world champion like 35-year-old Brook would present a massive step up in class from the old, washed-up opposition Benn has consistently been facing since he turned professional in 2016.

There’s the worry that Benn may be biting off more than he can chew at this stage of his career, given that the best opponent he’s faced thus far is arguably journeyman Adrian Granados.

Benn’s promoter Eddie Hearn hasn’t chimed in on his thoughts on facing the far more experienced Brook, and he may balk at the idea of them fighting.

A highly animated Hearn already warned Benn NOT to go ahead with his wish to face middleweight Chris Eubank Jr, telling him not to mess up the plans for him to win a world title at 147.

With Benn’s huge money-making potential, it’s believed that he’s being pegged as the replacement for Anthony Joshua as Hearn’s #1 fighter that is bringing in the dough for Matchroom Boxing.

Joshua’s career will likely be finished off in his next fight with Oleksandr Usyk, making it even more critical that Hearn keep Benn out of harm’s way.

“We agreed I’d take care of business for him,” said Conor Benn on Instagram on him wanting to avenge Khan’s loss to Kell Brook.

It’s safe to say that it won’t help Khan feel better about himself seeing Benn avenge his humiliating loss at the hands of Brook last Saturday.

Even if Benn can beat Kell, how does that change what happened to Khan? I mean, Khan’s career will be just as over with as it was before Conor avenged his loss.

“I fancy my chances. We should make that fight next,” said Conor Benn to iFL TV on him wanting Kell Brook next. “Is it realistic? Of course, it’s realistic.”

You can already predict what Eddie Hearn will say about the idea of a greenhorn like Benn taking on a powerful puncher like Brook in the summer.

No way Hearn will allow that fight to happen, even though it would serve Conor in good stead to prepare him to challenge welterweight champions Errol Spence Jr, Yordenis Ugas, and Terence Crawford.

”It’s got to be,” said Benn when asked if it’s the end of the road for Khan.

“Highly likely, but nothing is confirmed until it’s been signed on the dotted line,” Conor said when asked if Chris van Heerden is his next opponent for April 16th. “Most definitely for the summer, 100%,” Benn said about wanting to fight Brook.

“End of story,” said a visibly agitated Benn when asked if he fancies the fight with Kell Brook.

“I was going to stop it in the fourth because he was taking too much punishment,” said Khan’s trainer Brian ‘Bomac’ McIntyre to Pro Boxing fans. “He came to fight and did his best. I take my hat off to him.

“When you think about it, when Amir was using his jab and moving side to side, he was winning the rounds,” Bomac continued. “He was winning part of the rounds until Kell came on at the end to try and steal the round from him.

“I’m not surprised. I know he can punch,” said Bomac when asked if he was surprised about the power Kell showed in the fight.

It’s hard to tell what Bomac is talking about because this writer didn’t see Khan coming close to winning any of the rounds last Saturday night against Brook. Yeah, Khan started well in the third and fourth rounds, but Brook finished strong, landing huge shots. 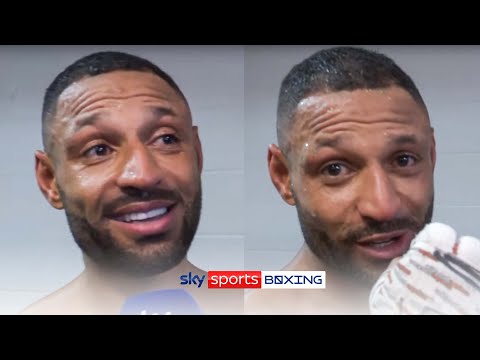