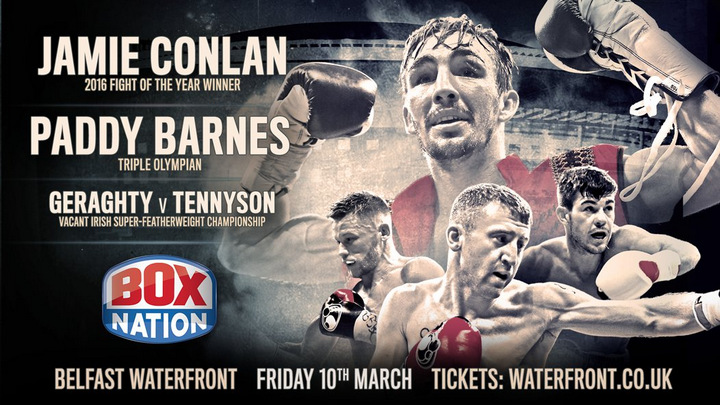 White knuckle Belfast warlord Jamie Conlan has been swapping leather and lumps against some of the world’s hottest talent in the brutal fight school’s of the US West Coast, ahead of his charge towards a 115lb world title shot this year, writes Glynn Evans.

The 30 year old, who is known for professional purposes as ‘The Mexican’ because of his swarthy looks and lethal liver shots, is already ranked second to Japan’s WBO champ Naoya Inoue and ninth to IBF boss Jerwin ‘Pretty Boy’ Ancajas of the Phillipines.

And this Friday, live on BoxNation, Conlan the creaser looks to storm the WBC listings by dispatching Nicaragua’s former world title challenger Yader Cardoza for the International Silver strap at The Waterfront Hall in his home city.

‘I spent a couple of weeks in Los Angeles, at the Wild Card Gym in Hollywood, then at Manny Robles’ Rock Gym where (WBO featherweight champion) Oscar Valdez, (World amateur silver medallist) Jason Quigley and my brother Michael (a Commonwealth, European and World amateur champion) train,’ says the habitually pleasant Conlan who is unbeaten in 18 with 11 victims falling early.

‘There’s always a real buzz at ‘The Rock’, always a crowd to watch the sparring and, being around such quality fighters, you have to up your own standards.

‘I sparred (unbeaten WBO Super-Bantam boss) Jesse Magdaleno, a Columbian called Oscar Negrete (15-0) and Joselito Velasquez, a highly rated Mexican Olympian, and everyone is there to prove themselves. You had to be right on point. But it really helped with the step up from British-European to world level. You need to push yourself to the maximum every session.

‘It was great to spend time with Michael and catch up. Before he relocated, we lived in a house together and he was always a part of my camps if he wasn’t away with the Ireland High Performance set up. I’m four years older but don’t spar him anymore because he’s world champion, too big, too good! Honestly, pro world champions come out of their way to watch him spar.’

Conlan returned to the UK sharp as a blade ahead of his scheduled headline turn at the Waterfront in February but, frustratingly, the gig was temporarily scuppered after he contracted a chest infection.

‘It completely knocked me out for a couple of days but, on the plus side, the postponement certainly made dropping the weight easier,’ acknowledged the reigning Commonwealth and WBO Inter-Continental champion.

Back to full fitness, Belfast’s finest has subsequently been fine tuning in Glasgow – adopted hometown of his Scouse coach Danny Vaughan – ahead of his ‘must-win’ assignment on Friday.

‘My offence always flows pretty naturally but we’ve been working on defence, controlling distance with the jab and avoiding crazy wars. That’s what’ll win me the fight on Friday,’ insists the Ulster action man who was a recipient of the 2016 Fight of the Year Award for his savage eighth round stoppage of South Shields Anthony Nelson.

‘You know, I never go ‘hell for leather’ in sparring. I’m always nice and technical, box and move, very comfortable. But a red mist descends on fight night. If there’s a lull in the action, I feel obliged to give the fans something for their hard earned money!’

World class Belfast battler Jamie Conlan walks the tightrope when he headlines at the Waterfront Hall in his home city this Friday, writes Glynn Evans.

The thrill monger known as ‘The Mexican’ – already rated second by the WBO and ninth by the IBF – seeks to crash the WBC rankings when he collides with Nicaragua’s former world title challenger Yader Cardoza for the International Silver Super-flyweight strap, live on BoxNation.

And with a long overdue world title challenge beckoning, the 30 year old Ulsterman knows there is no margin for error.

‘Hopefully a great performance on Friday will finally lead to a huge fight against a big name at a massive arena,’ says the reigning Commonwealth 115lb king who has won all 18 pro gigs with 11 stoppage wins.

Globally, the 8st 3lb division is awash with elite champions, with P4P contenders Roman Gonzalez and Naoya Inoue nestled on the WBC and WBO thrones, 21-0 Birmingham banger Kal Yafai in possession of the WBA strap and formidable Filipino Jerwin Ancajas wearing the IBF belt. Conlan is frothing for an opportunity to get among them.

‘I’ve been world rated for a wee while now so it’s a bit frustrating but you just have to keep focussing, set small short-term goals and then tick them off,’ says the Danny Vaughan coached bill-topper who has been punching for pay since November 2009..

‘I’ve not seen anything of Ancajas but he’s got a very impressive record (one loss in 28) and he beat a good champion (Puerto Rico’s previously undefeated McJoe Arroyo) to win the title. There’s noise that Naoya Inoue will be moving up to challenge the Jap WBC bantamweight champion (Shinsuke Yamanaka) which could leave an opening for the vacant WBO title.

‘But I leave it all to my team. They’re biding their time but I’ve every confidence they’ll deliver. I’m a strong believer in letting the fighter fight, the trainer train, the manager manage and the promoter promote. We all have our job to do.’

After 28 months on the road, the Mack the Knife managed star returned to his native city last November with a routine eight round shutout over Hungarian road runner David Koos at the Titanic Exhibition Centre. However, Friday’s assignment promises to be altogether more taxing.

‘Last time, it was nice to keep busy but the camp was more beneficial than the fight. I’ve not even watched the tape back,’ he says.

‘I just kept on the jab and listened to the corner, ticked the boxes Danny (Vaughan) wanted me to tick. Now I’ve got a proper fight and I have to show improvement.

‘I boxed at The Waterfront previously on a (Carl) Frampton undercard and it’s a brilliant atmosphere. The crowd’s roar echoes back to you, like an opera or orchestra.’

Opponent Cardoza, a 28 year old from the fine fighting nation that has given us Alexis Arguello, Ricardo Mayorga and Roman Gonzalez, is a veteran of 33 starts across an eight year career that peaked with a May 2013 challenge for the WBC light-flyweight title.

‘His record suggests he’s not the biggest puncher but he throws some wicked shots. He’s very tough and quite unpredictable; dirty with his head and elbows. I’m expecting an exciting fight but I’ve got to stick to my game plan.

‘But to remain relevant, to keep in the thoughts and words of the fans and media, I have to shine. There’s a very strong undercard but mine should still be the fight to stand out. Expect controlled fireworks!’