How many times during his ring career has Julio Cesar Chavez Jr failed to make the agreed weight limit? You’ve probably lost track by now but you can add another digit to the number because, earlier today, ahead of tomorrow’s fight with MMA fighter Anderson Silva, Chavez Jr failed to come in at the agreed catch-weight of 182 pounds.

Chavez Jr instead scaled 184 pounds, this quite clearly a significant amount above the agreed weight. As a result, Chavez Jr has been fined a whopping $100 grand, this pile of cash going to Silva.

Silva, by the way, made weight okay. So it seems that whatever happens in tomorrow’s fight (featuring as it will on the card in Guadalajara, Mexico, headlined by the exhibition bout between Julio Cesar Chavez Snr and Hector Camacho Jr), Silva will be a winner of sorts.

Pocketing a nice $100 grand for doing nothing but watch as his opponent failed to act like a professional, Silva has bagged quite the nice payday.

So has Chavez Jr trained for this fight, and if so, how hard? So many times over the years, we’ve heard Chavez Jr assure us he is all business, that he is focused on his upcoming fight, only for him to then come in heavy and then sometimes fight poorly and even quit. If he loses tomorrow’s fight, Chavez Jr will surely have nowhere to go but into retirement. 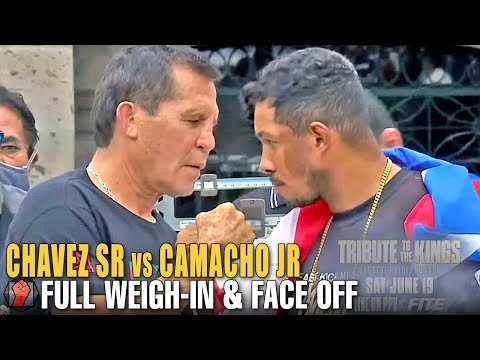 What makes Chavez Jr’s failure to make 182 pounds even worse, is the fact that he has been calling for a rematch with Canelo Alvarez, who he basically ran from in a disappointing affair in May of 2017.

If Chavez Jr cannot make 182 pounds what weight was he hoping to fight Canelo at in a return? Chavez Jr is miles above the light-heavyweight limit these days. To think, Chavez Jr was once the World Boxing Council middleweight champion.

Who knows how much Chavez Jr will weigh when he actually climbs into the ring tomorrow night. Will Chavez Jr be in shape to go more than a few rounds should the fight last that long?