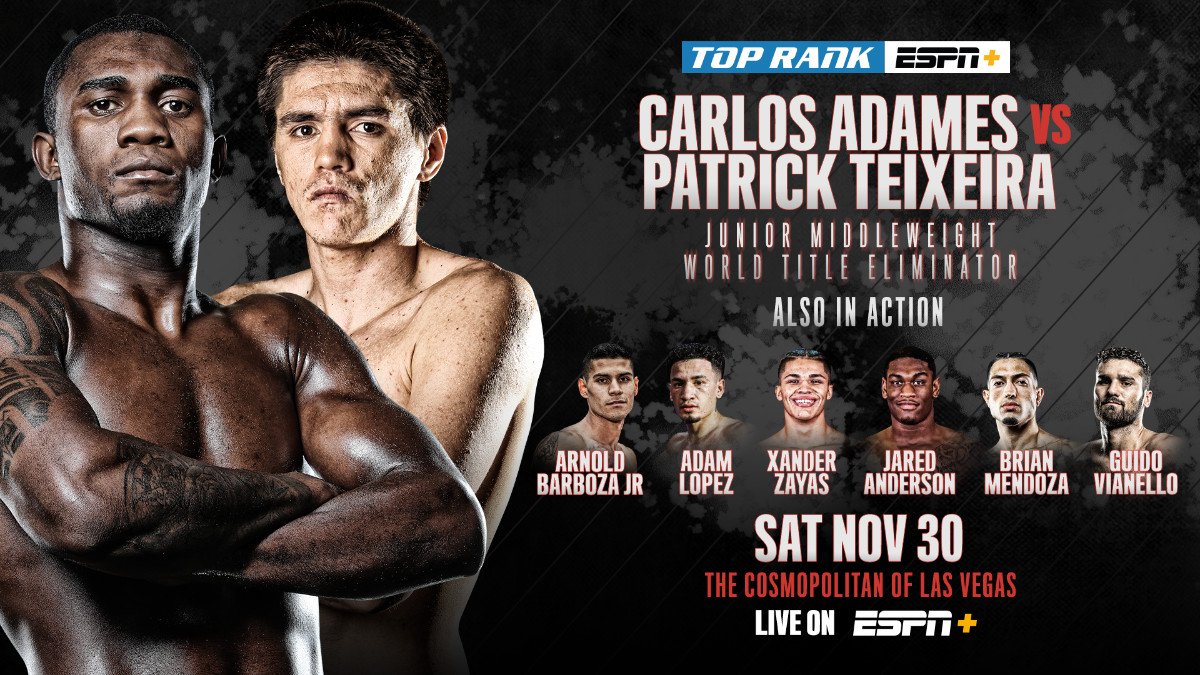 The rising iron-fisted star of the 154-pound division, Carlos “Caballo Bronco” Adames, will lock horns with Patrick Teixeira in a 12-round WBO junior middleweight title eliminator Saturday, Nov. 30 at The Chelsea inside The Cosmopolitan of Las Vegas.

“A victory on November 30 will mean one of the last steps en route to fulfilling my dream of becoming world champion,” Adames said. “Without a doubt, this fight is the most important of my career. There is no room for mistakes. A victory guarantees me the opportunity to challenge for the world title. That’s why I worked hard and conscientiously with my trainer, Robert García. I assure you that the Dominican Republic will have a world champion very soon.”

“I’m very excited to fight Carlos Adames in Las Vegas in this elimination fight for the world title,” Teixiera said. “I’m very happy for this opportunity. It’s an important fight for me because I will be able to pursue my dream of becoming a world champion.”

Adames (18-0, 14 KOs), the WBO No. 1 contender, is 5-0 with three knockouts since making his Top Rank debut on the Vasiliy Lomachenko-Jorge Linares undercard in May 2018. A native of Elías Piña, Dominican Republic, he is 3-0 in 2019, including a fourth-round KO over Frank Galarza to win the NABO junior middleweight title. He defended that belt June 28 with a unanimous decision over the late Patrick Day. Teixeira (30-1, 22 KOs), the WBO No. 2 contender, is seeking to become the next world champion from Brazil. He is 4-0 since suffering the lone defeat of his career, a second-round stoppage to Curtis Stevens at middleweight. A southpaw boxer-puncher, he last fought April 13 in Monterrey, Mexico, defending his WBO Latino junior middleweight belt with a majority decision over Mario Alberto Lozano.

In an all-SoCal battle, Glendale native Adam “Blunose” Lopez (13-1, 6 KOs) will make the first defense of his Junior NABF featherweight belt in a 10-rounder versus Moreno Valley’s Luis Coria (12-2, 7 KOs). Lopez is coming off a come-from-behind KO win May 25 against Puerto Rican prospect Jean Carlos Rivera.

Anderson was Team USA’s top-ranked amateur when he signed with Top Rank in September.

Promoted by Top Rank, in association with Queensberry Promotions and MTK Global, tickets priced at $100, $85, $65, $45 and $20 (general admission) are available online at www.cosmopolitanlasvegas.com or through Ticketmaster at 800.745.3000.