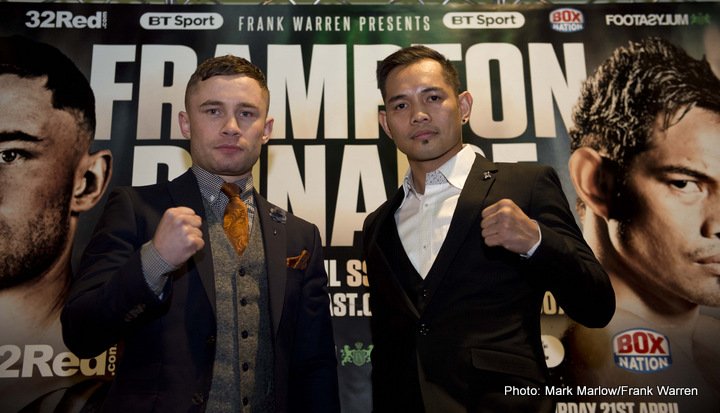 Fights one and two produced some of the finest, most intense lower weight action of recent years, fight-one especially, and featherweight star Carl Frampton is determined to meet Leo Santa Cruz for a third time in a decider. As fans know, Frampton, the former super-bantam and featherweight king, won the first fight with Santa Cruz but lost the return, both fights going all 12 rounds and being close, close, close on the score-cards.

Another similarity the two fights had is they both took place in America – fight-one in New York, fight-two in Las Vegas. So it seems the rubber-match should happen in the UK, right, so as to be fair on Frampton? “The Jackal” sure feels this way, and as he writes in his column for The Belfast Telegraph, Santa Cruz did promise to fight him in a rematch in Belfast. If this doesn’t happen, though, Frampton, 24-1(14) says he will travel to the US once again in order to make this rubber-match a reality.

“Santa Cruz will never come to Belfast,” Frampton declared. “Instead of talking nonsense and sending out excuses for not wanting to come and face me in Belfast, which he said he would do on more than one occasion, he should show some cojones like [Nonito] Donaire and agree to come here or maybe he would prefer it if we had the third fight in an empty hall. But, if push comes to shove and to get that third fight I have to travel then I’ll go to Vegas again.”

Frampton must first get through his April fight with Donaire (no pushover) while Santa Cruz, 34-1-1(19) must get through his rematch with Abner Mares (again, no pushover; their first fight being a classic battle Santa Cruz edged on the cards) but then, in an ideal world, the third fight will happen later this year. In terms of fairness, it should be Santa Cruz packing his passport, but as Frampton says, he will travel again if this is what it takes. And fans everywhere really do deserve to see this rivalry settled once and for all.

In response to claims that Santa Cruz would not get a fair shake from the judges if the Mexican fought Frampton inside his Belfast fortress, the Irish warrior had a clear message:

“They (my fans) know a good fighter and if there’s a bad decision they won’t stand for it even if it is for the local man so Santa Cruz has no excuses for not coming here,” Frampton said via his column.

Though Irish fans would of course prefer to see the third fight take place at home, these same fans would settle for any venue, so long as the decider actually took place. This is one rubber-match that is too good not to happen. Frampton understands this, but does Santa Cruz?