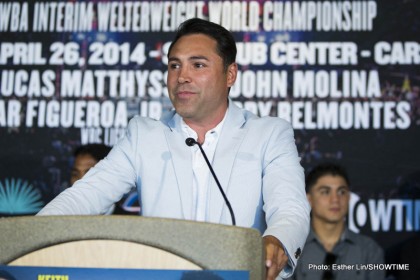 ‘Let’s do it’ is a philosophy that De La Hoya has been keen to expound, having not blinked an eye in throwing David Lemieux to Golovkin last month in what was the French-Canadian’s maiden defence of the IBF middleweight strap he won against Hassan N’Dam in June.

Yet he ostensibly appears not so keen on that ideology with his enormously popular – and not to mention financially lucrative – young Mexican star.

“Let me talk to my team, let me talk to Canelo, let me discuss how he’s feeling and — look, there’s fighters that go up in weight, conquer that division, and come back down, so we don’t know,” he said. “We’ll see. But, is he gonna fight Golovkin? Absolutely, absolutely.

Again, it boils down to the question from fans well aware of the business dynamics of boxing, of ‘when exactly will GGG/Canelo take place?’ While many won’t expect it next irrespective of GGG’s mandatory situation, it’s a fight that simply MUST take place within the next 12 months for the good of boxing and in accordance with Oscar’s own philosophy.

In addition, and despite his post-fight boasts, ‘Canelo’ made much in the build-up to the Cotto fight of not being a true 160 lb fighter – just like his WBC predecessor – winning the middleweight title below the sanctioned limit at a catch-weight, pouring cold water on the notion he will fight Golovkin at the right and proper middleweight limit of 160 lbs.

Have Oscar and Alvarez inadvertently put the rope around their own necks regarding the avoided Kazakh? Will they really take this fight, even if they say they will and won’t vacate the newly won title? How long can they avoid GGG? How aggressively will the WBC pursue the issue of the fight?

We shall soon find out the answers to these questions. 2016 should be interesting.