This time it’s personal. Very personal. It’s no secret that Canelo Alvarez and Caleb Plant do not like each other (not yet, anyway, but some fighters, after sharing the ring together in a tough fight, gain respect for one another and they even end up quite liking each other) – and the two have exchanged words as well as pre-fight punches. Now it’s time for the real fight. Canelo, speaking with the media once again before Saturday’s historic fight in Las Vegas – a fight that will, barring a draw, see one man walk away with all four super-middleweight belts – said this fight is “even more personal than the second [Gennady] Golovkin fight.”

We know how much bad blood and animosity Canelo and GGG had, with the nasty things they said about each other, so it’s perhaps surprising that Canelo is more pumped up, more steamed up for this fight than he was for the 2018 rematch rumble with Golovkin. Canelo is not mixing his words: he wants to lay some serious hurt on Plant. 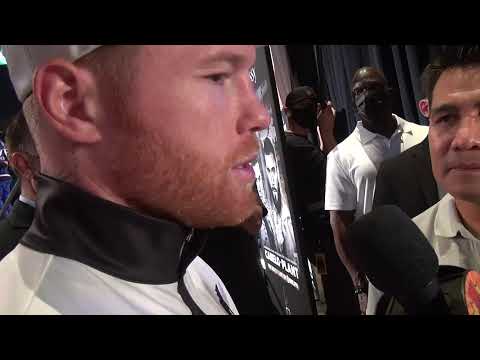 “This fight is personal, even more than the second Golovkin fight, for everything that happened in the press conference in Los Angeles,” Canelo said. “So I will punish Caleb Plant even more, I’m looking forward to hurting my opponent in the ring and I will do so.”

Serious intent, indeed. Plant, however, seems unfazed, with the unbeaten IBF champ coming across as perhaps the most confident Canelo opponent since Golovkin. It might be this air of assurance, this complete and utter refusal to be in any way intimidated by Canelo that has rubbed the Mexican superstar up the wrong way. So once the bell rings, can Canelo punish Plant, or will the taller, perhaps faster Plant outbox, frustrate, even taunt Canelo? Might Canelo, 56-1-2(38) come out trying too hard to get the KO?

It’s a very interesting fight, even if you can find maybe one or two experts at best who really do think Plant, 21-0(12) can pull it off on Saturday. Canelo is a huge favourite, but again, Plant says he likes being the underdog. In terms of mental strength, these two might just be about even. But that’s in terms of the lead-up to the fight. Now all the talking is done and it’s time for business. It’s time for these two men to get up close and personal with one another.

Prediction: Canelo has to fight one of his hardest fights, and he wins a close, perhaps even somewhat debatable decision.