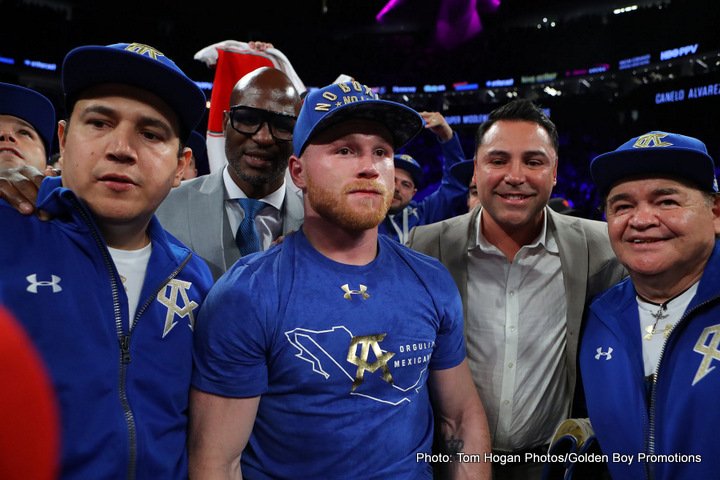 The final punch stats for last Saturday’s massacre win for Saul “Canelo” Alvarez over Julio Cesar Chavez Jr. showed how badly the former WBC middleweight champion was in getting hammered for 12 one-sided rounds at the T-Mobile Arena in Las Vegas, Nevada. In the minds of many boxing fans, the Canelo-Chavez Jr. fight was worse than the Floyd Mayweather Jr. vs. Manny Pacquiao fight from 2015.

There’s probably less complaining about the Canelo vs. Chavez Jr. fight because it had a cheaper price tag of $59.95 compared to the $100 for the Mayweather-Pacquiao fight, but it was just as bad if not worse than that fight for lack of action. Chavez Jr. wouldn’t throw punches, which was totally expected if one had done research in looking back at Chavez Jr’s losses to Sergio Martinez and Andrzej Fonfara.

Chavez Jr. didn’t let his hands go in either of those fights. It’s obvious that Chavez Jr. didn’t deserve the fight with Canelo based on his performances inside the ring in the last 5 years. You can argue that he only got the fight because of his famous last name. The problem for Golden Boy is when you setup mismatches between your fighter Canelo and guys that have no chance like Chavez Jr., you put yourself in a situation where you can lose boxing fans.

It’s definitely good that Golden Boy announced after the fight that Canelo will be fighting Gennady Golovkin on September 16. If they didn’t make that move IMMEDIATELY after the Canelo-Chavez Jr. fight, I think there would have been a lot of angry and bitter boxing fans. Golden Boy needs to make sure they stop picking out of shape and no longer relevant fighters to put in with Canelo. There was no reason for Golden Boy to match Canelo against Amir Khan, James Kirkland, Alfredo Angulo and Chavez Jr. To be sure, those were all good fighters when they were in their prime, but by the time they were matched against Canelo, they had left their best behind thousands of yesterday’s ago. If Golden Boy wants to build Canelo into a star, they need to match him against the best fighters in the sport today, not the best in the sport from 5 to 7 years ago.

If Canelo isn’t good enough to beat fighters from this era, then we need to find that out. We know that Canelo can beat the likes of Liam Smith, Chavez Jr. and Kirkland. We don’t know if he can handle Gennady Golovkin, Jermall Charlo or Daniel Jacobs. Personally, I don’t think he can. Canelo is too small, too weak and too limited when it comes to his ability to throw sustained combinations. He can’t throw sustained combinations for some reason.

Last Saturday, Canelo connected on 228 of 604 punches for a connect percentage of 38, according to CompuBox. For his part, Chavez landed 71 of 302 punches for a connect percentage of 24 percent). It was such a bad fight for the boxing public. Chavez Jr. looked weight drained from having to make the 164.5 catchweight for the fight. Given that he reportedly was over 200 pounds when he started training for the fight, it’s not surprising that he was weakened. That’s a lot of weight to lose. Chavez Jr. is no longer capable of making 168 on a consistent basis.

Putting him in a situation where he had to fight at 164.5 wasn’t even fair. It would be like asking Canelo to go back down to 147 and take on Keith Thurman. Canelo would be too weak to beat Thurman and it would be a mismatch just like last Saturday’s Canelo vs. Chavez Jr. fight ended up being. I think it was a mistake to make Chavez Jr. come down to 164.5, because it setup a situation where the boxing fans were going to see a bad fight. The idea is to put on competitive fights that will make the boxing public want to continue to purchase PPV fights in the future.

Canelo vs. Chavez Jr. had mismatch written all over it the moment the fight was signed. Asking boxing fans to pay to see it was never going to be a good thing for the long range success for future PPV events. You don’t put a bad product on the table ask fans to pay for it if you want them to keep coming back. Hopefully, Golden Boy will match Canelo ONLY with good fighters for the rest of his career, and stop with the mismatches against fighters from shot fighters from the past.

“I wanted to box, but he went to the ropes, and I just needed to throw more punches,” Chavez said. “I would’ve attacked more, but I would’ve been countered by his punches. [Trainer] Nacho [Beristain] told me to do that, but the strategy didn’t work. The speed and the distance was the key. I couldn’t throw as many punches as I wanted. My father kept telling me to throw more punches from the ringside.”