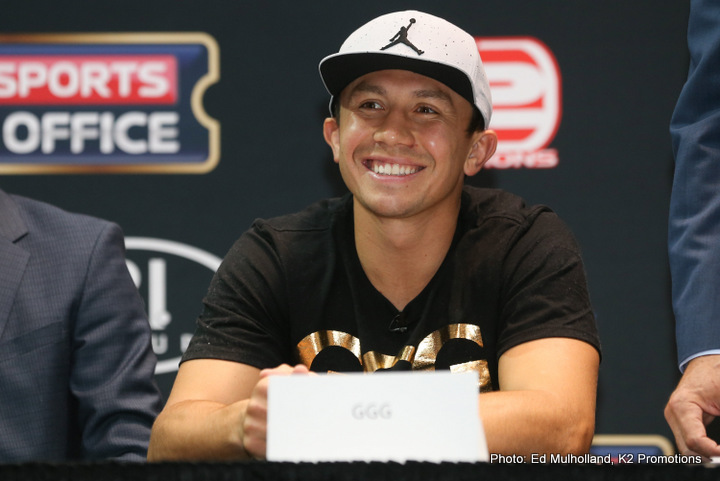 Gennady Golovkin said some interesting things at yesterday’s London press conference to further hype his September 10 clash with IBF welterweight champ Kell Brook. Aside from the customary respect GGG shows towards his opponents – Golovkin stated again how he sees Brook as a serious test, his biggest yet, and he even said the upcoming fight “feels like a unification fight” – the middleweight king also spoke about his hopes to retire from boxing with a perfect, unbeaten record.

At 35-0(32) now, the 34-year-old, who fights on average three times a year, could not only retire unbeaten, he could also conceivably break the immortal Rocky Marciano’s treasured 49-0 record. No, GGG is not a heavyweight or a heavyweight champion (although some of his opponents have said he punches like one!) so Rocky’s record and what it stands for would, well, still stand, but remember all the fuss there was over Floyd Mayweather tying with the “The Rock’s” pristine record? How much furore would there be if Triple-G got to 48-0 or 49-0 – or, dare we say it, 50-0!

At 35-0 now and with a Brook win, which is expected by most fans, experts and critics, set to take him to 36-0, GGG would need a further 13 wins to equal Marciano’s record and one more after that to break it. That would mean GGG would have to fight on until he is aged 38 or getting on for age 39. Possible? Sure. With the way he has gone through his opponents one by one, with either some effort, little effort or seemingly no effort, Golovkin remains fresh, very fresh – some of his admirers claim Golovkin has barely got out of second gear in a pro fight thus far in his dominant career. This freshness and lack of wear and tear would be a huge plus for GGG if he did try and go after that 50-0 record.

As to his future opposition after Brook (and, true pro that he is, GGG says he is not in any way looking past Brook or taking him easily) – only the likes of Canelo Alvarez and, if they can agree a weight at which to fight at, Andre Ward would have a shot at derailing him. And will either of these two actually agree to face the feared puncher? Who knows, a future star we have scarcely heard of might burst onto the scene in two or three years and challenge GGG and shock him, but right now, Golovkin’s goal of retiring unbeaten looks a most realistic one.

The modest pound-for-pounder has not yet even spoken about any desire of breaking Marciano’s record (and maybe it is not even anything he has thought of) but the way he’s going, that too looks to be hittable target. Of course, Kell Brook would disagree.