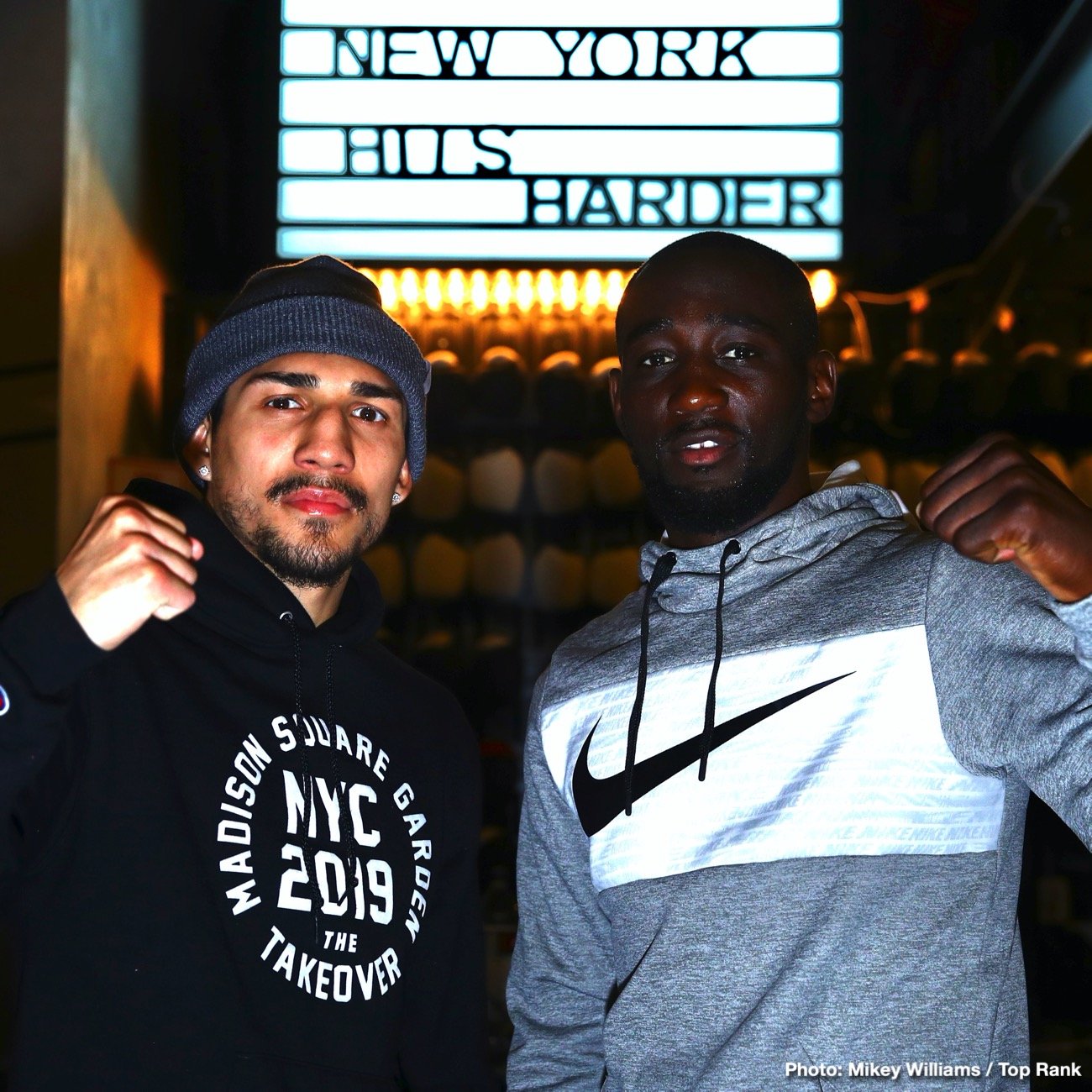 This Saturday night immediately following the Heisman Trophy award show the ESPN tripleheader broadcast begins which features Terence Crawford’s return and a very intriguing matchup between Teofimo Lopez and Richard Commey at 135. In the opener Michael Conlan faces a familiar foe in Vladimir Nikitin whom Conlan lost to twice in the unpaid ranks. Bud’s opponent is Egidijus Kavaliauskas aka ‘Mean Machine’ who has an unbeaten record but is untested at the top level.

Kavaliauskas is a subpar fight that Crawford must take at 147 while he waits for a major one against Errol Spence. After dominating the 135 and 140 pound divisions Terence ventured up to welterweight to face Jeff Horn in June of 2018 for a WBO strap. To no one’s surprise Crawford took apart Horn which led to Jose Benavidez last October on ESPN with a key time slot post College Football. Benavidez fought hard but Bud separated himself per usual.

In April Amir Khan was chosen as a ‘B-Side’ to Crawford for an ESPN PPV role out. The numbers didn’t pan out the way they had planned so now it’s back to the drawing board in an attempt to drum up more exposure for one of the best pound for pound fighters in the sport. Terence shouldn’t have many problems with Egidijus beyond maybe a round or two we’ve seen Crawford give away only to close the show in the end. Kavaliauskas’s last fight was a draw against Ray Robinson back in March.

The lackluster matchup in the main event is obviously due to the lack of high level welterweights in the Top Rank stable. Not all that long ago Terence decided to extend his contract and sign a long-term deal with Top Rank. It’s great in the short term for Bud’s bank account getting a hefty guarantee every time out regardless of Bob’s lack of options. As far as long term branding goes and legacy it doesn’t bold well for Crawford until he can get some better names in the ring to show his true worth. Exposure on ESPN with a solid lead in does help but without a dancing partner Crawford will be stuck practicing his dance moves in the mirror. Time will tell if it was the right move to resign with Top Rank. Hopefully his promoter Bob Arum is not just blowing smoke up Bud’s or our asses and a Shawn Porter offer gets delivered properly. Bob has also mentioned names at 140 such as Josh Taylor, Regis Prograis, and Jose Ramirez as possible for 2020.

As previously mentioned Crawford does have some fights in the early rounds were he gets hit maybe this will be one of those. Either way it’s only a matter of time before Bud figures Kavaliauska out and disassembles the mean machine.

My Official Prediction is Terence Crawford by late stoppage.

The fight drawing the most anticipation on Saturday is IBF belt holder Richard Commey against Teofimo Lopez with the winner ear-marked for a date with the ultra-skilled Vasiliy Lomachenko next spring. Teofimo Lopez looks every bit the part of a showman with a big mouth son and father combo to boot. Lopez has the flashy footwork, accurate punching and his power has appeared to be deadly when fully focused. His recent training camp before this fight was a mix bag of distractions and weight issues thus producing on uneven performance versus Masayoshi Nakatani in July. The talented Teofimo is still brash and his father claims they will wipe the floor with Commey and from the sounds of it they had a good camp. Whatever the reality for the out of the ring issues is, Lopez and company better be ready for Richard Commey.

In 2016 Commey lost back to back fights in a span of less than 3 months. Both were extremely competitive with Commey not able to cross the finish line with his hand raised. His fight with Robert Easter Jr. could’ve gone either way this podcaster thinks the Ghanaian did enough to earn victory. Less than 3 months later it seemed Commey was a half-step slow possibly the quick turnaround from a grueling Easter bout played a part. 7-5 in favor of Denis Shafikov or maybe 6-6 is the most I could see for Commey but a valiant effort regardless. Commey put together 5 victories in a row and has a great opportunity to stake his claim at the lightweight division.

The question pertaining to Teofimo biting off more than he can chew at the 15-fight mark is a legit one. Commey, like many Ghana boxers, brings a relentless fighting spirit that won’t be swayed by pre-fight talk. Commey is aggressive on offense but isn’t as reckless as some other come-forward guys. Richard has a fair amount of power and a good chin that should allow him to hold up to much of what Lopez has in store. This young cat Lopez does seem to have something special about him. Talk is cheap unless you can back it up and it appears Teofimo is comfortable in the heel role. Lopez does have a skill set to be offensively accurate and explosive. His defense if made up of head and upper body movement along with fast feet to change angles in a heartbeat. If Lopez is chasing another highlight-reel KO to be plastered on ESPN he may get a dose of his own medicine. If Lopez is patient with his attack and looks to use his complete arsenal he will get the win.

Commey will probably have to take two or three punches to land his heavy shots while he tries to close the gap. Commey does have a reach advantage but it will only help him at the mid-range while both men are punching, to catch Lopez at the end of his punches. This boxing fanatic doesn’t expect Commey to fight at range once the bell rings, within say 2 or 3 rounds Commey must get into Teofimo’s chest and make it a dog fight. Flustering Lopez on the inside making use of his free hand and roughing him up in general could get the Brooklyn native out of his comfort zone. This fight may turn out to be a cat and mouse chase but with both taking turns being effective at what they want to accomplish instead of a non-action pace.

Commey will have to land something significant in the first chunk of rounds to demand Lopez’s respect and so Lopez doesn’t open up with fast combinations. If Teofimo uses his angles and timing with enough space as to not be smothered, his speed will overwhelm Commey enough to negate his effectiveness. Body shots and punches to the hip is a must for Richard as he takes the fight to Lopez. Speaking of smothering shots, Commey will need to make sure that doesn’t happen instead of being clinched because he’s too close to Lopez. At the end of the day beyond the moments that could last up to a minute within the rounds or a full frame for Commey, Lopez will outpoint him. The outside skill and movement will be too much for Commey’s defense to keep up with. Not calling for a knockout but by the last third of the fight it will be Teofimo landing the cleaner punches.

My Official Predictions is Teofimo Lopez by Unanimous Decision.

Side Note: Michael Conlan gets a shot at revenge from a controversial loss in the 2016 Olympic Games to Vladimir Nikitin. My Prediction is Conlan by UD.

Written by Chris Carlson Host /Producer of The Rope A Dope Radio Podcast Available at www.blogtalkradio.com/ropeadoperadio & Follow on Twitter @RopeADopeRadio