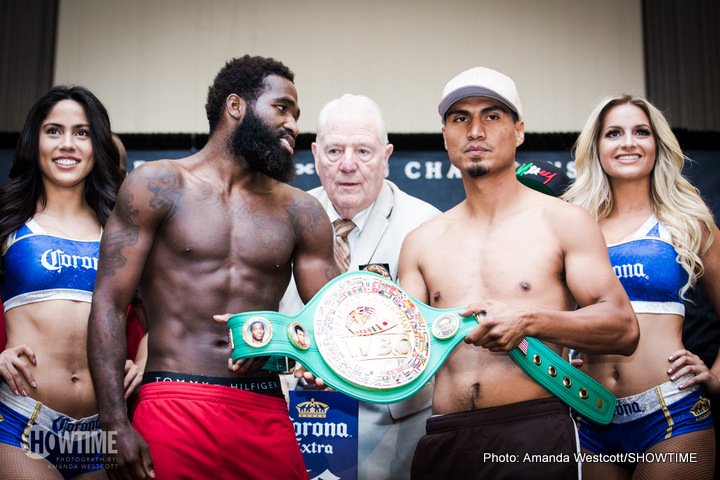 The only thing close to a blemish on the 36-0 record of Mikey Garcia came in his 2013 technical decision win over ultra-tough Mexican warrior Orlando Salido. Then fighting down at featherweight and challenging Salido for the WBO belt, Garcia knocked Salido down four times, before “Siri” came back, and then came on.

A clash of heads saw Garcia, then 30-0, suffer a badly busted nose, and the fight was stopped with the TD victory going the Californian’s way. Salido, his supporters claim, might have finished strong enough to have won the January 2013 battle; maybe even by stoppage.

And Adrien Broner, who of course faces Garcia in a must-win clash in New York tonight, says Mikey “quit” against Salido, and that when he himself is “110-percent,” he can “make anybody quit.”

Broner is a 2/1 underdog going into the 140 pound non-title fight showdown, but he certainly has his supporters. Broner himself is talking a great fight.

“I know he quit,” Broner said of Garcia as quoted by RingTV.com. “Salido should’ve won that fight. [And] I can make anybody quit when I’m 110-percent. He [Garcia] ain’t no f***n’ [Marcos] Maidana, and they know that. He feels like he gonna win, too, but this motherf***a ain’t gonna beat me.”

So, is there a chance that Garcia might look for a way out if things get too hot for him tonight? Is this what happened in the Salido fight, as Broner claims? To Broner’s credit, he sucked it up and never gave in in his rough and tough fight with Maidana, eventually losing a 12 round decision and his unbeaten record. And in his other loss, to Shawn Porter, Broner was in less than top shape and even here he scored a heavy knockdown in the fading minutes of the 12-rounder.

Both Broner and Garcia look to be in excellent shape for this fight, and we might just have a classic taking place in just a few hours time. Broner, his back to the wall, needs a career-best performance. Maybe he will deliver one.