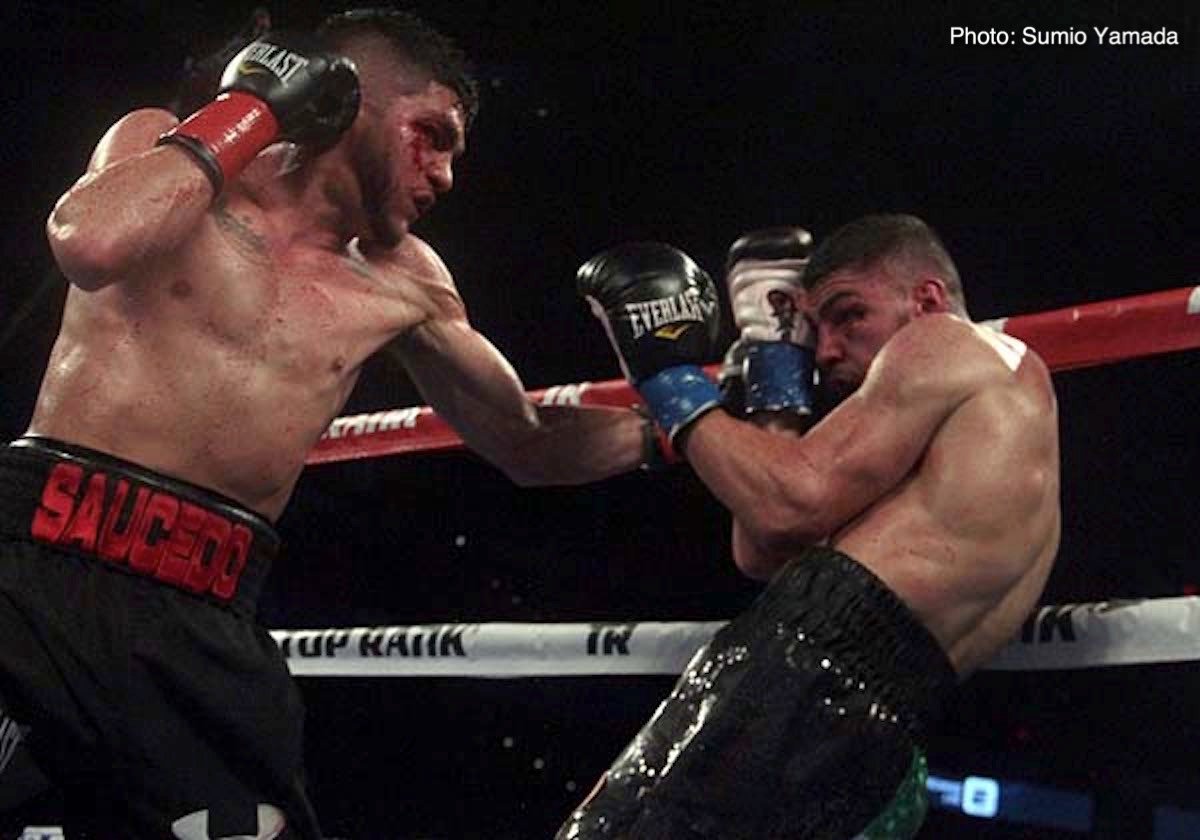 Last night on the Ramirez-Roamer Angulo card, 140 pound warriors Alex Saucedo and Lenny Zappavigna stole the show. Going to war in a battle that was soon a bloody affair courtesy of the nasty facial injuries “Lenny Z” suffered, the two gave everything they had.

In the end, in a fight that had something truly special in round-four, Saucedo retained his unbeaten record with a seventh-round TKO. Now 28-0(17) Saucedo is in line for a world title shot. Zappavigna falls to 37-4(27) and he was involved in yet another punishing fight.

The pace was a hot one from the start and it remained so, with barely a clinch in sight. The two threw a ton of leather and neither man was willing to yield. Saucedo, younger and fresher at age 24 to 30 for Lenny Z, decked his man in the third and it looked as though the man from Oklahoma City might have a relatively short night.

But then, in the fourth, we got a simply incredible three-minutes of warfare. Lenny Z, knowing his career at top level was pretty much on the line, came roaring back at his rival, throwing everything he had and having some notable success. Saucedo was hurt no doubt but he showed heart in digging in and seeing it through to the bell.

Lenny Z, who suffers cuts in a good number of his fights, was busted up bad by now, his eyes bleeding profusely, his left eye hammered shut tight. There was no quit in the older man from Australia but the fight was stopped in the seventh. There was so much blood in the ring at this time that the commentators were reminded of horror films.

Up at heavyweight, Trey Lippe-Morrison and Byron Polley also gave us a fun fight. The son of the late Tommy Morrison decked journeyman Polley five times, including two times in the opening round, before laying him out flat on his back in the third. Morrison is now 15-0(15) Polley, who gave it a go and did manage to catch the 28 year old with a couple of head shots, is now 30-23-1(13).

Every time 38 year old Polley got up from a knockdown the crowd cheered, recognising his bravery. It was 95 percent one-way traffic but Polley did come to fight. Morrison certainly needs to work on a number of things before he moves up in class; his defence especially.