Although Artur Beterbiev is a significant favourite to defeat rival light-heavyweight champ Joe Smith Jr on Saturday night when they collide at Madison Square Garden (of the 20 experts polled by RingTV.com, all but one pick Beterbiev to win, 18 of them by stoppage), there is every chance we could see something special. Something super-violent. A war – for however long the fight lasts.

Beterbiev, 17-0(17) and the reigning and defending WBC/IBF 175 pound champ, has not once been forced to go the distance in a pro fight. That really is quite something. The Russian tank may be 37 years of age, yet not too many people see any obvious weaknesses in his formidable arsenal. Immensely strong as well as brutally power-packed, Beterbiev might be the best light-heavyweight in the world today; and as talented as countryman Dmitry Bivol has shown himself to be, that’s saying something. 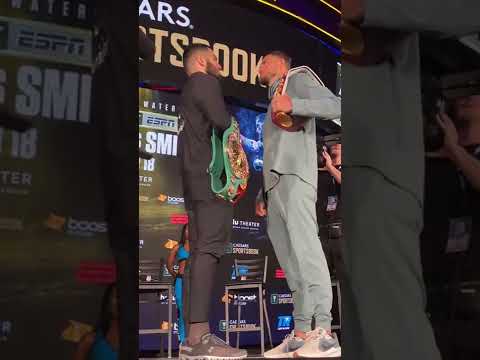 New York’s Smith Jr, 28-3(22) and the reigning and defending WBO 175 pound boss, has the seemingly mighty task of bringing Beterbiev down. It won’t be easy but easy fights are not music to Smith’s ears, or fists. Since losing to Bivol, this via decision back in March of 2019, the 32 year old from Long Island has won four in a row, included here good wins over tough operators Jesse Hart, Eleider Alvarez and Maxim Vlasov. Smith Jr is ready for war on Saturday night.

Stopped just once, this way back in 2010, Smith knows how mighty the riches will be if he can defeat Beterbiev. In terms of style and what kind of a fight we can expect to see, it’s pretty straightforward: Beterbiev and Smith Jr will walk forward and look to test one another’s chin with bombs. It could be a short and sweet slugfest, it could be a gruelling battle that asks both men who wants it more. Or it could be a fight that ends via highlight reel KO. One thing Beterbiev-Smith Jr will NOT be is a dull fight.

Smith Jr is the outsider and as dangerous, as rock-solid, as seemingly unstoppable as Beterbiev is, it’s not hard to see why. Smith does have some supporters (Sergio Mora, taking part in the Ring poll, is going out on one big limb in picking Smith to win, by ninth round TKO at that!) but Beterbiev is seen by most as too good in all areas.

Look for both men to take turns dishing out and taking some real hurt in a fight that just might prove to be one of the year’s most memorable.

Pick: Beterbiev, simply refusing to be fazed, will walk through Smith’s shots to get the mid-rounds stoppage win.