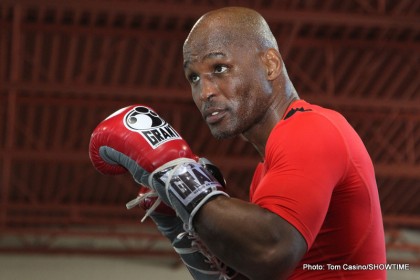 Bernard Hopkins is a living legend and he has been upsetting odds, and much younger fighters, for a long time now. In fact, Hopkins is one of those fighters who seems to have been around forever. Hopkins, however, is not like any other fighter today, or of the last 30, maybe even 40 or more years. A true phenomenon who has made “age means nothing to me” his rallying cry for so long now, B-Hop, or “The Alien,” or whatever you want to call the 49-year-old all time great, has outlined for Ring Magazine’s web site his plans for this year and next year.

At a time when nearly all fighters anywhere close to his age are long into retirement, Hopkins is planning on taking on the two killers, or at least killer punchers, of his weight class. Hopkins told Ring how he and Oscar De La Hoya of Golden Boy are currently in talks with Kathy Duva of Main Events, the subject of their talks being a Hopkins-Sergey Kovalev fight to take place in New York, on HBO, on November 8th. There’s more: Hopkins says that after he’s beaten Kovalev, he wants to fight Adonis Stevenson “after I’ve turned 50.” For the record, Hopkins hit his half century in January of 2015.

Neither fight is anywhere near a done deal yet, but the fact that Hopkins is calling out both hard hitters – to, as he puts it, “make history” – shows once again how special a prizefighter he really is. You can pretty much forget the belts that would be on the line in these two fights; these match-ups would prove hugely interesting to all fight fans if they were non-title affairs. But is Hopkins pushing his luck if he takes on one or both bangers?

It may be a dumb question as far as Hopkins is concerned, and he’d sure tell you himself that, as far as his odds defying wins go, luck has not come into it. But if people thought Hopkins’ age would catch up with him back when he was shocking guys like Antonio Tarver, Kelly Pavlik and, more recently, Jean Pascal, the thinking will likely be that against Kovalev and/or Stevenson Hopkins is biting off more than he can chew.

Hopkins would surely need his entire bag of tricks, his solid chin and every ounce of the cunning he possesses to defeat “Krusher” Kovalev or “Superman” Stevenson. Sure, Kovalev can be crude at times and outboxed, while Stevenson looked far from impressive in the later rounds of his last fight; where he appeared to run out of gas against tough Andrzej Fonfara. And maybe, even at age 50, Hopkins can mess one or both light-heavyweights around, confuse and frustrate them and win a close decision. After all he’s done, Hopkins deserves to be given a chance of a win, that’s for sure.

But the very real possibility of seeing this legend stretched out on the mat exists in either fight, one with Kovalev especially. Maybe that’s what some fans want to see, and maybe these same fans would say Hopkins did indeed push his luck and got what he deserved should this scenario unfold. But Hopkins must be applauded for having the sheer chutzpah to ask for these dangerous fights and then taking them. It is indeed, all about legacy for Hopkins.

Having a habit of ruining promising careers as he has (Hopkins did it to Pavlik, Tarver, arguably Jermain Taylor who actually managed to decision him twice, to name just three examples), B-Hop is shooting for more pages in the history books. Should he upset one or both of the dangerous fighters he’s shooting for, Hopkins will have a whole section devoted just to him.

The onetime “Executioner” famously allows himself a piece of cheesecake after a victory (this being the only “vice” Hopkins has) – should he beat Kovalev, he will be more than entitled to allow himself at least two pieces!