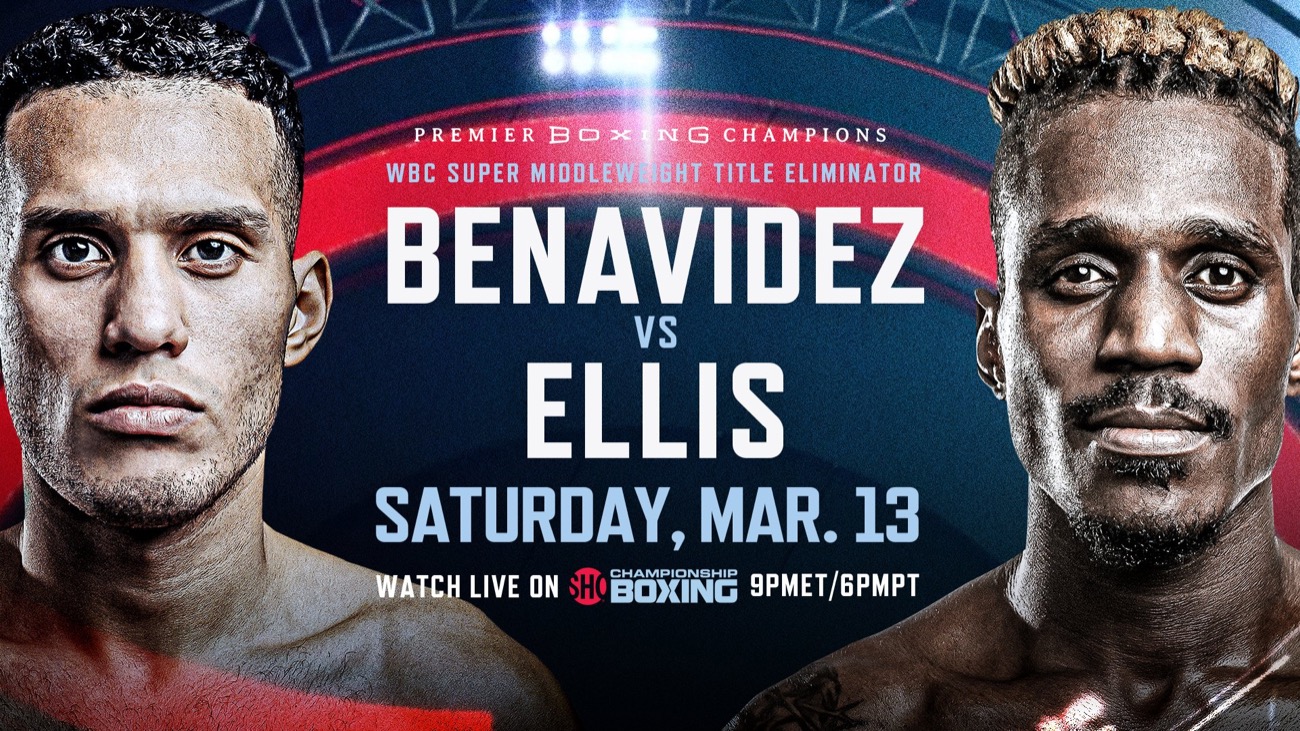 David Benavidez will be taking a nice tune-up fight this Saturday night, March 13th against Ronald Ellis on Showtime. This is a Premier Boxing Champions event, starting at 9 pm ET.  Benavidez wants to look good in beating Ellis to make a statement to the rest of the 168lb division, particularly to Canelo Alvarez, who he feels is ducking him.

Benavidez (23-0, 20 KOs) no longer holds the WBC super middleweight title after losing the strap on the scales last August, but he’s hoping to put himself back in a position to fight for his old title.

Benavidez would like to be the one that faces WBA/WBC super middleweight champion Canelo Alvarez in September, but for that to happen, he would need to take IBF champ Caleb Plant’s belt from him.

If Plant would face Benavidez in the next three months, the winner could meet Canelo in September for the undisputed championship at 168, and it would be a much bigger fight. Plant shared with Canelo the lack of interest in fighting Benavidez.

Unfortunately, Plant has decided that he wants to sit and wait until September and face Canelo without taking an unnecessary fight in between.

If this was a different era with the old-time blood & guts type fighters from the past, Benavidez would have no problems getting a fight against the IBF champion, but not now.

Boxing has changed, and it’s more of a business with carefully managed fighters, who tend to face weak opposition to become paper champions, and they bide their time until they can hit the lottery against popular guys like Canelo.

You hate to say it, but it sure does look like that’s what Plant is doing.

With a victory over Ellis, Benavidez will be Canelo Alvarez’s WBC mandatory, but that still doesn’t guarantee him a fight against the champion.

Due to the World Boxing Council’s decision to make Canelo a Franchise champion, he can decide whether to take the fight with Benavidez or not.

This wouldn’t be an issue if the WBC already had another champion in place at 168 like they do at 160. In that weight class, Canelo is the Franchise champion, and Jermall Charlo the WBC middleweight champ.

At 168, there’s only Canelo holding the WBC Franchise tag, and there’s no way of forcing him to fight his mandatory if he decides he doesn’t want to take the fight.

Two weeks ago, Canelo chose to defend against his WBC mandatory Avni Yildirim, but that was against his sparring partner, who hadn’t fought in two years and was coming off a loss.

“When I had the belt, he went around everybody, he offered everybody a fight,” said Benavidez to TMZ about Canelo. “I had never got, never. They never contacted me, they never said nothing.”

Benavidez’s opponent Ronald Ellis has wins over these fighters:

Ellis’s only career loss came at the hands of DeAndre Ware in a narrow 10 round majority decision in 2019. It would say a lot about Benavidez if he can dominate Ellis, and knock him out as easily as he did his last opponent Roamer Alexis Angulo.