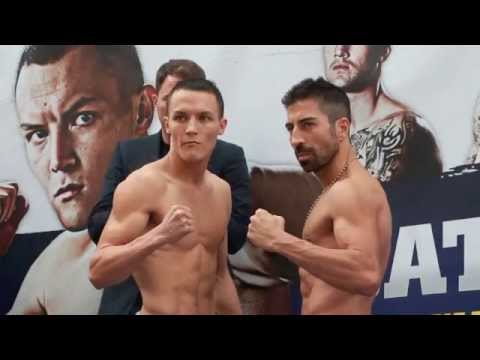 When Eddie Hearn described Josh Warrington as “The biggest ticket seller in the country right now” he wasn’t kidding. Alone, Warrington has shifted 1500+ tickets, for what is the first fight in a bumper 5 fight deal with Matchroom, that’s no joke, in fact it’s a following that would embarrass many World Champions.

It takes a special character to inspire that sort of passion within a community, to encourage them to come out and commit their support and very few fighters have managed to do it. There will probably be many schools of thought on what it is exactly that makes a fighter popular, because its not just skill, Guillermo Rigondeaux can attest to that. In many ways, it’s intangible, but for me personally, in Britain at least, it comes down to three things, an exciting all action style, personality and the ability to identify with your fans, Josh Warrington has all three.

So, when he emerges from his dressing room tomorrow night, he will do so with the vociferous backing of a packed out First Direct Arena, scenes which he could only dream of when he faced Ian Bailey for the English Featherweight title in the Banqueting Suite at Elland Road no more than a year ago. Warrington captured the title by landslide decision on all 3 scorecard and hasn’t looked back since.

First up it was the fancied and previously unbeaten Samir Mouneimne, who Warrington dispatched in the 12th to attain the first stoppage win of his career, in front of the watching Sky cameras. This was a real breakout performance from the young Yorkshireman, who shone the brightest on a show containing Tommy Coyle and Olympic Gold Medalist Luke Campbell in his third contest.

He was rewarded with a real crossroads fight, against former world title challenger Rendall Munroe, on a huge card in Manchester. Warrington was tremendous, outworking, outpunching and ultimately outclassing the brave, but tired and broken Munroe who was stopped in his corner after 7. This was a notable victory, but Warrington wasn’t satisfied and returned a little over a month later in a battle for the vacant British Featherweight title, against the seasoned Martin Lindsay.

Warrington produced arguably his best performance to date, in a fight were he was just a little too strong and a little two fresh for the Irishman, who found the Yorkshireman’s superb work rate, slick combinations and variety to the body too much to contend with.

Although little is known of Dieli Italian fighters are a tough breed, something which Emiliano Marsili and Leonard Bundu have shown in spades during past visits to the British Isles. I don’t expect Dieli to be of that caliber, but he will be tough and represent a test for the in form Warrington. A test I don’t expect him to fail, the stage and the carrot are far too big for failure. I’m going for a late stoppage victory for the Leeds man.

At 23, Warrington has been matched tough and has come through with flying colours and can look forward to a bright future, he has the fans, the promotional backing and the style that has the opportunity to make him a real threat on the world stage, but no rush, job one is disposing of Davide Dieli and I have him doing it in style.