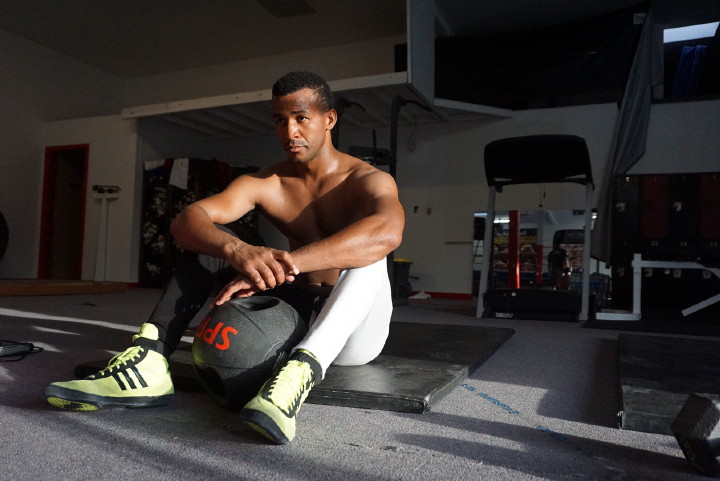 Both fighters have been training in Las Vegas before they head to southern Florida for their world title battle. Barthelemy trains with Ismael Salas at the Salas Boxing Academy while Bey works with his longtime trainer Floyd Mayweather Sr. at the Mayweather Boxing Club.

Tickets for the live event, which is promoted by Kings Promotions, Mayweather Promotions and Panther Promotions, are priced at $130, $80, $60 and $35 (additional fees may apply) and are on sale now. All seats are reserved and available at all Ticketmaster outlets, online at www.myhrl.com,www.ticketmaster.com or charge by phone: 1-800-745-3000. Doors open at 5:30 pm, with the first fight set to begin at 6:30 p.m.

Here is what the fighters had to say about training camp, their matchup and more:

What advantages do you believe you have because of your training team?

Rances Barthelemy: “To me, Ismael is the best trainer in the world. He was the lead trainer of the Cuban National Team at the time that Cuban amateur boxing was having its most success. He is truly underrated and I do not know why.

“Having gone through different trainers throughout my career, I am glad that I found Salas. We clicked right off the bat, and him being a Cuban and having a successful background both in the Cuban amateur system and in the pros, he’s been able to incorporate the best from both worlds in his training methods. He has also been able to bring out abilities in me that others were not able to and it has made me a completely different fighter.”

Mickey Bey: “Floyd Sr. has been my trainer for about 12 years. We’ve been together since I was a teenager and before I turned pro. He is an old school trainer and he knows the science of boxing.

“Being around the other Mayweather Promotions fighters provides a lot of energy to training because everybody is striving to be the best they can be. Whenever that’s the case it’s always a positive thing because the trainers know that’s what you’re after. Floyd Sr. and Floyd are the reason I moved to Las Vegas. It’s been a blessing to be able to train with him for so long. We gelled from the beginning and I have definitely grown a lot as a fighter.”

What does fighting for this belt mean to you?

MB: “Winning back this belt is really important to me. I still feel like it’s mine. He’s just been keeping it warm for me. I had to deal with the injuries but now I don’t have to worry about babying my hand or anything like that.”

What do you think this fight will be like stylistically?

RB: “I plan on this being a great fight between two great boxers. He has a great amateur and pro background, as do I, and hopefully that makes for a great show.”

MB: “You never really know until you’re in the ring but it’s going to be a fight between two skilled boxers. I have seen some footage but not too much because I don’t really watch much tape. I saw him fight for my vacant belt but I can’t get caught up in that because I’m different than anybody he’s ever fought. I’m a lot more difficult than he probably thinks.”

What skill advantages do you believe you have over your opponent?

RB: “I feel I am the better all-around fighter. I have the reach, height and power over him. I feel he has shown in the past that he can’t take a good punch, so we will see if he can take mine.”

MB: “I bring it all. I can do everything that can be done in the ring. Every single department, period. I do think he’s a good fighter, I give him his props, he’s a two-time world champion, but I don’t think he can do one thing better than me.”

What did you learn from your fight with Denis Shafikov?

RB: “It was a really tough fight and definitely a great learning experience. I made it tougher than it should have been but I had never been in a war like that before and adrenaline kicked in. The blood made me want to dig down and trade with him in the center of the ring and beat him at his own game. It was the first time I had to go down to the trenches and engage in a fight like that but I wanted to do it to show that not all Cubans are boring and only box around.”

What did you learn from your fight with Miguel Vazquez?

MB: “I found out how good I was because I was able to beat a guy that good with one hand. Going into it I already knew I was going to be fighting with one hand since it had been giving me problems. I couldn’t let both hands go, so I had to strategically land more accurate shots. I couldn’t let it become a high volume fight because I knew I wouldn’t be able to respond with both hands. This is my first fight in four or five years with two good hands, so it’s going to be a completely different ball game.”

What does it mean to you to fight in south Florida in front of your Cuban fans?

RB: “That’s my backyard and it’s another advantage for me. It is like being in a free Cuba pretty much and I don’t think I’ll ever feel as comfortable fighting anywhere else with the majority of the people being there to support me. It means the world to me to be able to fight in front of my fans and my closest friends. It’s the closest thing to being able to fight in my country.”

Are you concerned about fighting on the road in front of a crowd that is expected to be for your opponent?

What are your plans after this fight?

RB: “I will be headed straight to the Cuban Embassy in Washington, D.C. after the fight to try to obtain a visa so I can finally return to Cuba and visit my family that I have not seen since my defection eight years ago. I thought I would never be able to return but now I will be returning as a two-time world champion with grand dreams of one day headlining the first pro boxing event in Cuba.”

Why do you believe you’ll be victorious on June 3?

RB: “I feel I am levels above Mickey Bey in all aspects of the game. I am comfortable with my training and I plan on returning to Miami with my second world title. The adrenaline of fighting in front of my Cuban people will add fuel to my fire and propel me to victory. I am on a mission to be great and leave an imprint in the sport and Mickey Bey is in the way.”