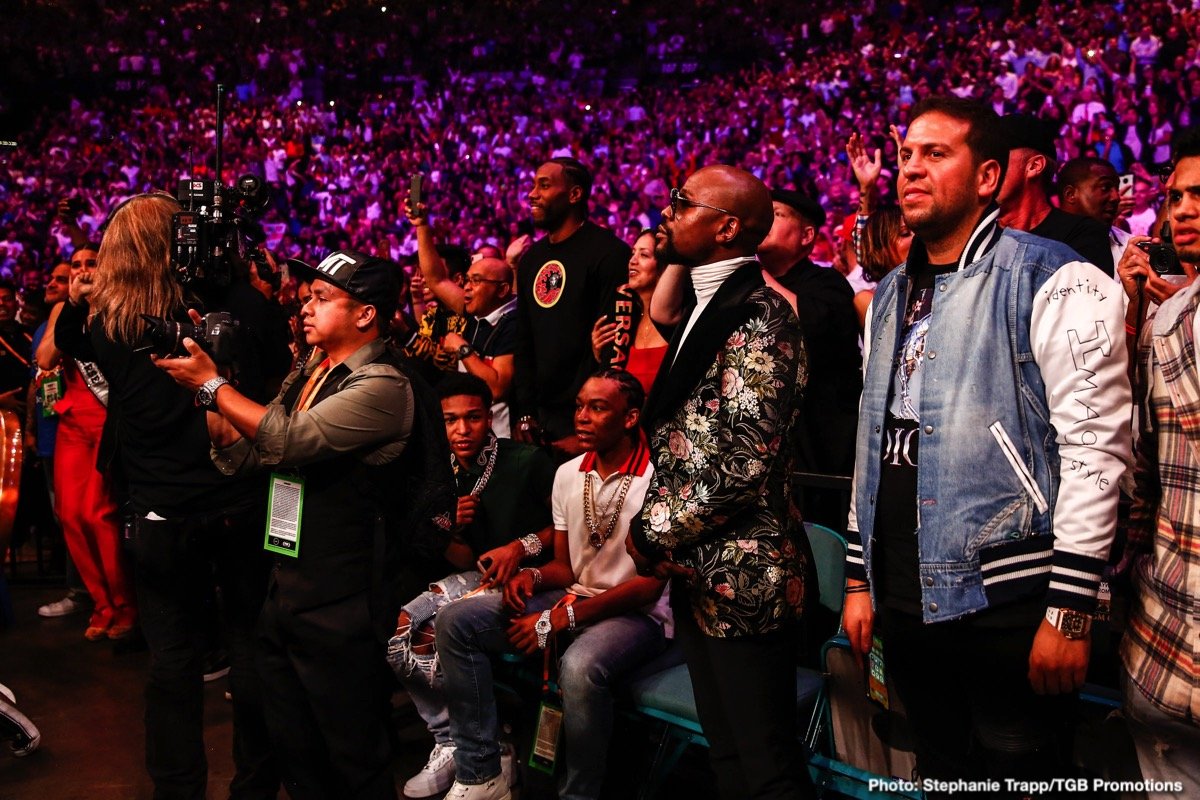 Promoter and former world champion Floyd Mayweather Jr. wants the younger fighters to know that the crazy money they were getting before the pandemic won’t be the same after boxing restarts in the future.

There’s an argument to be made that fighters have been getting overpaid for the poor matches they’ve been put in with. You can understand a fighter getting crazy money if they’re beating talented guys, but that’s not been happening.

The money won’t be the same, according to Mayweather, because the fights will be without fans initially. However, Floyd does expect boxing to come back to where it was previously, but he doesn’t know when that’ll be.

If the pandemic lingers for years, it’s going to wipe live audiences.

One good thing that could come of the pandemic is the promoters like Mayweather will have more pressure on them to make more competitive fights instead of the typical mismatches that fans have been stuck with for years. Nowadays, it’s so rare to see a competitive boxing match where fans view it as a 50-50 fight.

For example, Mayweather Promotions fighter Gervonta ‘Tank’ Davis was recently matched against a shot Yuriorkis Gamboa in a fight that wasn’t even remotely interesting to watch. Unfortunately, this par for the course with the way that Tank has been matched during his career.

The money won’t be the same

“When it’s something of this magnitude, you can’t really do anything. You just have to wait it out and see what happens,” said Mayweather to Fighthype on the pandemic. “Eventually, everything will get back to normal, but it takes time.

“There’s no rush. I’m pretty sure that the young fighters want to get out there and fight, and go out and display their skills and test their skills against other unique fighters. There’s nothing we can do at this particular time, but wait.

“From what I’m told, there’s not going to be an audience, and it’s going to be crazy with the money. A lot of fighters are going to want what they’d been getting, but when there’s no audience, how can we do that?

“Also, television, of course, is a lot of money. The arenas and the stadiums are filling up. That’s a lot of cash flow right there. What I’m told is there’s not going to be any people in attendance when these events start, so it’s crazy,” said Mayweather.

When you see horrible mismatches between Mayweather and Conor McGregor, it’s not good for the sport. Hopefully, the pandemic changes that, and we can see more competitive fights between fighters that will make for appealing fights.

The television money will still be there for the famous fighters. Still, the networks will likely put pressure on the promoters to put together more competitive fights instead of the standard unappealing matches.

It would be nice to see Mayweather follow Hearn’s lead and let Tank Davis fight Lomachenko, Teofimo, Haney, Ryan Garcia, and some of the guys from the 140-pound vision.

Boxing fans would like to see Tank face Josh Taylor, Jose Ramirez, and Regis Prograis. The fact that Tank is already struggling to make the 135-pound limit suggests that it won’t be long before he eats his way out of the lightweight division and is forced to move up to 140.

“As far as all these young fighters, I’m just honest,” said Mayweather. “If a fighter is looking for a manager, you’ve got to go to Al Haymon. If a fighter is not signed with Al Haymon, and if a fighter, if Al Haymon is not a fighter’s manager, then they’re in the wrong sport.

As you can see, Mayweather starts losing his train of thought and veering off course with the topic of conversation. Instead of keeping the subject on the young fighters, he starts talking about himself and bragging about his life instead of the lives of the young boxers that fans want to hear about.

Mayweather had his time, and fans want to hear about the boxers and not about how much money he has.

Young fighters have a lot of options available to them when it comes to signing with different management. A lot of them are doing well with other management, and they may not want to sign with Haymon or Mayweather Promotions.

Although Mayweather does have a good fighter in Gervonta Davis in his stable, not all of his guys go on to become stars. Even Davis still hasn’t beaten anyone of note during his career. His best win was again a shot 38-year-old Yuriorkis Gamboa.