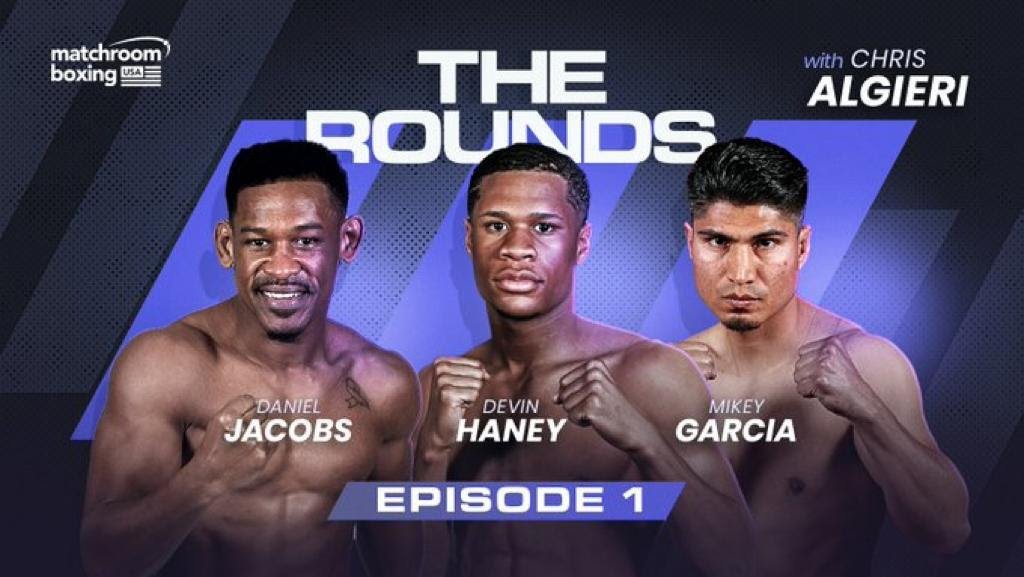 Mikey Garcia, Devin Haney, and Daniel Jacobs discussed the highs and lows of their careers in the first episode of a new Matchroom Boxing YouTube show called ‘The Rounds’ with former World champion Chris Algieri.

Each week, ‘The Rounds’ will feature Algieri and some of boxing’s best and brightest getting into deep dives on some of the specifics that make the Sweet Science tick, from making weight to fighting on the road, and from being an Olympian to facing retirement.

The first episode focuses on the hard times and setbacks that fighters have to endure along with the enormous highs that they experience. All three men have won World titles and reaped the rich rewards, but first, in the show, they revealed the struggles behind those successes.

Garcia on growing up in Oxnard, California.

“It was a very humble upbringing in Oxnard. My parents would come home after working in the strawberry fields for hours; my dad would go straight to the gym when he got home. I went to the gym as a kid to see my brother and others work out, but some people there didn’t make it.

“They got involved in the gang-related activity and went to jail or got shot and stabbed. But the gym was a safe place, everyone that came to the gym aspired to do something better, and most of the kids stayed on the right track because of boxing. Some of them didn’t make it in boxing, but they stayed off the streets because of the gym.”

Haney on missing out on the Olympics

“Then they changed the age rules, and I was in Colorado Springs when it happened, it was heartbreaking. It was always my dream to go to the Olympics and represent my country. Once I knew that it was impossible to go to the Olympics, we had to move forward; I said I was going to train and develop my pro-style and become a pro fighter. I was going to turn pro in Mexico at the age of 16, but people were telling me not to do it, that it was corrupt over there and that I might get a bad decision because, at the time, not many people were going over there to do that, but now it’s changed.

“So, we prepared a little longer, and when I was 17, that’s when I made my debut in Mexico.  It was crazy, I didn’t know what to expect, the whole crowd was against me, it was a bar, 600-700 people all against me and I had to fight, but I feel it developed me in the right way.”

“My Grandma was like my Mom, and it hurt so deeply. I lost her days before the Pirog fight. We were all around her hospital bed days before the fight, and I had to mentally wrap my head around it all as a young man. You need time to digest a loss like that, and I was trying to do it in her honor.

“I was trying to psyche myself up to perform under that pressure and with those emotions, it was very challenging, and that moment where I knew that things weren’t going to go well before I walked out of the locker room, I was zoned out, I was focused on the fight and ready to perform, but a subtle thought of my Grandma just had me crackling down, literally as I was walking.

I had to suck it up and go out there and fight the best way I knew how with the stress that I was under, being such a young man, I was immature at the time. I needed time to grieve the passing of my Grandma, and I learned the hard way, but in learning that, now I know that boxing is truly mostly a mental sport.

“As much as you go in there and you physically aim to knock the guy out, you have to be mentally prepared for battle, because you can go in there with a guy you know you can beat or challenge, but if you are not mentally equipped, the physical side we had 100 percent, we learned some valuable lessons for the future, and we moved on for the better.

I’ve learned so much from all three of my defeats. People take a lot of pride from having an ‘0,’ and there’s nothing wrong with that, but I think there’s something valuable from losing if you give it your all, you don’t quit, and it’s honorable.”