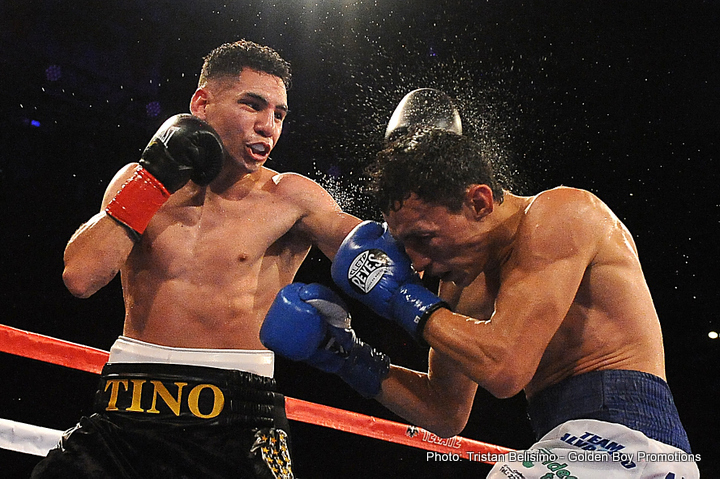 Avila was put to the test in facing the seasoned Rene “Gemelo” Alvarado in the featherweight division for the first time in his career. Avila initiated the action in the first few rounds as he aggressively came at Alvarado delivering quick combinations. However, by the fifth round, Avila changed tactics and began to box Alvarado, was able to keep his distance and land effective counter-punching. The active bout went all 10-rounds with scores of 97-93, 100-90 and 97-93 to give Avila the victory via unanimous decision.

“I felt that the fight went in different stages in which he would win or I would win,” said Manuel Avila of his victory. “I know I needed to work on my inside game and stick to the game plan. I’m excited to get back in the gym and hopefully 2016 will bring more action inside the ring for me.”

“I felt that this decision was fair,” said Rene Alvarado. “We are obviously in his house, but I felt that throughout the fight it was a very close match. I’m excited to go back to Nicaragua, and work on my technique. Hopefully, if given the opportunity I will come back and fight in Los Angeles.”

Mexican warrior Gilberto “El Flaco” Gonzalez (25-3, 21 KOs) of Mexico City returned to make his second showing at LA FIGHT CLUB in an eight-round super lightweight bout against Luis “El Vampiro” Arceo (28-14-4, 19 KOs) of Aguascalientes, Mexico. The televised co-main event to Manuel Avila vs. Rene Alvarado, was a complete bloodbath as both fighters fought with tenacity and tenor, making it the fight of the night as the crowds cheered on their favorite fighters. However that lasted until the fifth round in which Gonzalez began to break down Arceo with his impactful punches. By the sixth round, “El Flaco” landed subsequent body bunches, sending Arceo to the mat, and handing him a sixth round Technical Knock-Out.

“I knew I was of him the entire fight, however there were moments in which I felt like he had me,” said ahead Gilberto Gonzalez. “It’s my first fight of the year and I feel some ring rust, so my timing off at times. Fortunately, I was able to break free in those moments and was able to land the punches that gave me the victory. I am looking forward to this year and hopefully a world title will be in my midst soon.”

Opening the televised broadcast on Estrella TV, Columbian transplant Oscar Torres (8-1, 4 KOs), who is now fighting out of Los Angeles, faced on Marquis “Marvelous” Taylor (4-1) of Houston in a six-round welterweight fight. The even match-up proved to push each fighter to their limit, as they each exchanged powerful blows throughout the six rounds. Taylor performed for the crowd with his fancy footwork and landing punches while Torres fought back with unwavering power. After six-rounds of intense action, the judges scored the fight 58-56, 59-55, and 59-55 in favor of Marquis Taylor awarding him a victory by split decision.

“Honestly, this is one of my biggest wins. I am so thankful, and only God could have made this happen. After my loss in Vegas, I was willing to take any fight offered to me, knowing that even meant going into enemy territory. Torres was a tough fighter, and we fought to the nail. I hope that with this win, I will have more opportunities to come to LA and show the West Coast what I have to offer, and give them a performance to remember, even my little dances in the ring.”

“I am glad I was able to get in the ring and do what I came here to do, secure another victory,” said Edgar Valerio. “I am a hungry fighter who has high energy that translates well into the ring. My goal is to become a world champion and I am on my way.”

Also part of the live stream, Whittier, Calif. prospect Pablo “The Shark” Rubio Jr. (5-0, 3 KOs), who is represented by Los Angeles Laker’s player, Meta World Peace, took on Juan Carlos Benavides (5-8-1, 2 KOs) of Ciudad Obregon, Mexico in a scheduled four-round super bantamweight match-up. The match proved to be a bloody one, as the exciting brawl had both fighters launch their series of combinations neither relenting to the other. By the last round, both fighters were looking to finish each other off; however, “The Shark” was at an advantage as his body punches began to physically hurt Benavides. Judges scored the fight 39-37, 39-37 and 40-36 awarding Rubio a victory via split decision.

“Benavides was a tough guy, but I always train harder for these kinds of fights,” said Pablo Rubio. “I need to step in and make sure to use my distance and be braver to land them. I am excited to be partners with Meta World Peace and we are looking forward to growing together in the business of boxing.”

The second bout of the night featured Joshua “The Professor” Franco (5-0, 3 KOs) of San Antonio colliding with Riverside, Calif. native Jorge Perez (2-2, 1 KO) in a scheduled six-round bantamweight fight. Franco sent Perez to the mat early in the first round and continued to apply pressure as he secured a knockout victory in the second round via right hand uppercut.

“I think I’ve been able to retain my undefeated status because I’ve been sparring with amazing world champions,” said Joshua Franco. “I feel that the opportunity to receive a lot of their attention and skill has allowed me up to be an even better fighter and I’m looking forward to be built up even more.”

Opening up the night and Ring TV live stream, Tenochtitlan “T-Dog” Nava (1-0) of Los Angeles, the latest prospect to emerge from the venerable Westside Boxing Club team, made his professional debut in a four-round super featherweight event against Antonio Martinez (3-7, 3 KOs) of Durango, Mexico. Pleasing a rowdy crowd Nava applied pressure early on to Martinez, but Martinez fought back and quickly the fight fans were treated to a class brawl between two Mexica fighters that lasted all four rounds. The judges scored the fight, 40-36, 40-36, and 39-37 to give Nava his first professional victory via unanimous decision.

“I am so glad I started my professional debut with a victory by unanimous decision,” said Tenochtitlan Nava. “I know that being surrounded by great sparing partners like Nick Arce and Rafael Gramajo have helped me get stronger and prepare for this debut. I am ready for my future career in boxing and to the next fight this year.”