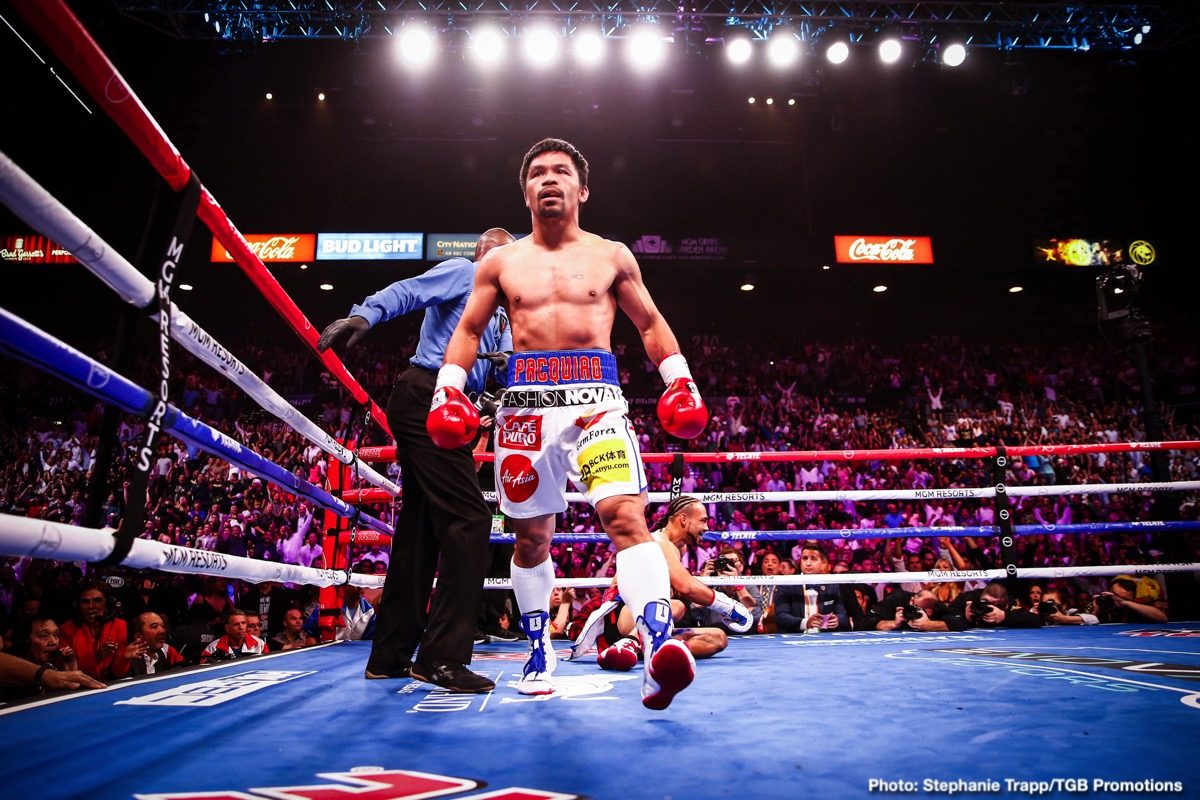 We are just two days into the brand new decade – the ’20’s, the 2020’s – and superstar Manny Pacquiao has made a massive piece of boxing history without having thrown a punch since July of last year. It was in July when the incredible Filipino southpaw dynamo won a close but fully deserved 12-round decision over an unbeaten Keith Thurman to become WBA welterweight champion.

Pacquiao is now the only fighter in boxing history to have ruled as a world champion in four seperate decades. This really is an astonishing accomplishment. It was way back in the 1990’s, in December of 1998, when Pacquiao won his first world title: the WBC flyweight crown by scoring a KO over Chatchai Sasakul. So that’s the ’90s covered. Manny was IBF super-bantamweight champ in the decade that was 2000 to 2009, also ruling in that decade as the WBC super-featherweight champ, the WBC lightweight champ and the WBO welterweight boss.

In the decade that was 2010 to 2019, Pac Man ruled as WBO welterweight champ and WBC super-welterweight champ, as well as WBA welterweight champ (secondary version). While here we are now, in the 2020s, and Pacquiao is the reigning WBA king at 147 pounds. Again, a truly amazing achievement, not to mention a sure sign of longevity, dedication, and immense passion for the sport.

So how much more can Pacquiao accomplish before he’s finally done boxing? Who knows, but plenty of fight fans are expecting to see Pac Man fight, and win, this year, maybe even next year. Now aged 41 and sporting a quite incredible 62-7-2(39) pro ledger, Manny has been a prizefighter for 25 long years (his pro debut coming on January 22nd of 1995).

When the time comes to fully and accurately write up the Manny Pacquiao story in the boxing history books, it will be written how Pac Man is in a unique and very special place all by himself.

Indeed, does Pacquiao deserve to be ranked somewhere in the top-10 greatest fighters of all-time? You could certainly make that argument.