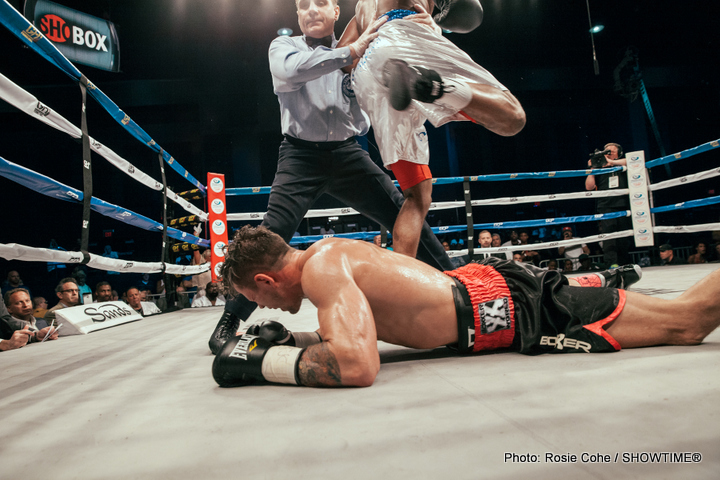 ShoBox: The New Generation celebrates its 14th anniversary with an action-packed card. Undefeated middleweight Antoine “Action” Douglas (18-0-1, 12 KOs) of Washington D.C. finished off Istvan “The Prince” Szili (18-1-2, 8 KOs) of Frekendorf, Switzerland with an impressive third round TKO in the main event of ShoBox: The New Generation, Friday, July 17 from Sands Casino Hotel in Bethlehem, Pa. The event was televised live on SHOWTIME.

Both Douglas and Szili, had strong starts. Douglas exploited his reach advantage and strong right, while Szili showcased a few good combinations. However, Douglas showed dominance throughout the round by outlanding Szili 18-to-one in jabs.

Szili tried to wear Douglas down, but the 22-year–old Washingtonian countered the Swiss’ attempts with great combinations and strong rights. Douglas knocked Szili down with a left hook and two big rights with less than 10 seconds to go in the second, but Szili pulled himself together to finish the round. “The Prince” never fully recovered and Douglas used his speed and powerful jabs to deliver two more knockouts causing the stoppage just 29 seconds into the third round.

“Tonight was a team effort and I’m really proud of us. I rely on my team to help me move forward and continue to be successful,” Douglas said. “I will return again to fight under the SHOWTIME banner soon.

“I worked him [Istvan Szili] off the jab and once I caught him a few times, I was able to give him the combinations. After that my power punches kicked in and you saw the result of that.”

Douglas is an active fighter, making this his fourth win in a row since his draw with Michel Soro in July 2014. For Szili, this was his first time fighting in 11 months.

“I wasn’t able to show what I was capable of doing. I had a great sparring camp and looked tremendous going up against world champions, so I’m not sure what happened,” Szili said. “Once I was hit in my ear, I lost my balance.

“Loses happen. Some of the best people have been beat before. Now I have to decide if I will come back or retire after this but I would love another chance to show what I can do.”

“This is the fourth time Antoine Douglas has fought on ShoBox, and I thought [Istvan] Szili would give him more trouble. I thought Szili would try to take him into the later rounds, but Douglas was much faster, much quicker on his feet. Szili made him look really good because Douglas was able to do whatever he wanted,” said Boxing Historian and SHOWTIME analyst Steve Farhood.”I’ve seen Douglas four times now, three wins and one draw and every time I take away the same thing: I want to see him again.” 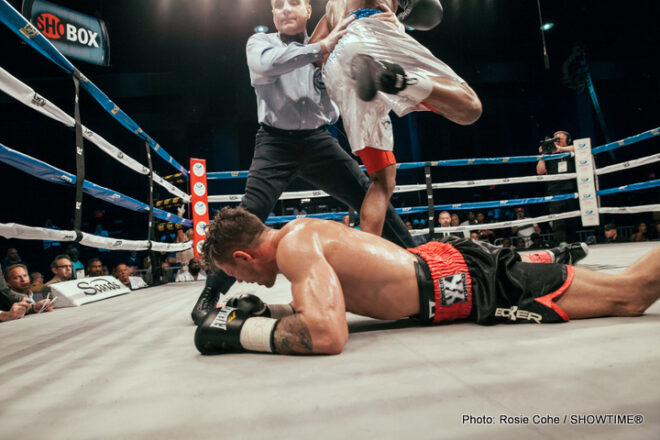 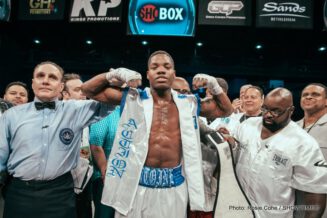 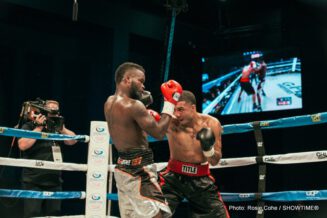 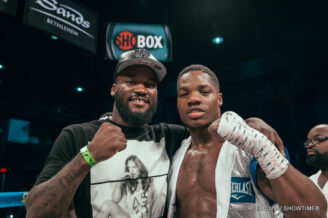 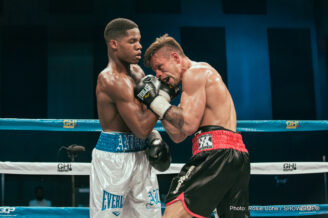 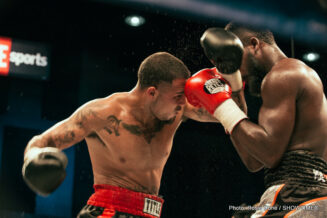 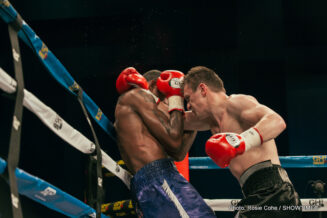 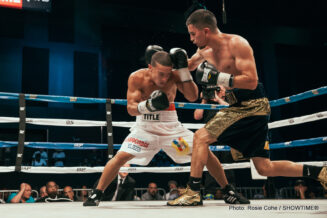 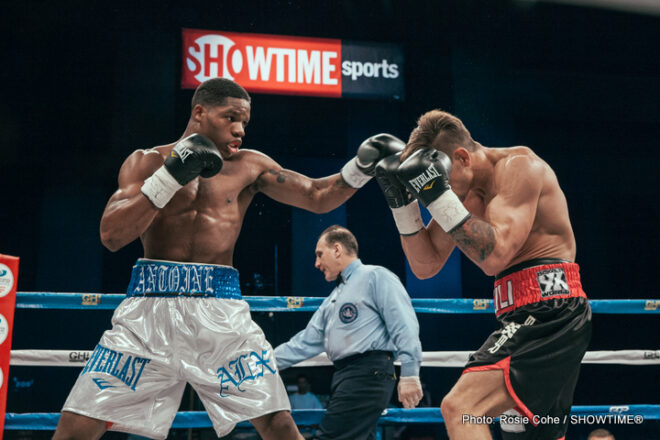 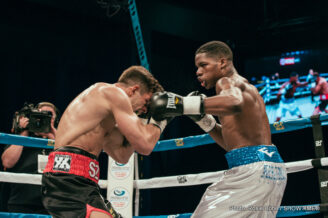 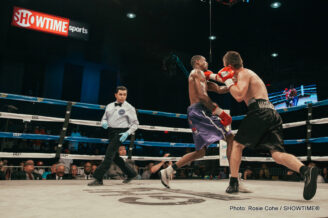 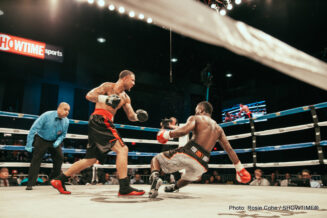 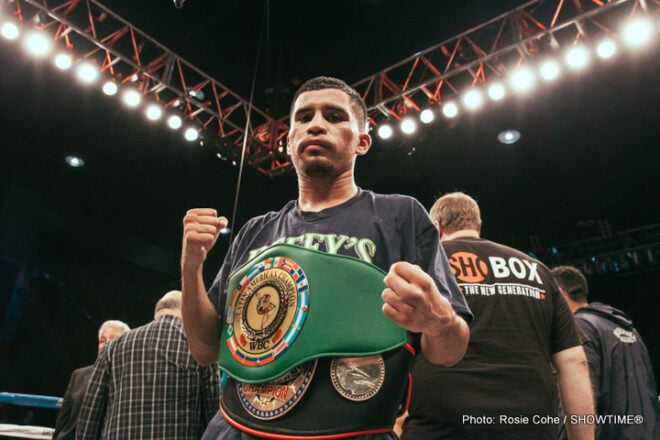 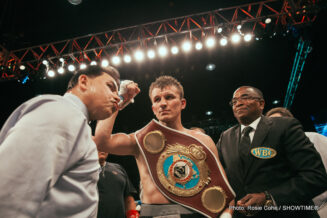 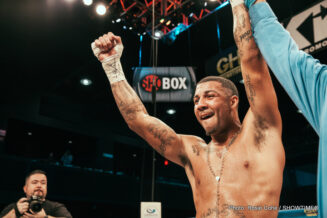 In the co-feature, Derrick “Take it to the Bank” Webster (19-1, 10 KOs) of Philadelphia, Pa. suffered his first loss against fellow unbeaten, 22-year-old Arif Magomedov (16-0, 9 KOs) of Glendale, Calif. by way of Russia in a one-sided 10-round middleweight matchup.

Magomedov impressed the crowd by outboxing the 33-year-old southpaw with poise and aggressiveness. He fought on the inside, pressuring Webster and dictating the pace of the fight. Webster struggled to adapt to his opponent’s style, but picked up the rhythm in round four only to be outboxed by Magomedov in the following rounds. Despite Webster being knocked down twice (seventh and tenth) the victory for the Russian wouldn’t come by way of knockout but by the judges’ scorecards. Magomedov won by unanimous decision 99-89, all three judges.

“I thought I would knock [Derrick] Webster out but I could tell he was prepared. Because of his height, I was surprised by how easy it was to get inside. In the end, I did what I was supposed to do. I did what we prepared to do in the gym – get inside. The ref did a good job of letting us fight on the inside.”

“Only time will tell where what’s in store for me next. I still have a lot of learning to do.”

“I was very prepared for the fight but due to my stomach virus and fractured ankle, I wasn’t 100 percent health wise. This was also my first time at 160 in about five or six years. No excuses, he [Magomedov] was the better man tonight. I’ll be right back in the gym on Monday.”

“[Arif] Magomedov is also 22, just like Douglas. He looked very good against [Derrick] Webster – a six foot four southpaw – a fighter that is not easy to look good against,” said Farhood. “Magomedov, relatively new to the American boxing landscape, is definitely one of the best young middleweights in the world.”

During his second appearance on ShoBox, Adam “Mantequilla” Lopez (13-0, 6 KOs) was victorious in his 10-round super bantamweight bout with Dominican Republic-native Eliezer “Campeoncito” Aquino (17-1-1, 11 KOs).

This may have been Aquino’s first fight in the United States, but he showed that he was a true competitor. Aquino chose a relentless approach by unloading punch after punch, while Lopez was able to strategize and take smarter shots. Typically, Lopez has been able to finish off his opponents in the sixth round, but tonight the two went the distance.

Aquino was relentless initially, hitting Lopez nonstop. It was clear that Lopez was frustrated, but he wouldn’t let Aquino dominate for long.

“I knew nothing about my opponent. Every round I had to learn a little bit about him. I got the drop early. I never thought that he was going to last the full ten rounds. I also thought I won by a bigger margin than that,” said Lopez. “He’s a good boxer and has a lot of power. He threw a few solid shots, but he didn’t really have a hook so I was basically trying to block his right hand.

“This is my first 10-round fight; a good learning experience. Before, I had only gone to six once. Aquino had a lot of energy and hit me with a lot of awkward shots. It wasn’t easy, but I weathered the storm.”

“This was a great learning experience for [Adam] Lopez going 10 rounds for the first time against an opponent that wouldn’t stop coming at him,” said Farhood. “He definitely won the fight, but the type of experience that he gets with the level of opposition at SHOWTIME, allows a fighter like Lopez to grow.”

Opening the ShoBox:The New Generation telecast, Samuel “The Main Event” Clarkson (15-3, 9 KOs) of Dallas, Texas delivered a huge upset by knocking down Jerry “The King’s Son” Odom (13-2, 1 NC, 12 KOs) of Washington, D.C. three times before the referee, Shawn Clark, stopped the fight at 1:15 of the third round.

The scheduled super middleweight 10-rounder started strong, with big lead rights and uppercuts from Odom and strong body shots and good connections from Clackson. Odom seemed to take the lead in the second, breaking Clarkson down, landing bigger shots and looking for an opportunity to put his power to good use, but Clarkson fought back and finished the round by knocking Odom down for the first time in his career with a right uppercut. In the third and final round, Clarkson led from the get go knocking Odom down twice more before the referee stopped the fight.

“This is a blessing, my team and I struggled a lot to get here. This win is really a blessing” said Clarkson. “We did what we had to do, we overcame the distractions and we won. I wasn’t supposed to win, but you can’t judge a book by its cover and a fighter by his record.

“I studied [Jerry] Odom in and out, and everything I expected, he did.

“We’ve been working on the uppercut for almost six weeks. I met a lot of great orthodox fighters before, and one thing that I noticed is that when a fighter comes with a right hand, the real bonus comes after with the right uppercuts. So, when I saw him [Jerry Odom] leaning in and his head wasn’t moving with his punches, I would just slip in and throw an uppercut and he was there on the canvas.

“In the world of boxing, sometimes you get caught. Tonight, I got caught,” Odom said. “I just want to thank all my supporters, this is just a small setback and I will be back.”

“[Samuel] Clarkson stole the show. I think he was the biggest underdog on the card coming in and he exposed [Jerry] Odom,” said Farhood. “Odom was the bigger puncher; Clarkson was the one with the suspect chin. Turned out to be exactly the opposite, a good example of the fact, ‘You never know in boxing.’”