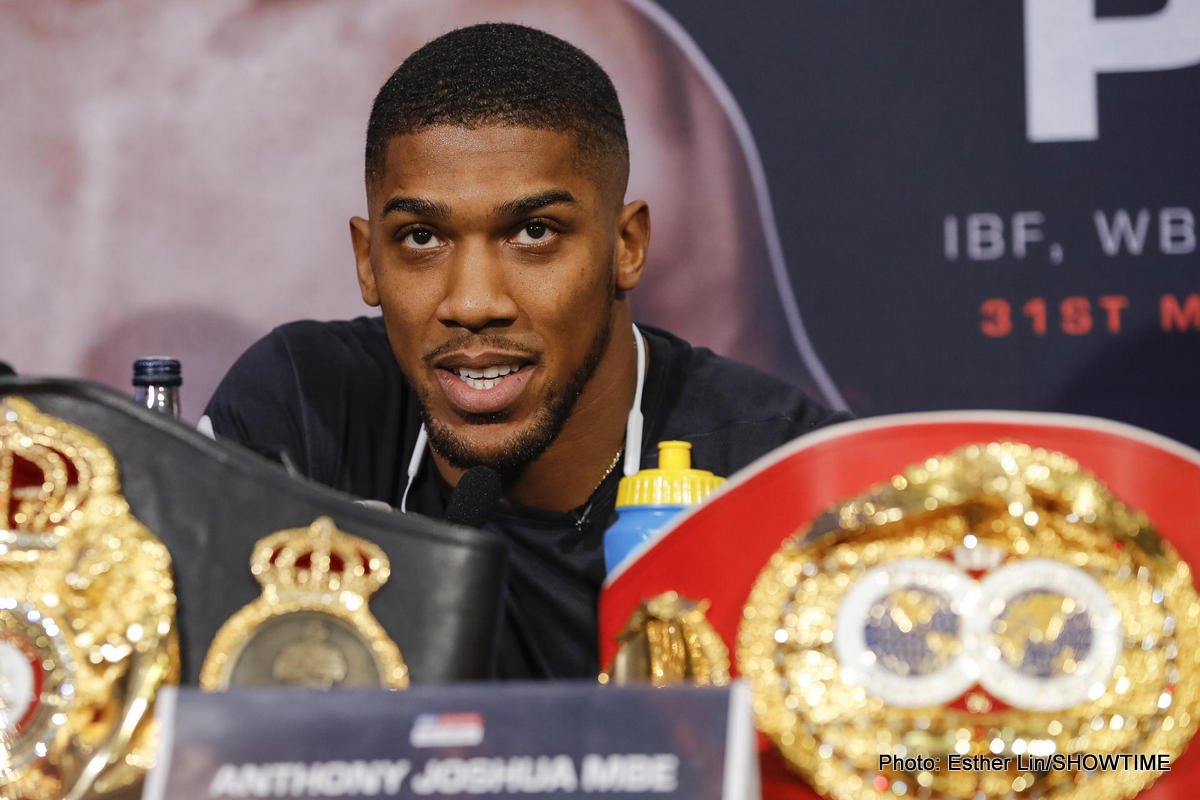 This one can be filed under the opportunistic column. Heavyweight champ Anthony Joshua received an attempted delivery note at his home yesterday and the WBA/IBF/WBO ruler called up the delivery firm so as to locate his package. It turns out the guy on the other end of the phone, clearly a boxing fan, twigged who he was speaking with and recorded his brief chat with the British superstar – and then put it up on You Tube.

Cheeky, yes. Opportunistic, yes. But what was said in the conversation? Well, Joshua – clearly a nice guy who could so easily have ended his call with a few words instead of chatting with the delivery firm employee who was getting himself an exclusive – spoke about how it will almost certainly be to the U.S for his next fight, that any chance of an April 13th bout at Wembley is now pretty much dead.

“I think we’re going to have to go to the States because I’ve done everything I can and everyone doesn’t want to fight, man. I think it’s about June time. I doubt [it will be Wembley now]. The only thing I can think is if they’re trying to make me stop training and then two weeks out they’ll say ‘Yeah, we wanna fight’ and I’m two weeks out of preparation. They might try and catch me dry. Other than that, in my mind we’re going to the States. It will be good though.”

READ:  Abel Sanchez Wants To See Gassiev Get Shot At Revenge Against Usyk At Heavyweight
https://www.youtube.com/watch?v=_T6pKVpwmBg

It will almost certainly be Jarrell “Big Baby” Miller for Joshua if he does have his U.S debut next – and it sure is looking like he will be.

Promoter Eddie Hearn had a little chuckle at the nerve of the delivery guy who secretly recorded his chat with AJ.

“So, AJ had a delivery last night. They left a note saying they tried to deliver it, bla, bla, “Hearn told IFL TV. “AJ gets home, phones up delivery guy and the delivery guy realises it’s Anthony Joshua and starts talking to him and he records the call and puts it straight out on You Tube. The first thing I thought was it actually shows what a decent geezer AJ is. You’ve got the world heavyweight champion talking to this delivery guy who is recording the call. In fact he [Joshua] kept talking to him a bit too much. In fact I spoke to AJ last night ‘mate, you wanted to carry on the conversation!’ I think the delivery people should get a little call and say ‘look, this ain’t really on, is it.’”

Perhaps the delivery guy, whoever he is, should be commended for getting more out of Joshua than a number of boxing people have been able to get out of him regarding his next fight.

More and more, it’s looking as though Joshua will be bound for the U.S for his next fight. Now, will the guy who surreptitiously recorded Joshua get punished? Should he? It’s a new one, this one is.

READ:  Anthony Joshua: I got beat. I was shook against Andy Ruiz
https://www.youtube.com/watch?v=bu1VvCR1m4k
Follow @eastsideboxing