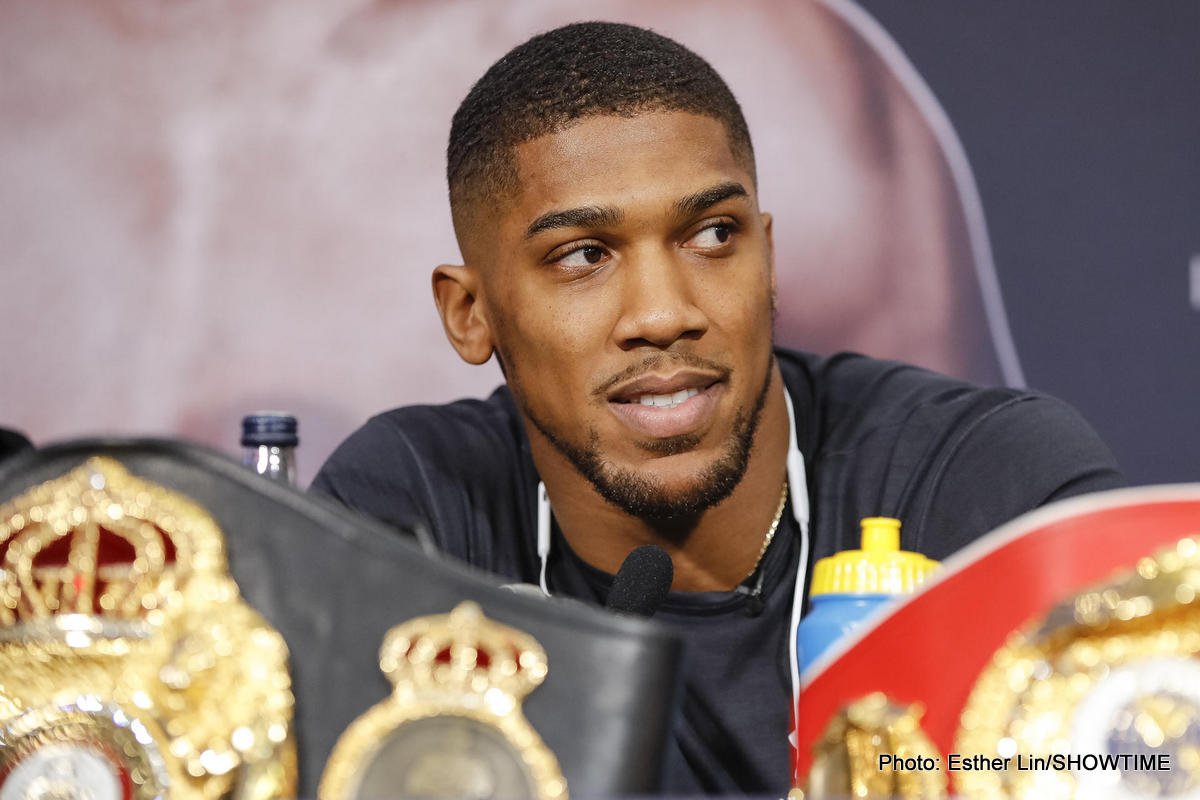 Has Jarrell Miller succeeded in placing himself firmly underneath the skin of heavyweight champ Anthony Joshua? Maybe. The usually calm and collected AJ sure let loose with a barrage of his own verbal abuse yesterday at the official presser to further hype the June 1 fight at “MSG” as AJ, who seems to love speaking in initials, refers to Madison Square Garden.

Vowing to “knock him the f**k out” was the least of Joshua’s talk; the WBA/IBF/WBO/IBO ruler also stated that he cannot respect Miller as he, “Big Baby,” is a man who tested positive for performance enhancing drugs (you know, initialled as PEDs). It is assumed Joshua was referring to the time, way back when, when an unknown Miller, then plying his trade, or trying to, as a kickboxer, came up positive for something nasty in California.

Speaking with the media yesterday a short time after the official table-top presser, AJ was captured by Fight Hub TV. Here is what the unbeaten champ had to say:

“He’s slow,” AJ said of Miller. “He’s not a puncher. Like a Gorilla back. Ex-kickboxer. Probably be better off in the NFL. Substance abuse — got caught on PEDs. I can’t really respect that so talk is cheap and I’m just gonna back it up in the ring so I really don’t have much to say. But with me, right, I think like stats and facts don’t lie. Records have been broken here, in MSG, what we’re doing. My stats don’t lie when you compare records. So it’s just jealousy, man. It’s just hate for no reason. I respect my opponents but if they disrespect me they get the worst of me as well, so it’s just negativity and hate. [His stamina] is not that good, he gasses out. Like, what’s this about his stamina?! I don’t really rate his stamina. Any fighter gets tired when he gets hit and he gets hit a lot, so it doesn’t matter how good your stamina is. If I keep punching his jaw, his body, he’ll soon fade. So he’ll soon find out what it’s like. Look, the best chance he has is to land a big right hand or left hook, but that’s not really gonna happen so he’s gonna get beat. It’s [loading up on a big shot] what they resort to in sparring, when I spar, in fights sometimes. It’s the fight or flight instinct, so it’s [a case of] giving it that one shot before I blow a gasket and I don’t have anything left to give.”

Agree or disagree with AJ? Often, any fighter, no matter who he is, is risking having his words coming back to haunt him in a big way when he says his opponent cannot punch. Is Joshua making such a mistake? And is Miller really “slow?”

It’s entirely possible Joshua has left himself open to the ultimate sucker-punch. Now it’s up to Miller to capitalise. If he can.