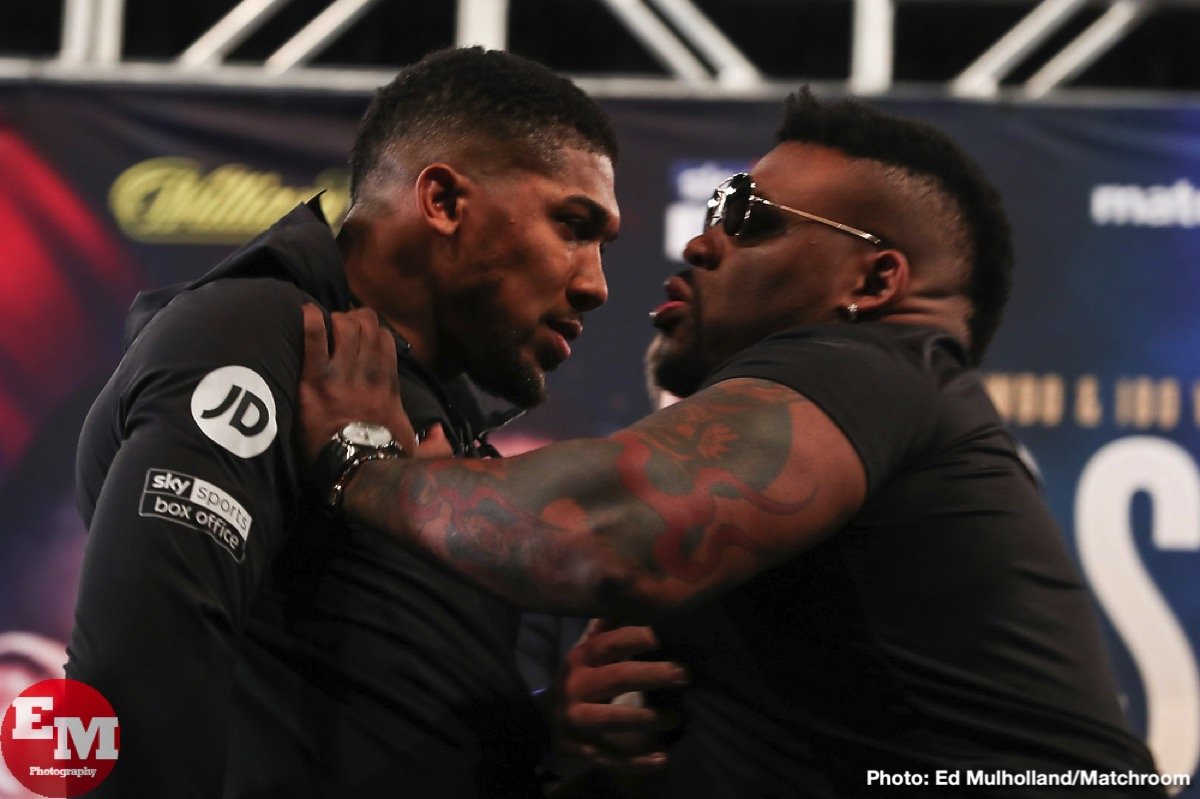 As fans probably know, things got pretty tense at yesterday’s presser for the June 1st Anthony Joshua/Jarrell Miller clash in New York. Some of the highlights being: the “shove,” Miller putting his hands on the WBA/IBF/WBO heavyweight champ and sending him flying, Miller calling Joshua “an Uncle Tom,” and the usually reserved AJ vowing to knock Miller “the f**k out!”

It was interesting to say the least. But what of the actual fight? Miller is, as we all know, a great talker, and maybe he did do what he wanted to do and got deep under Joshua’s skin, but will this aid “Big Baby” when fight time comes or will it prove to be his undoing? We’ve never really seen AJ fight angry – Dillian Whyte came the closest to seriously rattling Joshua but Whyte was ultimately made to pay for it – but it’s possible the normally mild-mannered champ will be looking to punish Miller for his bold and insulting words.

Then again, if he does fight under a cloud of rage, AJ may tighten up, try too hard to send Miller into oblivion and get tired and arm-weary as a result. For his part, Joshua says he will “target Miller’s large body” and he will win by KO “in four-rounds.” We will see.

Joshua, enjoying the media attention he is getting in the U.S ahead of his very first fight there, told The New York Times that, come June 2nd, Miller will be “irrelevant” and that he himself will be moving on to other big fights.

“June 2 he’ll be irrelevant. So he’s relevant for the next 14 weeks. And then when it’s all done, I’ll be moving on to looking at Wilder, Fury or Luis Ortiz,” Joshua said. “I don’t see why we don’t see it (Joshua against Wilder) now. The ball is in his court. When he’s done freezing me out, he knows where to find me.”

Interesting stuff. Is AJ eyeing a fight with Cuban danger-man Ortiz if a fight between himself and either Fury or Wilder cannot be made? Fans would likely buy that fight, for sure. And as for Wilder “freezing Joshua out,” didn’t AJ himself say a few months back how he might freeze Wilder out? How things have changed. Just who is the top dog of the heavyweight division right now?

But as for how he would fight Wilder and Fury, Joshua had more interesting things to say:

“Fury, I’m just going to knock him out,” AJ told The NY Times. “No nonsense, none of this jab-for-jab nonsense. Just work him, work him, work him. With Wilder, I can outbox Wilder. No problem. Fury’s a bit more elusive, so I have to just kind of pin him down a bit more, then do what I want to do.”

First Joshua has to do what he needs to do against the approx 315 pound Miller. And in the upcoming fight, AJ won’t have to go looking for his man.