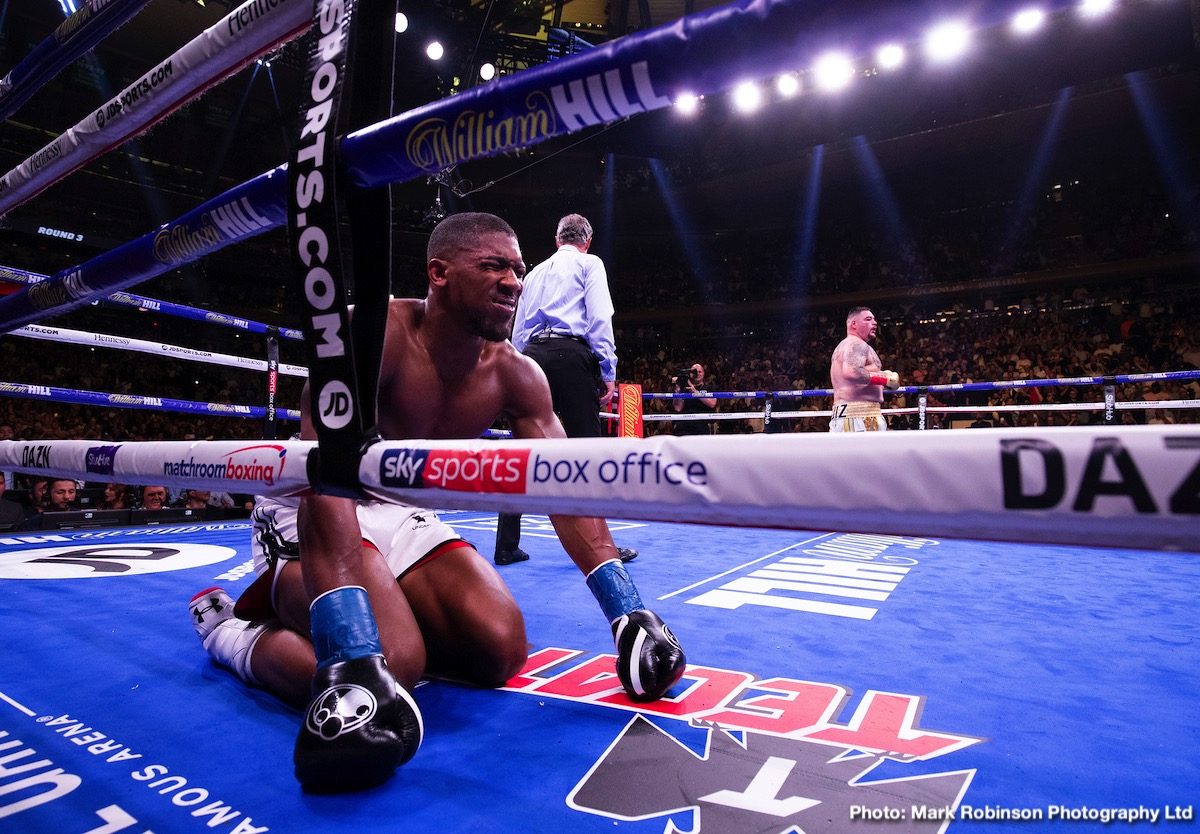 IBF/WBA/WBO heavyweight champion Andy Ruiz Jr. recommends that Anthony Joshua take a break from boxing to recoup mentally if/when he loses their rematch in two months from now on December 7 in Saudi Arabia. Ruiz (33-1, 22 KOs) says Joshua will have only lost twice in his career, and he would still be a top level guy.

Joshua (22-1, 21 KOs) saw his world come crashing down around him last June when last minute replacement opponent Ruiz trotted into Madison Square Garden in New York, and dropped him 4 times in the process of stopping him in the 7th round. AJ was supposed to fight 300+ lb. American heavyweight Jarrell Miller, but he was ruled out for the fight after testing positive for banned substances.

Joshua’s promoter Eddie Hearn found American Andy Ruiz from the bottom of the rankings, and he felt it was a nice safe pick. As it turns out, it was a blundering mistake on Hearn’s part, as Ruiz dominated Joshua from start to finish.

“I think he should take a little break if I beat him,” Ruiz Jr. said to skysports.com. “Let him recuperate, but one or two losses are not going to make a difference. He’s still a warrior, he’s still a great fighter, and I’m sure he’ll bounce back. He was the greatest heavyweight champion of the world. He had all the belts and now I do, so it’s a big blessing to be in this position.”

Taking a break might not be the answer to Joshua’s problems. If he loses the second fight to Ruiz, he’s going to need Hearn to start matching him carefully, like he was doing before. The smart thing would have been for Joshua not to take the rematch with Ruiz in the first place.

Joshua wouldn’t need to take a break if he avoided Ruiz like the plague, and went back to fighting guys like Alexander Povetkin, Dominic Breazeale, Joseph Parker and Carlos Takam. Joshua can beat those guys with no problems.

Hearn: Joshua’s loss might have been a freak thing

“Maybe it was a freak result for Ruiz,” said Hearn to Fighthype in talking about Joshua’ loss to Ruiz last June. “Maybe Ruiz has got Joshua’s number. “The truth is it’s the biggest fight of the year, and there are so many questions that will be answered in that fight. And I can’t wait. I’m nervous, and I’m excited.

“This is what we live for. Imagine how excited you’ll be when the first bell sounds for Joshua-Ruiz. We’ll all be petrified, and that’s what you want as a fan. I think so,” said Hearn when asked if Joshua will come back to the United States if he beats Ruiz in the rematch.

There was nothing freak about Joshua’ loss to Ruiz on June 1. That was a clear cut defeat against a fighter with better skills, and a superior boxing brain. By now Hearn should realize that Joshua was in over his head against the type of fighter that was out of his league. It’s like Joe Frazier meeting his match against a young George Foreman. Frazier could have fought Foreman 100 times, and he would always lose to that guy, because he lacked the fighting style to beat him.

Joshua is in the exact same situation in going up against Ruiz. The thing is, AJ can’t walk away from the defeat without at least trying to avenge the loss. If Joshua were to steer around Ruiz for the remainder of his career, he would be forever haunted by him. Joshua’s boxing fans and critics would never let him forget about his loss.

Maybe they don’t become important. I said a throwaway line to the UK press. Maybe he retires after this fight, because he’s had to deal with a lot since his loss. Maybe those supporters shrink a little bit. That’s what happens in boxing,” said Hearn.

The fan base for Joshua is definitely going to shrink if he loses the rematch with Ruiz on December 7th. That’s a given. As long as Joshua’s self-worth isn’t wrapped around him needing to be perceived as the #1 heavyweight division, he’ll be fine. There’s nothing wrong with Joshua being viewed as the #3 or #4 in the sport.

Hearn: Joshua has GOT to win the rematch

When you’re winning everyone is coming up and patting you on the shoulder, but when lose suddenly it becomes a little bit like a lonely sport. So he’s found out a lot about himself and with life with through this defeat. That’s how you come back, and that’s a true test of a man of character.

“The sport needs great fights. If Joshua were to lose, he’s had 24 fights, and he’s lost to one man. He’s unified the heavyweight division twice. He still has a future, but it’s all down to the individual. But he knows he’s got to win the fight. He wants to win the fight [against Ruiz] so badly, and he’ll be doing everything he can to make that happen,” said Hearn.

It’s important for Hearn that Joshua win the rematch with Ruiz, because he’s his #1 money maker, and there’s no one to replace him right now. Hearn has got a HUGE stable of fighters with his Matchroom Boxing promotion, but none of them is capable of bringing in the huge wads of cash the way AJ can. If Joshua loses the rematch with Ruiz, look for Hearn to pull him back to facing fringe level guys that he’s been matching him against over the years.

Walking with vision is important, however, to walk with faith is a blessing 🤲🏾 @mikeypoulli pic.twitter.com/AORaJA99zI