Andrey Fedosov threw himself right into the middle of the heavyweight mix with an explosive opening round destruction of undefeated former amateur star Mahammadrasul Majidov at the Seminole Hard Rock Hotel and Casino in Hollywood, Florida.

Fedosov landed a booming right hand that sent Majidov crashing down on his back to the point where is right lehg buckled underneath him. Clearly hurt, Majidov slowly got to his feet, but ate another flush right that sent him down again and the fight was over just 84 seconds after it began. 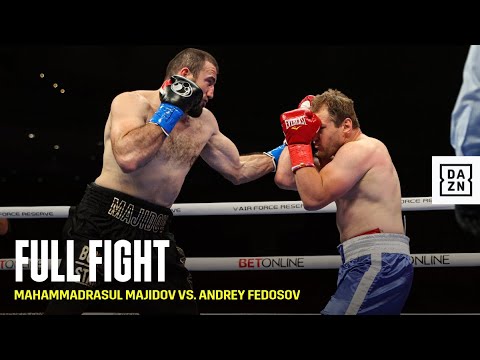 “It was good to come back after my layoff. They had me as an underdog, but I had to make a statement. I wanted to put the heavyweight division on notice that I am still a player, and ready for anyone,” said Fedosov

“He came out as a big amateur. They spent a long time, like five minutes just announcing his accolades. He was an amateur going against a professional I showed that he is not ready for the big dogs.”

“The first-time that I dropped him, I knew he was hurt. He took his time getting up. He got up at nine. My coach told me to go after him. I did, and you saw what happened.”

“We are very proud of Andrey. He did a great job in there. We knew it was the right fight for him. Justin Fortune did a great job getting him ready. Andrey is ready to fight anybody in the heavyweight division,” said Artie Pelullo, President of Banner Promotions.

Fedosov is promoted by Banner Promotions and Newsboy Boxing.

Former Boxcino Heavyweight champion, and, current contender, Andrey Fedosov weighed in for his bout against Mahammadrasul Majidov that takes place tomorrow at The Seminole Hard Rock Hotel and Casino in Hollywood, Florida.

Fedosov of Shuya, Russia, will be making his first ring appearance of 2021, and has a record of 31-3 with 25 knockouts.

The former Boxcino champion, who began his career in his native country, has been very successful when taking his career stateside, as he has a record of 12-2 with 11 knockouts, which includes scoring three knockout victories to win the Boxcino Heavyweight title

Fedosov, who is promoted by Banner Promotions and Newsboy Boxing, is a former WBO Intercontinental and WBA Fedlatin Heavyweight champion.

Majidov is 3-0 with three and knockouts, and is a three-time world amateur champion.