Andre Ward has a lot of respect for welterweight champions Errol Spence Jr & Terence Crawford, and he doesn’t want to give tips to either one of them for their November 19h fight in Las Vegas.

Ward is especially impressed with the workout videos of IBF, WBA & WBC welterweight champion Spence (28-0, 22 KOs). He feels that Spence’s body looks like he’s in great shape and is a man on a mission.

WBO 147-lb champion Crawford (38-0, 29 KOs) is taking a big step up from the opposition that he’s been facing when he was with Top Rank.

“I know he’s going to be ready. I expected more out of Ugas, but I don’t think that’s a knock on Usyk. It’s just Errol. He was just that great that night.

“It’s remarkable that the young man has a tremendous story. I hope he writes a book one day. I know the story is still being written, but some of the things that he’s overcome outside of the ring is phenomenal.

“Is goal was always undisputed, and here he is. My other brother in the sport is Terence Crawford. It looks like it’s going to happen. This is what we need in boxing and what both fighters need for their legacy.

“Both of them have had good careers, but this takes them to a different stratosphere the winner of that fight. I don’t get involved in politics, and when I say politics, I mean the boxing beef.

“The back and forth, I don’t touch that. I stay out of the way, and I stay in my lane. I talk to Errol about Errol when I talk.

“I stay out of the politics, but I love them both and hope they win the fight. Bar a draw, that’s not going to happen. Even a draw, you didn’t win. I wish they both could win the fight, but that’s not possible. I just appreciate how these young men carry themselves and went about their business,” said Ward. 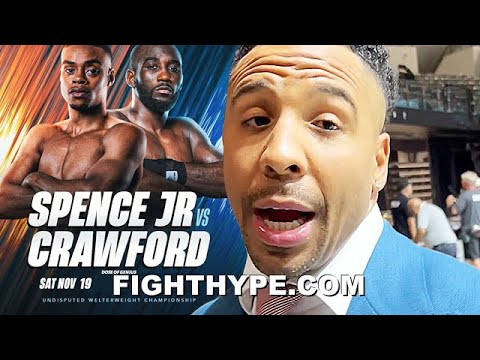