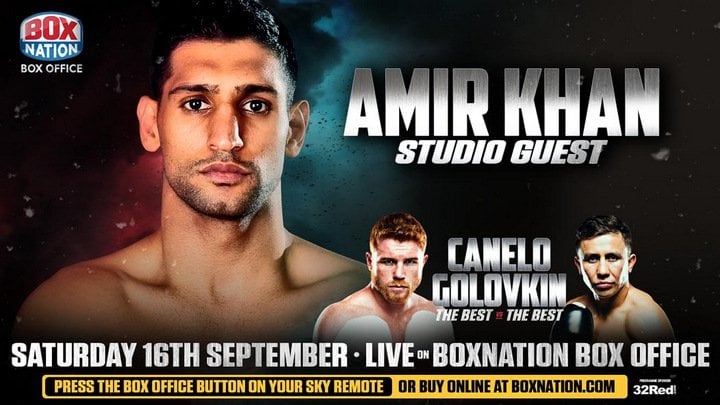 Boxing ace Amir Khan will be a BoxNation studio guest for the epic encounter between middleweight kingpins Canelo Alvarez and Gennady Golovkin.

The pair meet at the T-Mobile Arena next Saturday night in a genuine ‘Fight of the Decade’ showdown between the two hottest 160-pounders in the world.

Kazakh knockout king Golovkin puts his WBC, WBA and IBF belts all on the line against two-division world champion Alvarez, who is regarded as boxing’s next pay-per-view superstar.

30-year-old Khan, who bravely moved up two-weight divisions to take on feared Mexican Canelo in his last fight, will be on the BoxNation couch to give a detailed insight into how the mouth-watering clash is likely to play out.

The former unified light-welterweight world champion believes those tuning in on BoxNation Box Office for a one-off fee of £16.95/€21.95, or watching live as subscribers to BoxNation, are going to be in for something unforgettable.

“This is going to be a very special fight,” said Khan. “It’s one which I’m really looking forward to watching because fans have been asking to see this for a long time. These are the two best middleweights in the world taking on each other. It’s the way that boxing should be – the best fighting the best.”

Khan believes that the flame-haired Canelo will come out victorious on the night following a string of impressive performances.

“Going on their past few performances I think that Canelo is only getting better and will get the win. Golovkin is an excellent fighter but his last performance against Danny Jacobs would have given Canelo a lot of encouragement,” said Khan.

“Golovkin had trouble dealing with Jacobs and Canelo has even more skills. I’ve been in the ring with him and he’s quick, has good movement and is a big puncher. I know a lot of people think Golovkin is the puncher going into this fight but Canelo’s power should not be underestimated.

“As hard as they both hit I think Canelo will take the fight on points. He is an excellent counter-puncher and likes fighters coming to him, something which Golovkin does.

“Golovkin tends to walk down fighters he is physically stronger than but he won’t have it all his own way against Canelo because he is just as imposing and won’t be bullied,” said Khan.

The Olympic silver medalist thinks the fight has the makings of an all-time classic, following in the footsteps of some of boxing’s memorable middleweight clashes.

“This fight does remind me of the great fights of the past when the middleweight division was thriving. Everyone remembers the era of Tommy Hearns, Marvin Hagler, Sugar Ray Leonard and Roberto Duran when they all fought each other. Even today we still talk about it. This fight has the potential to be a modern classic and I do think it will live up to the hype.”

BoxNation Box Office will bring UK and Irish fans the fight live on Sky and Virgin for just £16.95/€21.95 via their remote control, or subscribers to BoxNation will be able to get the fight as part of their monthly subscription.

32 Red, part of the Kindred Group, are delighted to announce an exclusive deal to sponsor BoxNation’s coverage of the most eagerly-anticipated fight in generations between two-division World Champion Canelo Alvarez and WBC, WBA and IBF Middleweight World Champion Gennady “GGG” Golovkin.

The pair are set for a colossal clash next Saturday night at the T-Mobile Arena in Las Vegas, in a fight that has fans across the world captivated.

Earlier this week, the ‘Channel of Champions’ announced details of how UK fans can watch the biggest fight in boxing.

BoxNation’s current paying subscribers, and any new customers that wish to subscribe instead of buying it via BOX OFFICE, will get the fight as part of their monthly subscription.

Fight fans will be able to purchase the colossal collision exclusively on BoxNation Box Office from just £16.95.

The only way to buy Canelo v Golovkin on Sky is via the Sky remote control and will be available to purchase from Saturday 9th September.

Virgin Media customers can order the event too via their remote control from Monday 11th September.

If you are not a Sky or Virgin Media customer you can buy this fight as part of a monthly subscription to the channel through boxnation.com.

Gerry Murray, Director of Brand & Acquisition, 32Red PLC, commented: “Canelo v Golovkin is the fight real fans have all been waiting for and we’re delighted that 32Red are involved in bringing U.K. viewers such an exciting matchup alongside BoxNation. We’ve developed an excellent relationship with Frank Warren and his team in recent months and combined with the outstanding card from the Copper Box, headlined by Saunders v Monroe Jr, September 16th promises to be one of the great nights of boxing.”

Frank Warren, BoxNation Chairman, commented: “This is the ‘Fight of the Decade’, and we are delighted to be working alongside our fantastic sponsor 32Red. This is a fight that will undoubtedly go down alongside the legendary middleweight bouts of the past. It has been a brilliant start to our partnership with 32Red and I am looking forward to putting on more world class events with them.”