The long and distinguished reign of Joe Louis (a man both Rocky and Jersey Joe faced in also memorable fights) had come to an end, and it was time for a new heavyweight star. It turned out, after a savage encounter, that “The Rock” was this new star.

Walcott, at age 38 – this a seriously advanced age for any fighter 70 years ago – had made history in July of 1951, when he landed one of the sweetest left hands ever captured on film to flatten the superb Ezzard Charles, the knockout seeing him become the oldest world heavyweight champion ever. The win saw the man born Arnold Cream rise to the top at the fifth attempt, his 7th round KO of Ezz seeing him finally win the big one.

Walcott made just one retention, this a points win over Charles in what was their fourth tango. Then, having carved out a 49-18-1 ledger, with many of these wins and losses coming against genuine killers – Elmer “Violent” Ray, Curtis Sheppard, Jimmy Bivins, Joey Maxim, Harold Johnson, amongst others – Walcott signed on to defend against a 29 year old, 42-0 Rocky Marciano, born Rocco Francis Marchegiano.

Walcott, after all he had accomplished, and perhaps due to the blood, sweat and tears it had taken him to climb the mountain, was offended by the very idea of Marciano being able to beat him and take his title.

“Write it down,” an angry Walcott ordered the media at a gathering that took place prior to the big fight set for Philadelphia. “He can’t fight. If I don’t lick him, take my name out of the record books.”

Well, Walcott’s fine name was never erased from the history books, and rightfully so, yet Rocky made Jersey Joe eat his words. That and a crunching, bone-smashing right hand to the head.

For the better part of 12 rounds, Walcott was beating Marciano; he was beating him to the punch, and he was beating his challenger in terms of the score cards. Walcott, sharp and deadly early, dropped Marciano in the opening round, this with a crisp left hook to the jaw. Rocky bounced up from his career-first knockdown quickly, yet he was clearly dazed and hurt. Old man Walcott was backing up his bold words.

Marciano took a ton of leather in the fight, and it wasn’t until the 4th that the challenger began to get something of a foothold in the fight. Marciano’s physical strength is today the stuff of legend, and the legend was born in this fight. Marciano began to bull Walcott back, his raw determination seeing him get home with some punches. Round six was super-violent, and both men ended the session bleeding. Warring as though in a phone-booth, the two men clashed heads, with Walcott left with a cut over his left eye, Marciano with a gash on his forehead.

Walcott poured it on in round 7, while through rounds 8 to 11, Walcott both boxed, firing out his jab, and slugged with Rocky, severely testing Marciano’s soon to be legendary chin. Walcott also inflicted additional bloody damage to his “crude” challenger’s face, Rocky’s left eye especially. It was almost all Walcott, and if the fight had taken place today Marciano would have gone down heavily on points, losing the battle. But then, in the unlucky round of 13, it happened.

Marciano, busted up but still snarling and fighting out of a crouch, backed the champion up. Rocky then showed Walcott his left hand, before he beat Walcott to the punch as the pair simultaneously threw hefty rights. Marciano was a hair quicker than Walcott, his bomb of a right hand – his “Suzy Q” – landing flush and instantly putting out Walcott’s lights. The soon to be ex-champ slid to the canvas, his left arm draped over the bottom rope. Marciano landed a needless left hand to the head before retreating to a neutral corner, certain his night’s work was done.

Indeed, the ref’s count was not needed. There was a new heavyweight king. Marciano had turned it around in stunning fashion. Walcott never even saw the punch coming. We fans, however, have never stopped watching the KO, and this epic fight in full, ever since. 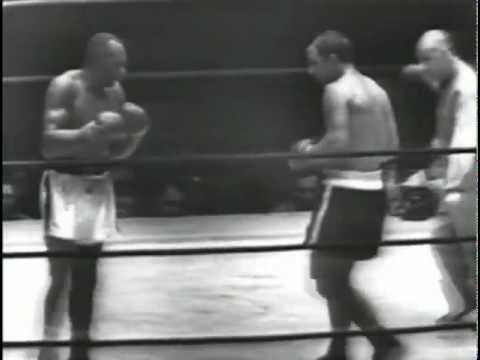