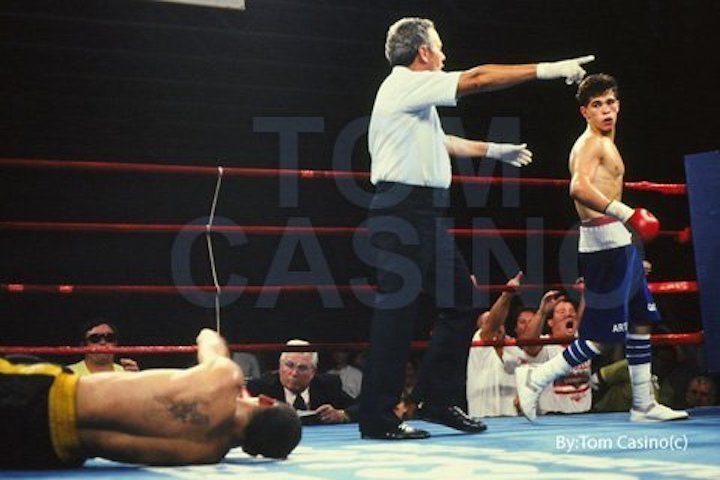 A quarter of a century ago, the boxing world was first introduced to a fighter who would in time become THE most consistently thrilling, blood and guts, never say die warrior of them all. 23 year old Arturo Gatti, a fresh-faced up-and-comer, challenged Tracy Harris Patterson for the IBF 130 pound championship. The fight took place at Madison Square Garden in New York, the fight the chief support to established superstar Oscar De La Hoya’s fight with Jessie James Leija. Together, Gatti and Patterson stole the show. The underdog going in, Gatti was not the talking point going into the fight. Patterson, a two-time champ, was the adopted son of heavyweight legend Floyd Patterson and his story proved an interesting and inspirational one. Fans learned how a young Patterson was too shy to ask Floyd to train him, instead silently hanging around the gym day in and day out. Eventually, the former two-time heavyweight king approached Tracy and the two hit it off big time.

And Patterson was a fine fighter. A smooth boxer with plenty of heart and desire, Patterson had made Floyd proud. But against Gatti, Patterson met a man with simply incredible fighting heart and desire. Also, Gatti had fine boxing skills himself – at this stage in his career, “Thunder” was not yet the almost unbelievably courageous ring warrior he would become. This isn’t to say the Gatti-Patterson fight was not exciting. It was. But Gatti boxed smartly, patiently, using his swift left jab and paying full attention to his corner at all times. Both men tested the other hard, with the boxing match erupting into a slugfest at times, especially in the later rounds. Gatti scored a flash knockdown in the second round, but by the fifth Gatti’s right eye was swelling up (this proving to be a familiar sight in future Gatti fights), and in the tenth he suffered a cut to his left eye (Gatti shedding plenty of blood throughout his amazing career).

Patterson had fallen behind on points and he knew it. The final few rounds were thrilling as the two men traded. Patterson was looking for a KO to save his title. Gatti was going nowhere. Patterson poured it on in the final round, rocking Gatti. But the challenger sucked it up and he held on. Gatti had won his first world title by way of a unanimous decision that was close on two cards. The fight was good enough for a rematch to be staged, with Gatti repeating his points win. The two Gatti-Patterson fights, though not reaching the epic heights Gatti’s wars with Micky Ward, Ivan Robinson, Gabriel Ruelas and Wilson Rodriguez did, were brilliant duels. Gatti was on his way, he would soon become the new lower-weight boxing star, while in time his fame would reach simply legendary proportions.

Patterson, born on Boxing Day in 1964, was almost 31 years of age when he first fought Gatti, and though he had plenty left to offer he never again ruled as champion. Patterson retired in 2001, with a fine 63-8-2(43) record. He was stopped just once, this by Gregorio Vargas in 1998. Gatti of course died far too prematurely (and under mysterious circumstances) in July of 2009, aged just 37. We fight fans will never, ever forget him.