Unbeaten four-belt light welterweight champion Josh Taylor was disgusted at watching Teofimo Lopez get in the spotlight to try and pass himself off as an undisputed 135-lb champion alongside Canelo Alvarez after he became the undisputed 168-lb champion last Saturday night after beating Caleb Plant.

Taylor saw Teofimo as trying to fool the public into thinking he’s an undisputed champion when in reality, he holds 3 titles and the Franchise belt, which is an honorary strap the WBC created a couple of years ago.

For Teofimo to become the undisputed lightweight champion, he would need to beat WBC champion Devin Haney. Those two could potentially fight in 2022.

If it does happen and Teofimo wins the fight, he’ll only briefly be the undisputed champion because he’s expected to move up to 140 on a permanent basis immediately after. He’s outgrown the 135-lb division.

Taylor trashes Teofimo for masquerading as the undisputed champion

“That little Rat Teofimo parading in on Canelo’s [spotlight] with his Mickey Mouse WBC Face with tears of joy What a f****ing brass neck. Embarrassing! The guy is so desperate it’s unreal. There are only two undisputed champs with ALL the belts. FACT! Thank you, goodnight,” said Josh Taylor.

“He’s an absolute clown,” said Josh Taylor to iFL TV about Teofimo. “Saying I’m scared. Why would I be scared to fight him? If the fight happens, I’ll happily slap him and bring him back down to earth, but right now he’s not on my radar.

“It’s a fact that he’s not undisputed,” said Taylor said of Teofimo. The WBC belt belongs to Devin Haney, he’s got the belt. How can you have three of the belts and the Franchise belt and call yourself undisputed champion when you haven’t fought for the undisputed title?

Teofimo will be his IBF, WBA & WBO lightweight titles against George Kambosos Jr on November 27th on DAZN.

“I’ve got other things I’m thinking about doing. I want to be two-weight world champion myself. I want to move up to 147 and fight your Crawfords and Spences and make history myself. He’s going about it the wrong way. He’s a f**** idiot. 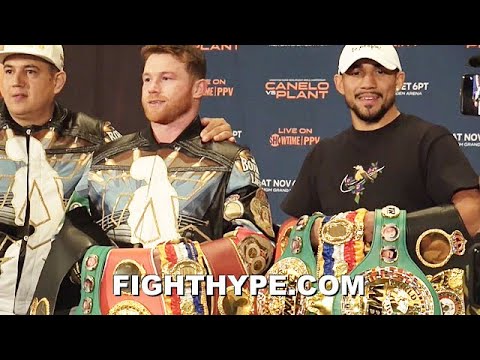