Just how totally one-sided, and largely unexpected, was Vernon Forrest’s big win over “Sugar” Shane Mosley? Hammering, almost knocking out and basically beating up Mosley, Forrest had arrived on the big stage in a big and impressive way. This was two excellent fighters, both unbeaten, going at it in a brilliant welterweight title fight showdown. Forrest, 33-0, met Mosley, 38-0, on this day, eighteen years ago.

Forrest had Mosley’s number – this often happening in the sport; a certain Ricardo Mayorga, for example, had Forrest’s number, beating him twice – as he showed when repeating the win in their immediate rematch (Forrest had also bested Mosley at amateur level). So how good was Forrest, or, a better questions, how great could he have become if he had landed certain fights. One with a man who calls himself “T.B.E” springs to mind. 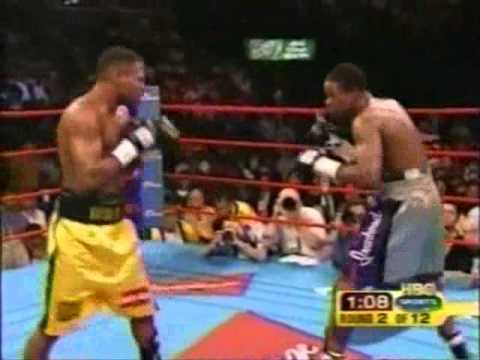 Forrest, a superb amateur, an even better pro, had his way with Mosley; “Sugar” never able to deal with Forrest’s poison. And as fast, dangerously powerful and in possession of a great chin as he was, the question is a valid one: would Forrest have beaten up Floyd the way he did Mosley? Why didn’t we get to see the fight? Okay, Mayweather was still operating down at 135 pounds when Forrest was hammering Mosley, but “Money” could have fought Forrest in 2006 or 2007. In fact, this was when Forrest was really calling Floyd out.

Forrest, who like Floyd would move up to win a world title at 154 pounds, bounced back from his upset losses to the unorthodox fists of Mayorga (being stopped and then losing a razor thin decision in the return) and he was then desperate to get it on with Mayweather. Indeed, this writer had the privilege of speaking with Vernon (at ringside at the Mayweather-Carlos Baldomir fight in Vegas; this not long after Forrest had scored a controversial decision win over another avoided fighter in Ike Quartey) and Vernon (a most classy individual who really was a joy to be around, a man with time for everyone) made it clear he wanted that shot at Mayweather.

He never got it. But what would have happened had he done so, say right around the time Mayweather had scraped past a slightly faded Oscar De La Hoya at 154?

It’s been said many times how Floyd was both a cherry picker and a very smart one in plotting his way through his famous 50-0 pro career. Mayweather fought De La Hoya and Mosley, sure, but he waited until both were past their dangerous best, and he was still troubled by both. Trouble, plenty of it, is what “The Viper” would have given Mayweather.

No way would the 2007 and onward, safety-first and punch conservative version of Mayweather have beaten the deadly combination of precise punching, killer instinct and punishing jab that belonged to Forrest. It might have been a truly great fight and it might have been damaging. Actually, the more one thinks about it, the easier it is to see why Mayweather never fancied the fight.

Mayweather deserves to go down as THE smartest, cleverest and most thoughtful prize fighter of his era. But he wasn’t the best. The hard fights, the testing fights, the defining fights, including one with Forrest, are sadly missing from Mayweather’s resume; impressive though it is. Would Forrest have messed up Mayweather and his shining record the way he did Mosley and his perfect pro ledger? It’s down to debate and nothing more, of course, but it really does take a very strong argument to convince many fans that Mayweather would have been able to overcome, much less dominate a peak Forrest.

It’s a fight that could have happened, but Floyd Mayweather Vs. Vernon Forrest is another of the big ‘what if’ showdowns in boxing.