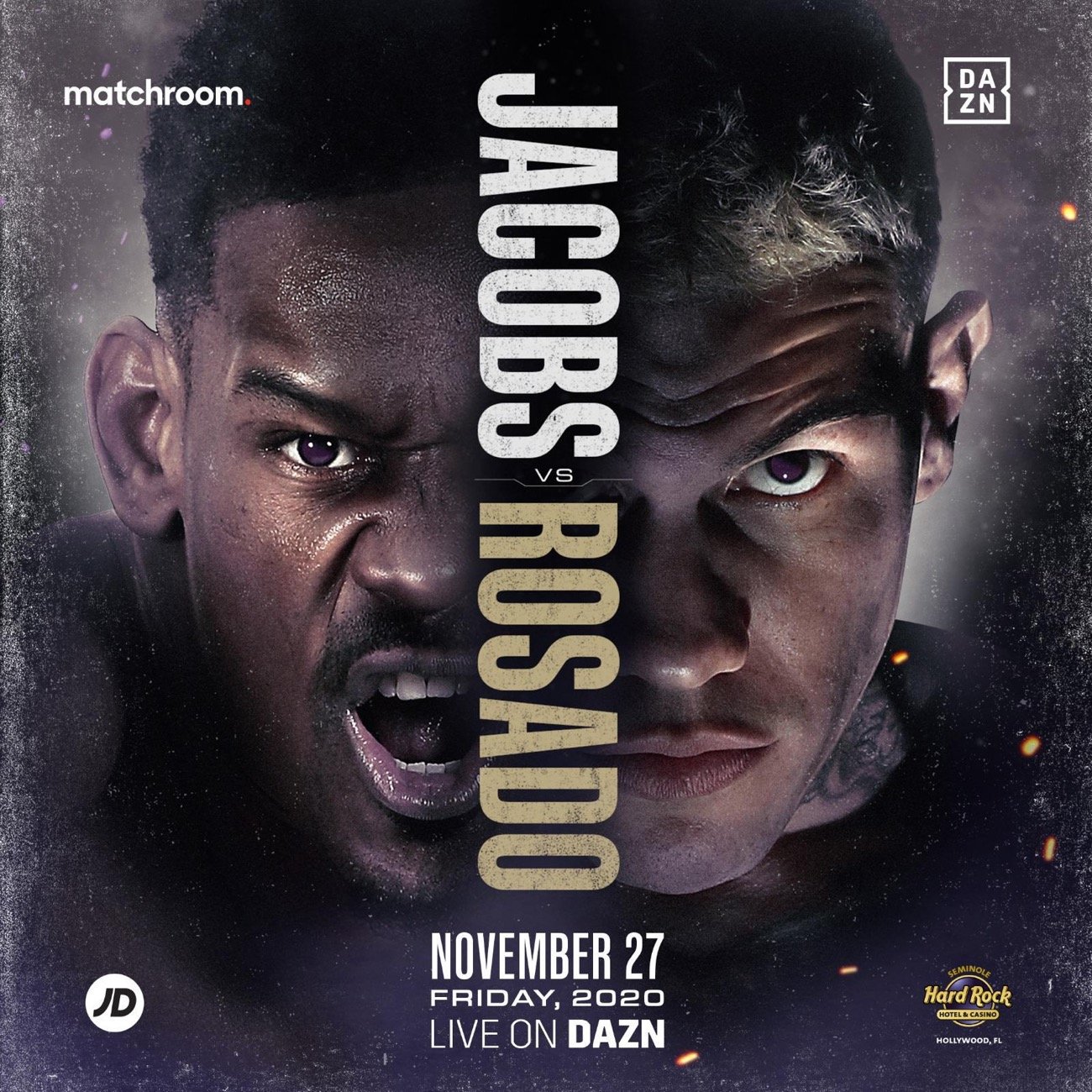 Daniel Jacobs says Billy Joe Saunders has been avoiding him like the plague all these years, and he’d like to challenge him for his WBO super middleweight title after he gets Gabe Rosado out of the way this Friday night on November 27th on DAZN.

The former IBF/WBA middleweight champion Jacobs (36-3, 30 KOs) is coming off an eleven-month layoff when he takes on the two-time middleweight world title challenger Rosado (25-12-1, 14 KOs) at the Seminole Hard Rock Hotel and Casino in Hollywood, Florida.

For his part, Saunder (29-0, 14 KOs) is defending his WBO 168lb title against former four-time world title challenger Martin Murray (39-5-1, 17 KOs) on December 4th on DAZN at the Wembley Arena in London, England.

Saunders is expected to bet the 38-year-old Murray, but you never know. Murray has a little pop in his punches, and Billy Joe has looked unimpressive in his two fights since moving up to 168 in 2019.

Saunders has talked of wanting to fight Demetrius Andrade, Canelo Alvarez, and Callum Smith. It’s unknown whether he would fancy the idea of defending his WBO title against 33-year-old Jacobs. 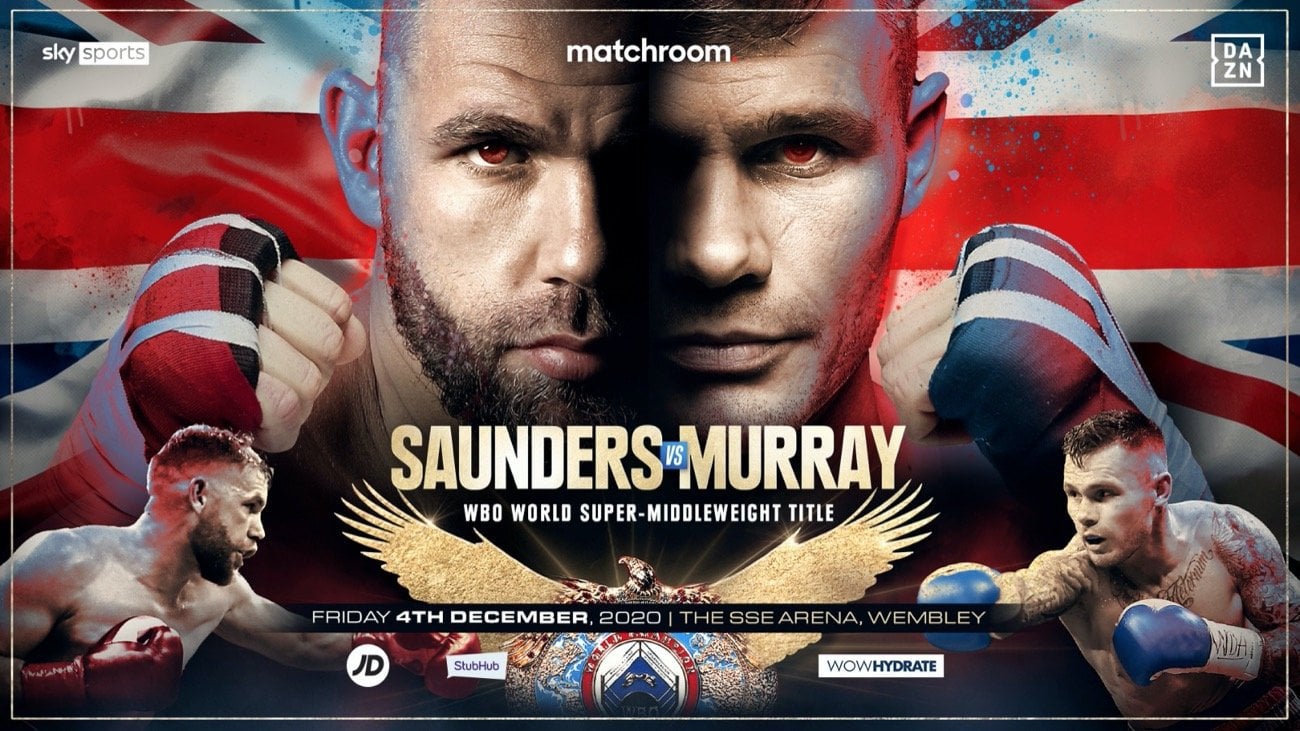 Jacobs is a high-risk, low reward type of fight for Billy Joe, who can arguably make more money fighting Canelo or Callum.

“Me being out of the ring for a year, I feel he’s the perfect opponent for me to get in there and get acclimated,” said Danny Jacobs. “I don’t project I’ll have rust, but I want to fight a guy that I can go on and fight my immediate fight against the top dogs of the middle and super middleweight divisions.

“100 percent,” said Jacobs when asked if he’d like to fight Billy Joe Saunders. “For years, I’ve been calling out Billy Joe, and I guess I’ve been quiet in the last year or two because he’s never said anything back to no avail.

“We’ve been very adamant about fighting Billy Joe, even when he was in the middleweight division. I feel like he’s avoided me for a long time.

“I got tired of calling him out, but I feel like as a champion, I feel like there’s only going to be so many ways that you can avoid a fighter, especially if I’m putting myself in a position and we have the same management and just the same promotion.

“I feel like it’s only right. If I had that opportunity, I would go for it as well. 100,” Jacobs said when asked if he feels like Saunders has been avoiding him.

Also, IBF super-middleweight champion Caleb Plant is someone that U.S boxing fans would like to see Jacobs fight. 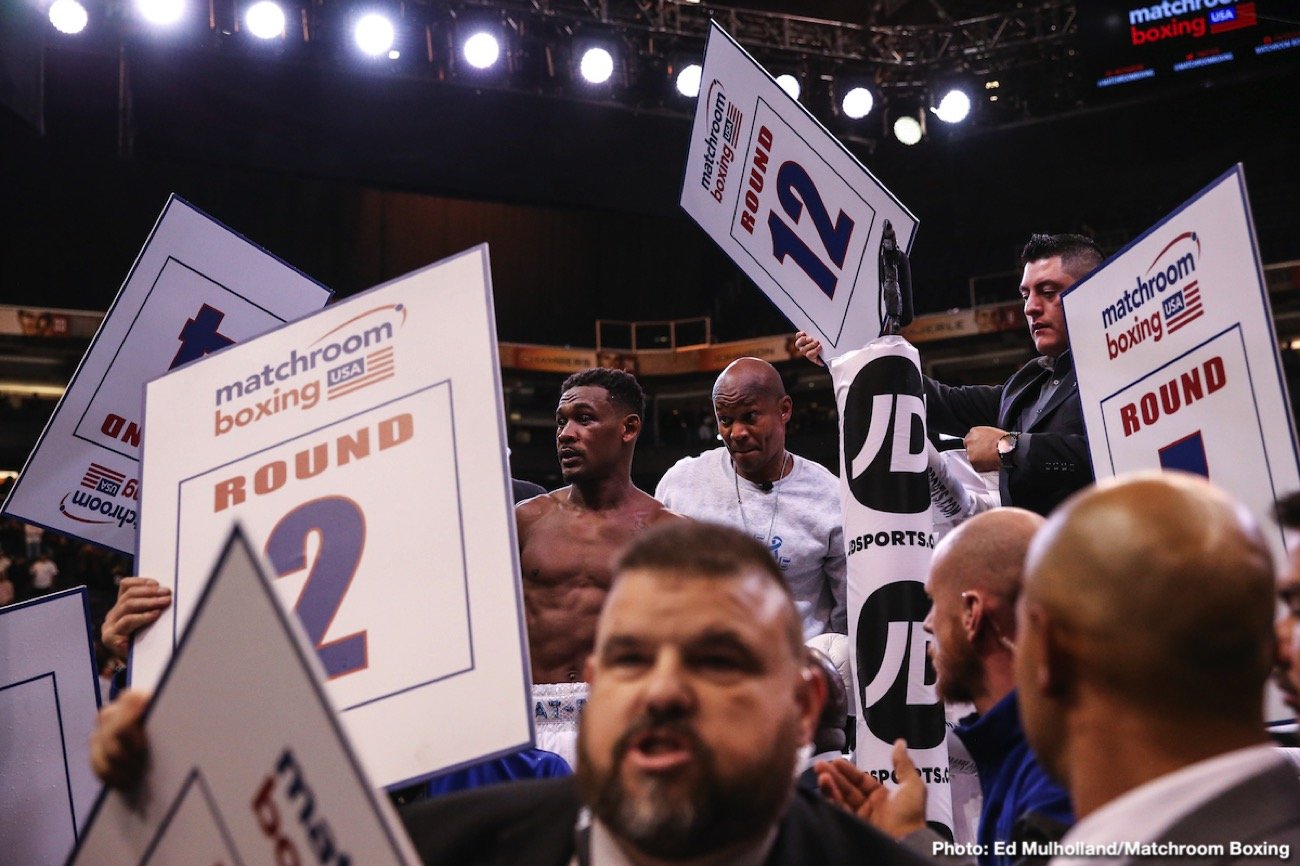 Saunders has hurt his popularity by fighting weaker opposition since his big win over Andy Lee many years ago in 2015. Although Saunders has captured world titles at 160 and 168, he’s won the belts against pedestrian level fighters.

“My focus is really on Gabe Rosado this week, and what’s after that, to me, is really what my promotion has for me,” said Jacobs.

“But I have guys on my mind that I would love to fight for sure. I’m hoping to give the fans a good fight because he’s that good Rocky feel that keeps coming after getting battered.

“It makes for a good fight. In his last fight against Sulecki, people counted him out, but he went down a couple of times and almost stopped Sulecki coming back.

“It serves as a good fight, and I’m just blessed to have these opportunities and still give the fans entertaining fights.

“I just felt being out of the ring, this was the perfect opponent,” Jacobs said in defending his choice of Rosado. “There are also levels [in boxing].

I’ve been criticized a lot for taking this fight, but it’s still going to make for a great show. It’s not because of who he is and what he does, star power, and me having him on my resume,” said Jacobs.

The choice of Rosado, 34, wasn’t a good one for Jacobs, as he’s coming off of a win over Julio Cesar Chavez Jr last December, which was a tune-up as well. Jacobs has lost a year of his career by investing the time on Chavez Jr and now Rosado. 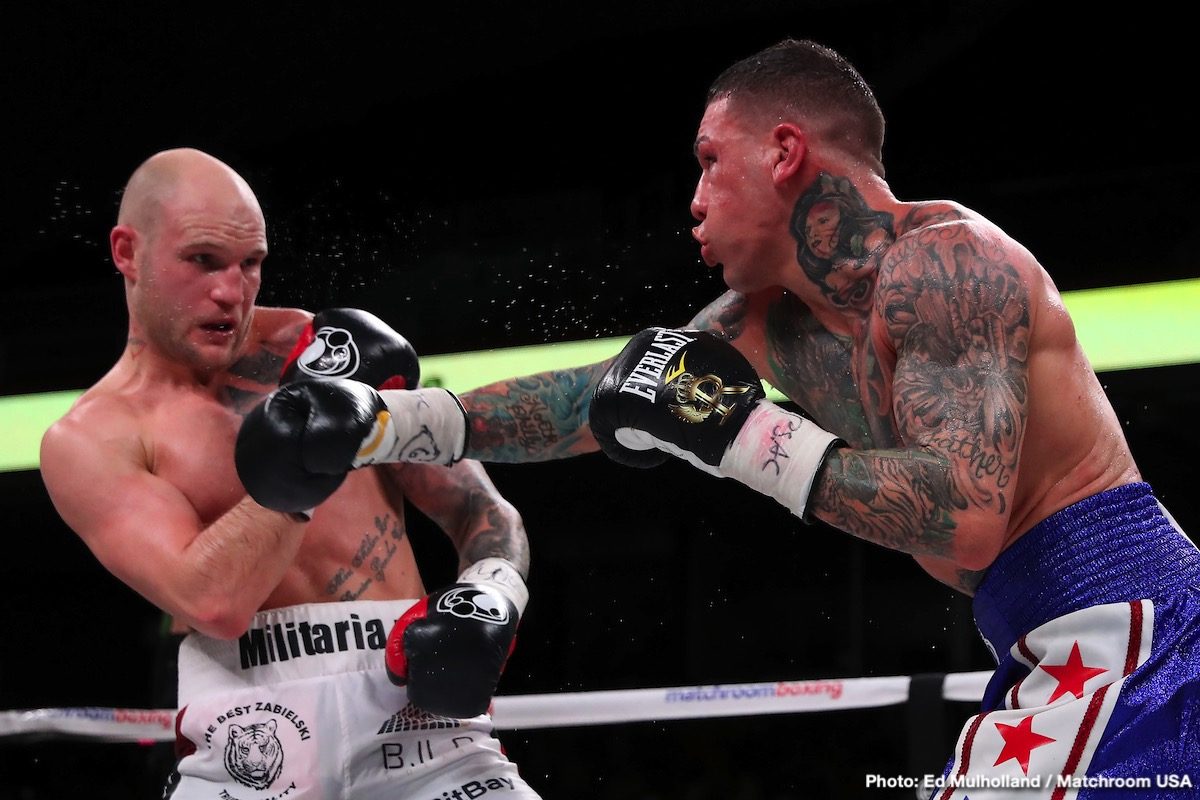 Jacobs is strategic in picking weaker fighters so that he doesn’t lose and mess up his chances for a rematch with Canelo Alvarez.

Jacobs lost to Canelo in 2019 by a competitive 12 round unanimous decision, and he’d like a rematch.

Jacobs could have fought anyone at 168

“I could have easily fought anyone in the [168-lb] division,” said Jacobs. “I thought me choosing him; I thought it was weird that he would say that I’m choosing him because of me wanting Gabe Rosado on my resume.

“Yeah, I want to hurt this man, and yeah, I want him to eat his words because of all the disrespectful things he said to me as a man, and I have that opportunity.

“I don’t feel like a win over him will catapult me [to the next level]. I’m in a position now where even if I didn’t take him as an opponent; I’m still in the position to get a world championship opportunity.

“Would it make a statement for me [to knockout Rosado]? I don’t think so because he’s already been stopped before. Maybe not knocked out cold.

“Maybe that’ll give me bragging rights, but I don’t think it’ll catapult me in any way. It’s projected from my pees [that I’ll win]. 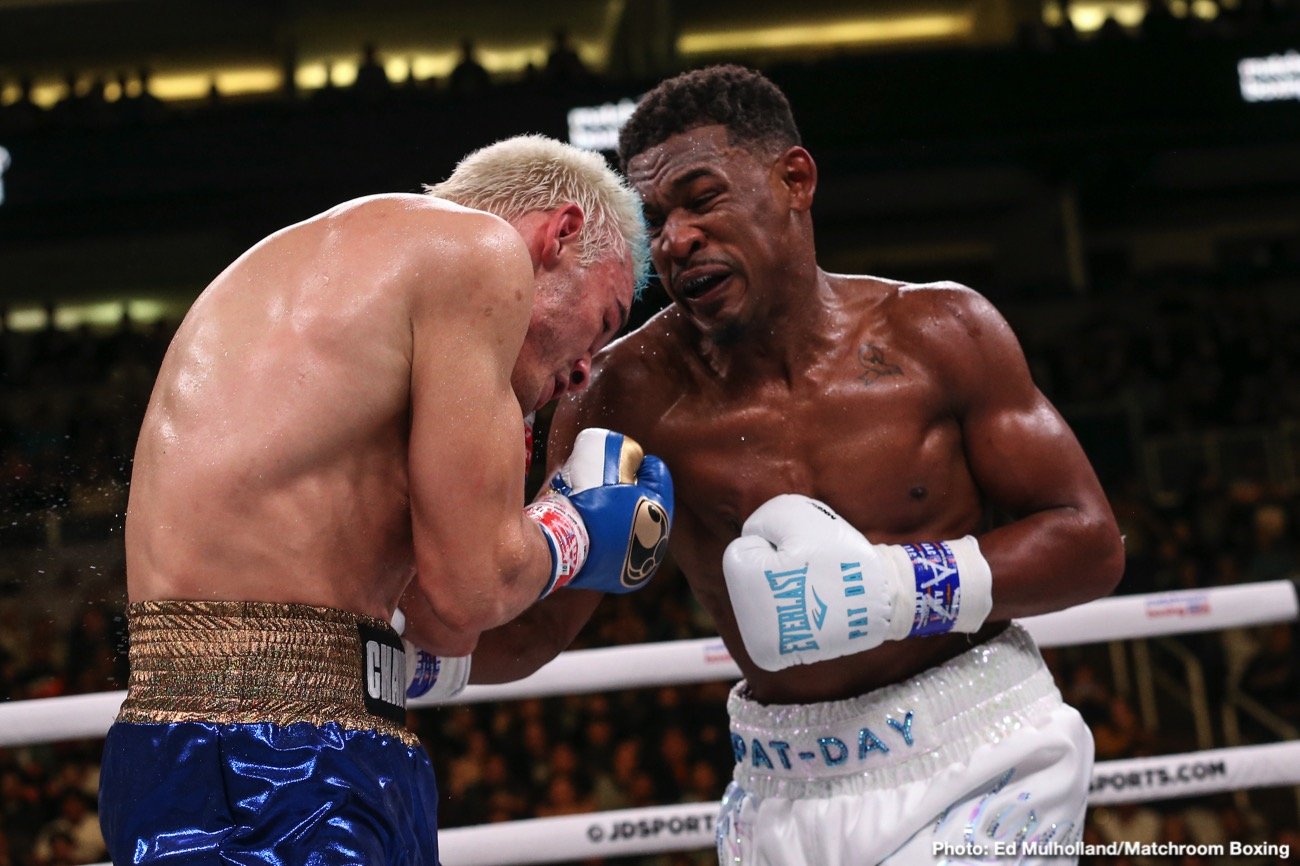 “What are the odds? 30 to 1 or something like that? I’m just looking to go in and put on a great show against a very durable guy, who is going to put on a valiant effort,” said Jacobs.

It’s wise that Jacobs is careful about the type of opposition he faces at 168, as he would have difficulty against Callum Smith or Caleb Plant.

Those are not the type of fighters you want to fight if you’re coming off a one-year layoff like Jacobs.

The difference in skillsets

“We’ll see what happens. When you fabricate things about how I’m not an entertaining fighter, I think his whole claim to fame is I don’t put a**** in seats.

“There’s a skillset difference between us both. Gabe Rosado is, in my opinion, a gatekeeper. He’s a good gatekeeper, and he’s a durable one, and he puts a valiant effort.

“He’s one that most boxing fans would appreciate. He has a good story. He doesn’t come from an extensive amateur background, and he’s able to be in these top fights and give these top challengers and champions a good show.

“For me, you can still have that, but don’t discredit what I’ve done because what I’ve done is, on the whole, another level than what you’ve obtained.

“My message is inside the ring; I’m done talking,” said Jacobs when asked what message he has for Rosado. “I’m not even a guy to go back and forth with this fight like I have for this fight.

“This has been a very awkward buildup because yeah, it’s personal, but at the same time, it’s not my forte, that’s not my MO. I’m not a guy that likes to talk trash. 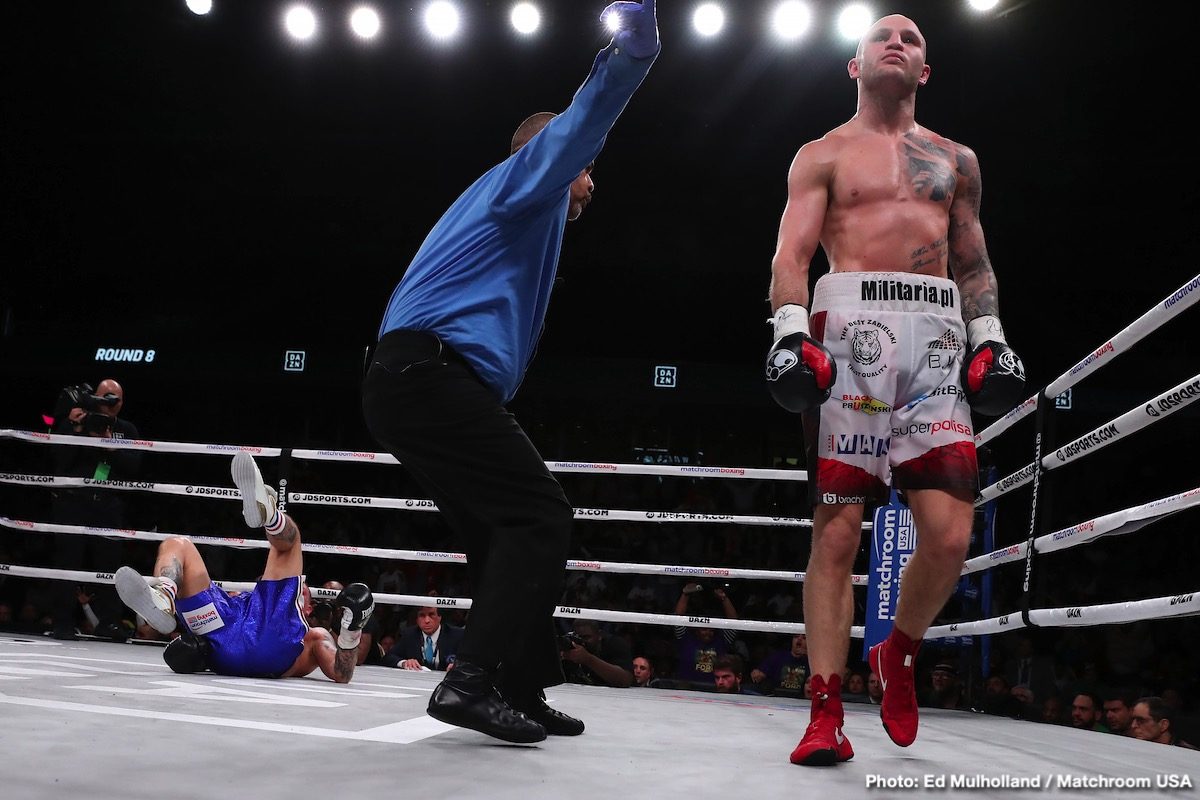 “I respect my opponent because of what all fighters have to go through when they step inside the ring.

“When you’re blatantly disrespecting like the disrespect that I’ve been receiving, I had to stand up for myself as a man. And as fighters, we settle our differences inside the ring, and that’s what I’m looking forward to doing,” said Jacobs.

Rosado looked terrible against Maciej Sulecki last year in March when he was dropped twice by him.

If not for Sulecki running out of gas in the ninth round, he probably would have stopped Rosado. In the 9th, Rosado knocked Sulecki down twice.