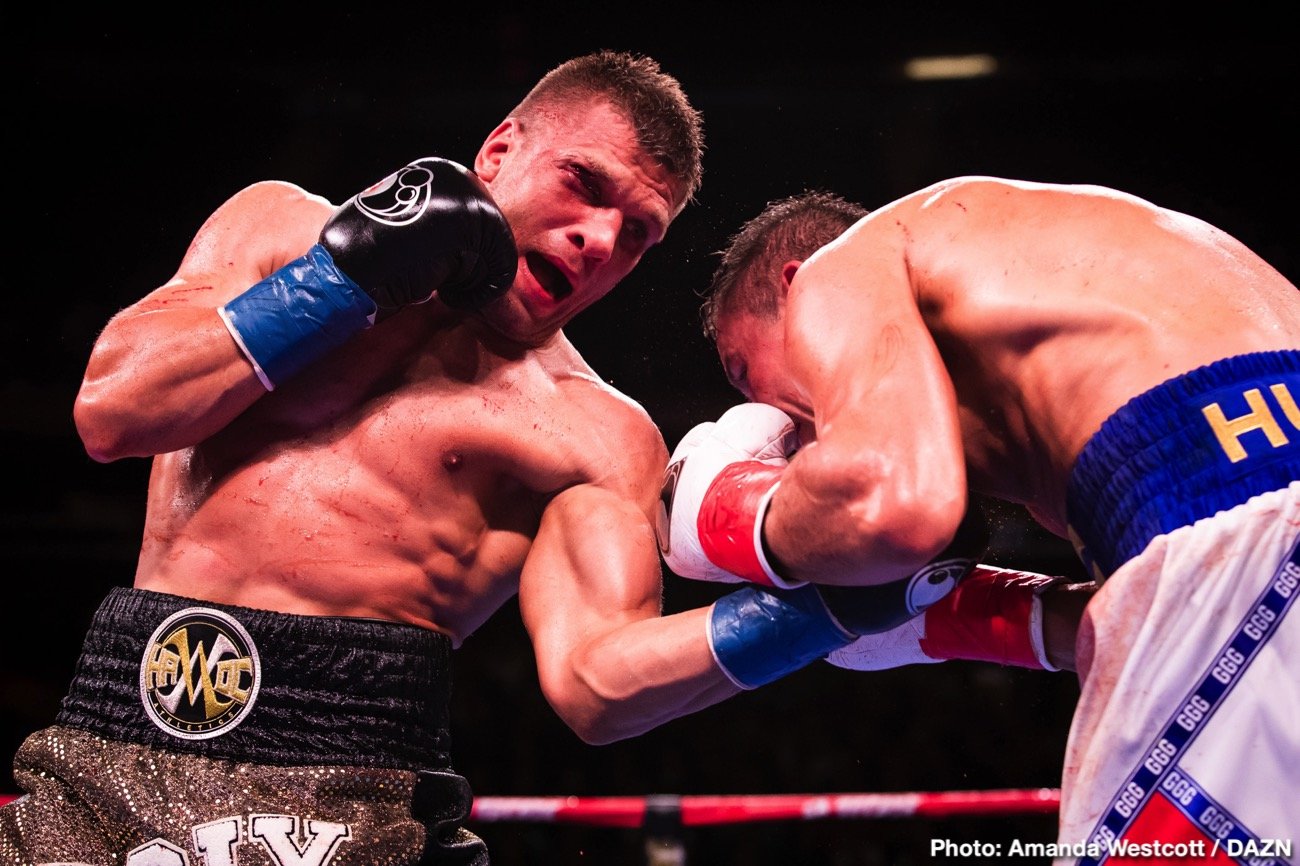 Sergiy ‘The Technician’ Derevyanchenko will look to take advantage of his superior technical boxing ability to defeat WBC middleweight champion Jermall Charlo on September 26. Derevyanchenko (13-2, 10 KOs) has an excellent blueprint to follow from Charlo’s fight against Matt Korobov in 2018.

Charlo (30-0, 22 KOs) appeared to lose the fight to Korobov (28-3-1, 14 KOs), but the judges gave it to him. That fight showed how to beat Charlo by boxing and to counter him with shots. Like his twin brother Jermell Charlo, Jermall loses his cool and is easily frustrated.

Derevyanchenko and Charlo will be fighting on Showtime pay-per-view as part of a doubleheader at the Mohegan Sun Casino in Uncasville, Connecticut. The other important fight is WBC junior middleweight champion Jermell Charlo fighting IBF/WBA 154-lb champion Jeison Rosario in a unification fight.

Derevanchenko will need to mix up his game for him to beat Charlo because whatever plan he uses, we’ll see Jermall adapt to a certain extent. For Derevyanchenko to win, he’s going to need to mix it up and avoid getting clipped by Charlo’s big shots.

Derevyanchenko made a big name for himself in his last fight against Gennadiy Golovkin on October 5 last year in fighting for the vacant IBF middleweight belt. GGG (40-1-1, 35 KOs) beat Derevyanchenko by a 12 round unanimous decision, but the boxing fans and the media all had Sergiy as the winner.

“There’s nobody that I think this young man [Derevyanchenko] can’t beat. There are people I don’t want him to fight, but there’s no man that I don’t think he can beat.

“He’s always coming in ready to work, and he’s a fantastic contender, and he’s a wonderful human being. I don’t think there’s anything he can’t do well. 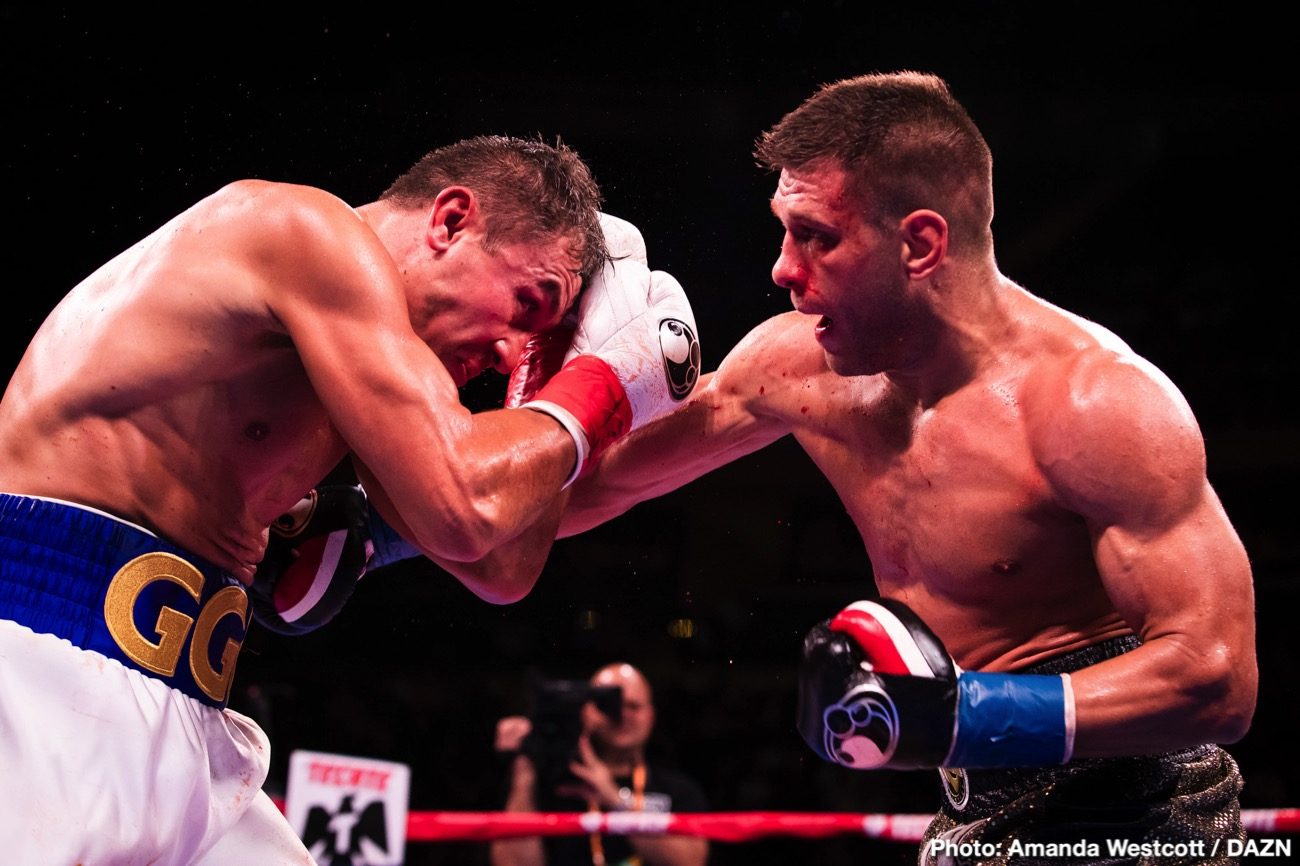 “The real people know that Sergiy is the real deal, and they know this is not an easy affair for anybody that wants to fight ‘The Technician,'” said Rozier.

The comment that Rozier made about guys that he doesn’t want Derevyanchenko to fight likely involves Canelo Alvarez, who he had an option of facing next if he’d wanted to on September 12.

Rozier made it clear that he preferred that Sergiy fight Charlo rather than Canelo. It’s not that Derevyanchenko is ducking Canelo.

It’s likely more of a case of Rozier believing that Derevyanchenko has a better chance of winning a decision facing Charlo than Canelo, who has been involved in several controversial decisions.

If Derevyanchenko fought Canelo, he’d likely need a knockout to win because the judges might not score it favorably for him. Canelo is the face of boxing right now, and it’s not likely that he would win a decision against him.

Charlo, 30, is popular too, so Derevyanchenko can’t just stay on the outside and box or 12 rounds and assume that the judges will give him the decision. He may need a knockout to win as well.

“So he’s bringing it, and this is his swan song,” said Rozier about Derevyanchenko. “This is his third attempt at a world title. I thought he won the second one, but we didn’t get it.

We can’t fail this time. He’s not a prima donna, and I’ve worked with prima donna’s in the past, and I’ll never work with another prima donna as long as I live. He listens.

“He doesn’t have much to say other than what would you like me to do. That’s how a young man becomes a world champion. He’s going to box, and he’s going to frustrate him and keep him off balance, and that’s all I can say.

“Charlo is a tough young man, strong, but so is Sergiy. I think Sergiy has the experience just in the capability. He never loses his balance or his frame of mind, and I think that’s when you’ll realize how good Sergiy is,” said Rozier.

Derevyanchenko lost to former Rozier fighter Daniel Jacobs by a close 12 round split decision in October 2018. That fight wasn’t seen as a robbery, but a lot of fans did view it as either a draw or a win for Sergiy.

It’s unclear what Rozier means when he says this fight is Derevyanchenko’s “swan song.” Perhaps Rozier is confused about the meaning of that term. What it means in the literal sense is the ‘final performance’ of the performer, but that doesn’t make sense in Derevyanchenko’s case.

Why would Sergiy retire if he loses to Charlo? Derevyanchenko would still be young enough to rebuild, and come back to challenge for another world title, be it against Charlo or Gennadiy Golovkin.

“He fought GGG, Danny Jacobs, and he’s fighting Charlo,” said Kenny Robles to Fighthype on Derevyanchenko. “He’s one of the highest calibers. Just to share the ring with him, you learn little tips and tricks.

“He’s a technician, and he’s called ‘The Technician’ for a reason. Sergiy needs to force the pressure and dictate and control the range. To amass that skill, you don’t see everything in Sergey’s last fight against GGG.

“Yeah, he dominated. I thought he won hands down, and the other fight, I thought he [Charlo] lost against [Matt] Korobov. I watched that fight live. I thought it was close, but he [Korobov] pinpointed his shots.

“So I feel like that was the blueprint. So, Sergiy is going to come with a good plan. He’s ‘The Technician.’ I think he’s going to take it hands down,” said Robles in picking Derevyanchenko to beat Charlo.

Korobov boxed Charlo and was able to land a lot of shots. Charlo might have done better had he taken advantage of his power, youth, and size, but he fought like he didn’t trust his chin. That was a wrong style match-up for Charlo, who was facing a guy with superior boxing skills.

Derevyanchenko will need to do a lot more than Korobov to get the win because he’s the champion and the A-side.