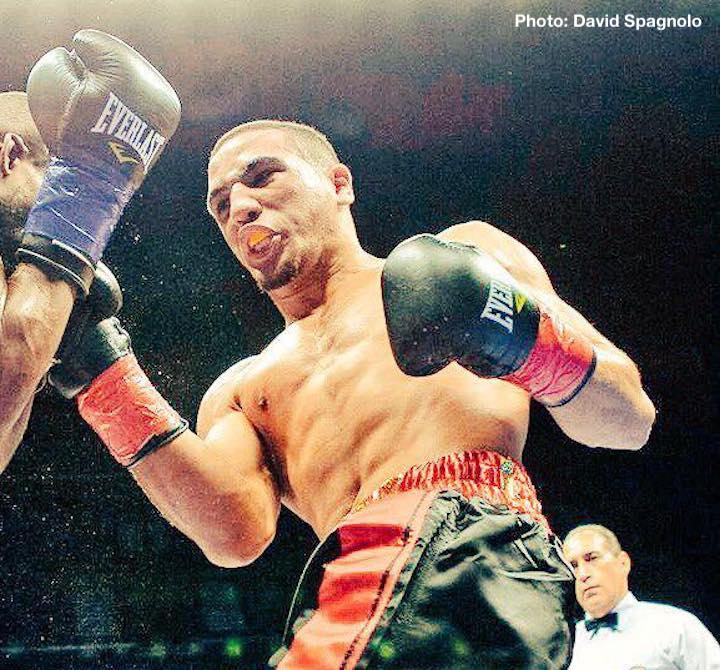 Anthony Laureano is a 23 year old rising prospect in the boxing game today – An extremely hard working and focused young man, Laureano is a throwback type of fighter. He put the hard work in each and every day, strives to learn the finer points of the game and approaches each fight like a Do Or Die event.

Thus far Anthony and his team have chosen a unique path to success in the boxing world. They have not shied away from tough competition thus far and, in fact, have had to dig down and overcome several very stiff challenges from eager opposition. Laureano’s last two opponents in particular, Tobias Green (7-1) and John Hernandez (8-2), both provided extremely tough challenges in bouts that forced “Action” Anthony to dig down to places that most up and comers simply aren’t forced to go until quite a bit later in their careers.

Both performances drew rave reviews from fans and media alike and compelled me to conduct this interview with one of the best professional prospects the Hartford-area has seen in many years.

Humble, clean living, fearless, hard working and as fan friendly and approachable as they come, undefeated (7-0) Anthony Laureano is definitely one to root for.

The following is a 10 question interview in advance of his June 30 bout at the Mohegan Sun Casino in Connecticut against Juan Rodriguez (8-9-1) of Haymarket, Virginia on Star Boxing show that features contender Joe Smith Jr. in the main event against Melvin Russel in a light heavyweight match up.

How did you originally get started as a boxer?

LAUREANO: My father put me in boxing. He wanted us to stay active and in shape. I originally started boxing at age 8 with (former lightweight contender) Pito Cardona. We used to follow him everywhere he went to teach us some techniques. I started competing at age 11 or 12 in a garage. Where the ropes were sheet rock walls. The ring floor was a rug and in the winter time you’d better bundle up. I would go to the gym in all types of weather. Snow, rain and heat waves. I didn’t care, I would just go on my bike. Right after school I would get my big bag ready and get my bike ready to ride.

What are your goals as a fighter? What do you want to do in this game?

LAUREANO: My goal as a fighter is to become champion of the world. It would be an achievement that I could share with the people. In this game I want to show that no matter how hard it is at first you still can accomplish big things. With hard work, dedication and will power anything is possible. I want to put God first. I want to give people hope.

In your opinion what was the highlight of your amateur boxing career?

LAUREANO: The highlight of my amateur career was my first fight with my trainer Angel Gonzales. This fight changed everything. I felt had the talent, but I was coming from a back to back losing streak. This fight was a close one. I was just getting ready to lose because when it was close I never got the decision. Angel yelled at me “What;s wrong with you? You don’t do this in sparring. You better show me something!!!” I went out that round and gave the kid two standing 8 counts in the 3rd round. This fight was the turning point of my career. This made everything possible.

So far you’ve faced several tough opponents for someone with only a few fights yourself under your belt. And as long as I have known you its been very obvious that you are not shy about stepping in with the tougher competition. Where do you think that comes from? Where did you develop this mindset?

LAUREANO: The reason that I’m not shy about taking on competition is because I have faith God. I failed a lot in the amateurs so I know what it is to lose. Every time I lost one of my amateur fights I went right back at it the next day. Of course, I felt like I shouldn’t be in the gym. I even felt embarrassed to go to the gym. I wanted to be something in the sport of boxing, though,so I didn’t care what other people thought. The reason I’m willing to take on better competition is to prove to myself and get better as a fighter.

How did you begin working with your trainer, (1986 New England Golden Gloves 106 pound champion) Angel Gonzalez, and what is the training like?

LAUREANO: Angel Gonzalez was always around me. He would do little group exercises and I’d jump in sometimes. I eventually got to work with him when I was looking for a new trainer. I even thought about doing Muay Thai, but I still had a love for boxing. So I went back to boxing and started training with Angel. Angel gave me discipline in the sport and that was something I needed. After my first pro fight, Angel spoke to Nate Torres and ask him to help him train me. Nate accepted and now is my manager and co-trainer. The professional game is different and we must continue to improve my skill set in order to continue my success as a professional boxer.

I have a great team now. Truly blessed!

Were u a boxing fan growing up or are you one now? Who did you grow up watching in the sport and who are your favorite boxers?

LAUREANO: My favorite boxers of course are the fighters who take risk and keep coming forward. I look up to Mickey Ward and Arturo Gatti wars. Growing up I just really loved doing boxing. It’s really an art form. There is Lomachenko, he shows that it’s sometimes just a master in his angles. I see fights of his to learn new things that I like. Adrian Boner when he is on his game boxing is really nice to see. Of course, people really down play him but, if you take all the drama and leave it to the side, he is really something to see when he has it together.

Do you have anyone in the sport who you try and emulate as a fighter? What boxers influenced your style as a professional fighter?

LAUREANO: My style is like Ward and Gatti in terms of heart and will to win. My trainers say my style resembles Miguel Cotto at 140. Similar left hook to body and boxing style. Miguel is a warrior with no quit in him and I’d like for people to see that in me, too..

I also really like Mikey Garcia today because he is a complete fighter. He takes on big challenges. Can adjust to any situation. He has such good speed and power. Even after a two year layoff he still came back so strong.

What is the best thing about being a professional boxer?

LAUREANO: For me the best thing about being a pro is I’m doing what I love. Using the gifts that God gave me to honor him. Also the opportunity it creates to provide a better life for my family.

So far what has been the toughest part of being a professional fighter for you?

LAUREANO: I would say the toughest part about being a professional fighter is just managing life and training. Right now I’m in the come up. So it’s tough I would love to work but, then I would lack in training. It’s managing the people around you some support and some don’t. So you really just got to stay with positive people that support. Your mindset is everything so if your failing to manage your emotions it will hit hard when you got a fight coming up.

At this point in your career you are still working your way up, fighting on undercards in preliminary bouts. Spots often open up on these smaller cards on short notice. How long would you need to get ready for a fight if called for one?

LAUREANO: I’m always ready for a fight because I don’t take anytime off from the gym. I do my cardio at a fitness club then I do my boxing later on in the day. Always.