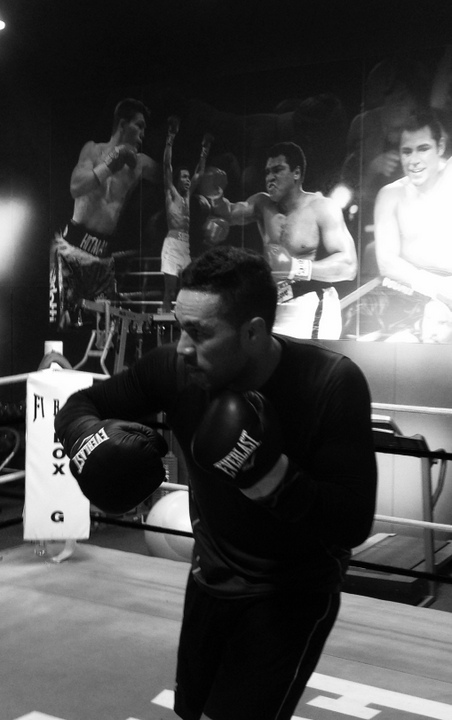 Boxing is often referred to as ‘the hurt business’ and over time the sport has been littered with many casualties, oftentimes angry young men whose star burned brightly but then faded just as fast, the dark energy that propels them to the top inevitably proving unsustainable over the long term. Sitting down with Joseph Parker you sense none of that. Instead you find a young man at ease with himself and the environment around him.

Talk which starts with boxing soon moves on to family and friends, a subject that is never far from Joseph’s mind. But it is a deceptive energy because make no mistake; once the opening bell rings, as he has proven in recent fights, he is all business.

ESB: You must be excited to be back on home soil fighting in front of your family and friends. I understand that your parents have been able to watch you fight overseas as well?

Joseph: Yes, America and Germany and a few other places. My mum arrived in Germany when I was fighting and she just cried, she was so excited and happy, grateful to attend the fight. They’ve had the opportunity to travel a few places in the world which is something they’ve never expected and I’m so happy that they can do that.

ESB: Talking a little bit about family whenever I hear people ask about how training is going or how sparring went with Klitschko etc I often hear you reply ‘me and Izu’ or ‘Izu and me.’ It seems like although this is an individual sport you very much have a family or team type atmosphere going on.

Joseph: The reason I say that is that we do everything together. We are in the same weight class and we do have the same goal of becoming champion and who knows our paths may one day cross but at the moment me and Izu are doing everything together and he’s a great training partner.

ESB: And you two have become good friends as well?

Joseph: He’s not only a good person to train with but he’s a great person to be around as well.

ESB: I you can have your trainers, promoters, friends and family but at the end of the day the only person who truly understands what a fighter has to go through on a daily basis is another fighter?

Joseph: Yes, maybe your coach and another boxer. Another boxer is doing exactly what I’m doing; they go through the same kind of hurt and pain. He feels exactly the same.

ESB: And with Izu plus Kevin and his wife and kids you’ve got a kind of de-facto family over there in Vegas now. How much has that helped you being so far away from home?

Joseph: I think if I didn’t have the structure we have in Vegas now it would have been a lot harder. The first time I went over it was a little hard, something new, away from home and family and friends but the way Kevin and Tanya took me in and treated me from the start it made it so much easier. The second time I went back it was like going home. People say ‘don’t you miss home?’ and yeah I do miss home but I have a second home now. I must say I wouldn’t have any of this opportunity if I wasn’t with Kevin. Me and Kevin make a great team. And without him I wouldn’t be where I am today.

ESB: In many ways as Tyson says the happy fighter is the most dangerous fighter.

Joseph: If you’re happy and in a happy environment and happy with things behind the scenes then you’re gonna be happy in the ring.

ESB: Yakup Saglam is a fight taken at short notice. How hard is it to take a fight on short notice or is it more important that you implement your game plan from the outset so that the opponent is, I wouldn’t say irrelevant, but that you don’t give them the opportunity to fight their type of fight against you?

Joseph: I think my ultimate goal was to train hard and to just be as prepared as I can be. Now the fight is signed we’ve seen some of his fights, seen the dangers he presents, but I agree it is more important to get our game plan going.

ESB: Clearly coming into your backyard I don’t think it will be any surprise to think that he will come out fast looking to throw some big bombs early like he did against Solis.

Joseph: I know he’s gonna come out fast. I know he wouldn’t have signed for this fight if he didn’t believe in himself. But Kevin’s been teaching me new things all the time, my skill level has gone up, my fitness has increased tremendously and I’ve just got to use my boxing skills.

ESB: The template that I see Kevin wanting to implement with you in all your fights is to be first, control distance with the jab and throw body shots off of the jab. Would that be a fair assessment?

ESB: I remember with the Costa Junior fight Kevin saying to you in training that he wanted you to come out first and for him to feel your power straight away. I guess something similar will be in order for this fight?

Joseph: That’s pretty much the plan; you establish your jab and establish your power so that he can actually feel it which will make him a bit wary from trying to put on too much pressure.

ESB: The thing that sets you apart from other heavyweights is your speed. Can you tell when you face opponents in the ring that they are surprised when they experience it? Was it something that you think surprised even Wlad when you sparred him?

Joseph: To be honest I think he was a bit surprised. Like when I faced Brian Minto he said that he had seen me fight, he knew I had speed but when he was in the ring it was a different thing to experience it. So I think Klitschko was a bit surprised with the speed, but y’know he handled everyone there because he is a defensive genius. He’s been in the sport along time.

ESB: One other thing I wanted to ask you. There seems to two schools of fighters, those that want to get into a ball of rage before a fight like Tyson, James Toney was another one, and then you get the polar opposite like Manny for instance, walking into the ring smiling then the first bell sounds and it’s all go. Obviously you are in the second camp; clearly relaxation plays a big part in your camp?

Joseph: Everything now is about enjoyment. We like to crack jokes, even though the work is hard, enjoying what we’re doing. So I can definitely relate to the second option.

ESB: At what point do you go into total game mode and flick the switch?

Joseph: As soon as we touch gloves and the referee says have a good fight, then I go back to the corner and hug Kevin and then (clicks fingers) I switch it on. Sometimes if you’re too tense it drains you. Nothing flows if you are too tense.

ESB: I also notice that when you knocked out Costa Junior you were a little bit concerned about him as I guess a fighter knows when he’s landed a great shot. So the minute you’ve hit that punch you switch back into being Everyday Joe?

Joseph: As soon as the fight is finished and depending on what state they are in, I saw his (Costa Junior) eyes roll back and I was ‘damn’ and the first thing was to make sure he was alright. It’s important to do the job but be human as well.

ESB: I would imagine it would be tiring to always carry anger around.

Joseph: I haven’t experienced that kind of anger but I’ve seen people like that and it must be tiring. I mean how can you carry that anger around all the time? (Laughs) Anger is one thing I would never want to carry around.

ESB: You’ve fought in March, you’re fighting now in June and then in August, October and December. How are you enjoying the busy schedule and how is both the body and mind holding up?

Joseph: I love it. It gives me less time to veer off away from training. I do get times to rest after the fights. I love fighting often, I love keeping in shape. I’ve had a little bit of shoulder soreness in a couple of fights but that’s been taken care of.

ESB: The reality is a fighter through their whole career will always be carrying some bumps and aches.

Joseph: Correct. But as long as you get the proper treatment and rest you should be OK.

ESB: Doing a bit of yoga now I hear?

Joseph: Yeah (laughs) Izu told you? I did go to one yoga class but it was hot. I thought ‘this can’t be too bad’ but then you hold stretches for like 2 minutes and it’s surprisingly tough. We now have some private sessions and it’s been a big help.

Our chat concludes there. It is a bright and sunny mid-winter Saturday afternoon and sitting in the plush lobby at the Pullman Hotel feels a world away from the violence of the ring and that’s because it is. Yet there will be Joseph in just over an hour’s time, being put through his paces in a small and modestly appointed private gym, hitting the mitts in fast and decisive fashion, envisioning the hurt he is preparing to unleash on his opponent, just another step on the long road to a title, but always in the pursuit of happiness.