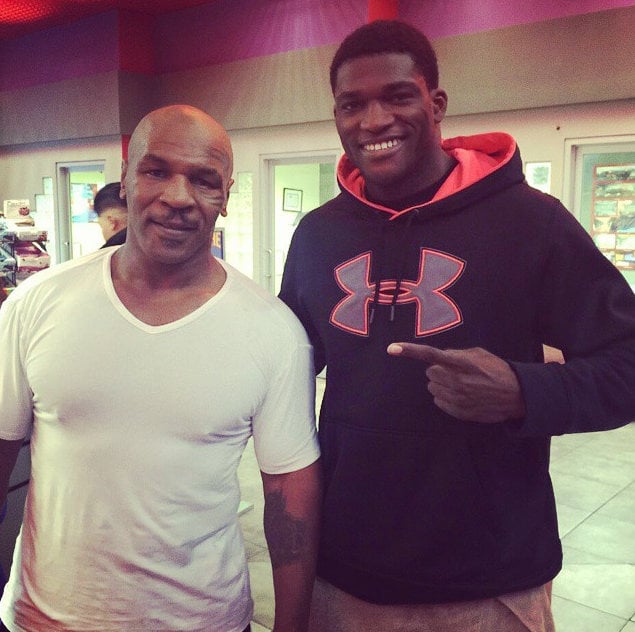 Joseph Parker’s stable mate and chief sparring partner has had a busy couple of months. Having fought in New Zealand in March he accompanied Parker to Wladimir Klitschko’s Florida training camp where he sparred numerous sessions with the champion giving him some of his best work. He is now once again down under to fight in his first 8 rounder against familiar veteran Julius Long.

Being part of a Joseph Parker fight in New Zealand means the inevitable press tour, which in the middle of winter may not necessarily be an ideal preparation for a fight. Still I assume it is nowhere as cold as Poland his country of birth.

ESB: Doing a press tour throughout the country you must have had an opportunity to see a bit of New Zealand. It’s cold right now but I assume you are used to that being born in Poland. Where were you born in Poland and how could did it get down there?

Izu: Szczecin, but I lived all my life by the seaside in Gdansk.

ESB: That gets really cold in winter right?

Izu: Oh c’mon there we get down to minus 20, that’s like c’mon man how do you survive in that?

ESB: I know what you do, you move to Las Vegas!

Izu: Well that’s the thing but it took me a while.

ESB: How does a week like this affect your preparation for a fight?

Izu: It is harder. Sometimes there are days that you don’t get training in, but you have to get your priorities straight and make sure you’re fit to fight. We can still do normal stuff but more high intensity and shortened sessions.

ESB: Here in New Zealand Joseph (Parker) gets to fight in front of his family and friends. Have your parents ever seen you in a boxing match and how do they feel about that?

Izu: Honestly that is a good question. I believe that my parents are always proud of whatever I do, from kick boxing through to boxing. But it wasn’t until I took the big step and moved out to Las Vegas and they saw how dedicated I was that I felt the most support.

Izu: We are five altogether and we all have different passions and my parents have always been very supportive of what we want to do. One of my sisters is a model, another one wants to be fashion designer, and she’s just gone to college.

ESB: So as long as your parents see you’re happy they are supportive.

Izu: They never made me feel as though there was something I couldn’t do and that makes things happen.

ESB: It used to be that the stereotypical profile of a fighter was an angry young kid from a broken home full of rage. That’s not so much the case these days?

Izu: Different people they possess their energy in a different way. The fire doesn’t have to come from anger, frustration or whatever. You can get your energy from loving your family and wanting to make them proud of you. It’s a matter of what kind of person you are.

ESB: Looking ahead to Saturday your opponent has been changed from Junior Pati to Julius Long who has a lot more experience. You must be happy about that knowing you will most likely get rounds out of him?

Izu: I am the fighter so I fight whoever they bring me. I trust Kevin Barry my coach. Junior Pati dropped out so this opportunity presented itself. It’s a much better test for me. I’m excited to fight Julius Long.

ESB: Julius Long is what, 6,10? Will this be the tallest guy you’ve fought and what sort of adjustments do you have to make bearing in mind your original opponent was 5,10?

ESB: What sort of specific improvements have you made under Kevin?

Izu: I feel like I’ve started using my jab better, trying to get myself into position to punch and working a lot on the body shots, mixing it up: up and down, up and down.

ESB: Is there anything you brought over from kickboxing that didn’t translate so well with boxing that Kevin wanted to get you out of?

Izu: Not necessarily just from kickboxing. We all have mistakes that we do, whether it comes from boxing or kickboxing, it’s all about getting rid of them and using the things that work for you. There was a lot to work on to make me better and better and there still is a lot of work to do.

ESB: Have you trained with this kind of intensity before, 3 times a day?

Izu: I have trained real hard. My ex-coach was a Russian so he believed in hard work.

ESB: I’m sure he probably had Rottweiler’s chasing you across frozen lakes!

Izu: (Laughs) No not quite, but we’ve done some extreme workouts like mountain climbing for 3 hours in winter, at minus 10.

ESB: So is the approach with Kevin a slightly more scientific one shall we say?

Izu: Yes, I would say so. Because the training, you don’t need to train for 3 hours if you are a fighter because no fight is gonna last 3 hours. Use what you will actually need.

ESB: Did you guys pick up tips or interesting bits of info from Jonathon Banks during your time with Klitschko?

Izu: Actually he did say something interesting in that when they are about to wrap up sparring they always use the fastest guys to end the camp. The reason being that is the last thing the eyes will remember. If you face a slow guy that will be the speed that your eyes remember and if you face a faster guy that will also be what the eyes remember.

ESB: I guess it’s lucky for you but unlucky for Julius Long that you are wrapping up your training for this fight with someone as quick as Joseph Parker.

In what has been a long build-up Ugonoh faces a good test against a journeyman who has proven to be a very durable opponent against some of the more familiar names in the division. Whether he goes all 8 rounds or ends up getting the stoppage this fight hopefully heralds what will be the first step up in a busy 12 months for the hard hitting Polish heavyweight.