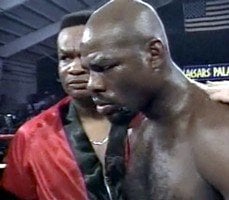 On this day 26 years ago, inside a packed Trump Plaza in Atlantic City, New Jersey, two bitter middleweight rivals went to war over 12 absolutely thrilling rounds.

Outside, snow covered the ground thanks to a blizzard, yet inside the arena the heat was scorching. WBC middleweight ruler Iran Barkley fought a thought to be faded legend in Roberto Duran and the fans in attendance witnessed both a modern day classic and a renaissance.

For all 12 ‘don’t-blink’ rounds, the 28-year-old and the 37-year-old went to war, with a number of unforgettable highlights and a ton of terrific action on display through the 36-minutes. In the end, old “Hands of Stone” prevailed via a somewhat controversial upset split decision, relieving “The Blade” of his green belt.

To this day, however, Barkley – who can be both a touch bitter and unrealistic, such is the fighter’s pride that refuses to leave him – believes he won and was robbed, the victim of boxing politics.

This does not dampen what was a special fight and a magnificent night though, and today Barkley does give Duran the respect the Panamanian deserves.

James Slater: Your classic fight with Duran took place just over a quarter of a century ago this month. Does it seem that long ago to you?

Iran Barkley: “(laughs) Nah, it don’t seem that long at all. In fact, it seems like it was yesterday. I’m still fighting the good fight today and I still think about that fight.”

Q: Have you watched that fight recently, on tape or on T.V?

I.B: “No, I’ve not seen it recently, but whenever I do look at it I just know that that’s the fight that got away from me. That’s the one I really had to win. If I had won, that’s when the really big money would have come in and I’d have had everything I need today. I’ve got my health and my strength and everything, but if I’d won that fight, I’d have had it all. I knew that [Sugar Ray] Leonard and [Marvellous Marvin] Hagler would never fight me anyway, but someone would have had to have fought me and I’d have been paid real good.”

Q: Duran shocked the odds and the experts that night. Did he surprise you at all?

I.B: “No, he never surprised me. I knew he’d be in great shape. I remember working with my best friend, Davey Moore, who was getting ready to fight Duran, and I looked at Duran as he was preparing for that fight and he was fat. But I also remember seeing Duran when he fought Kirkland Laing (three fights prior to the win over Moore) and he was skinny as hell (laughs). So I knew he was the master at losing weight and training for a fight.”

Q: Were you not surprised when Duran took your best punches, like that double left hook to the head in the 7th-round?

I.B: “I was surprised [by that], but I knew he was a fighter. I knew he was durable, like me. I also knew that I had to win the fight by KO or else I wouldn’t win. I knew I wouldn’t get a decision and that’s what happened. When I was waiting in the ring for the decision, I knew they’d give it to him. I knew it, I felt it and I said it. But I put everything I had into that fight. I just knew that Ray Leonard was next door [for Duran’s next fight].”

Q: Did you try and get a rematch with Duran?

I.B: “Yeah, but I knew that was never gonna happen. I asked [Bob] Arum [for a rematch] but he did what he had to do and set up the Ray Leonard fight (the Leonard-Duran rubber-match of December 1989). I knew a rematch wouldn’t happen for me.”

Q: Had you actually gotten one though, what would you have done differently against Duran?

I.B: “Well, I’d have jumped right on him, but I did that the first time I fought him. I had to knock him out to win.”

Q: If you had been given the decision on February 24th, as some people felt you deserved, who do you think you might have fought next – even if you feel Leonard would not have agreed to fight you?

I.B: “I think Hagler or Leonard would have had to have fought me.”

Q: Hagler was retired by then but a fight between you and he could have been a brutal fight, how would you have done?

Q: Well, you shocked Thomas Hearns so who knows! Was Duran the greatest fighter you ever fought?

I.B: “Most definitely. He was stylish, he was crafty and he was tough.”

Q: How hurt were you in the 11th-round when Duran scored that knockdown over you?

I.B: “I wasn’t hurt at all and I wasn’t tired at all. All it was was a good flash knockdown.”

Q: What is your opinion of Duran today?

I.B: “Duran is great. We are like brothers in that regard, we are both great fighters. I like Duran, we are great friends and I have a lot of respect for him.”

Q: But there was bad blood going into the fight all those years ago?

I.B: “It was bad blood, because of the fight he had with my friend Davey Moore. Bad feelings came up because of that fight, but today we are friends.”

Q: Did you feel Duran fought a dirty fight against Davey?

I.B: “Well, I don’t know if he cheated or anything, but he did use his thumb. Like I say, he was crafty. But you have to deal with that [in a fight].”

Q: How would you rate your great fight with Duran? Some people call it the best middleweight title fight of the 1980s.