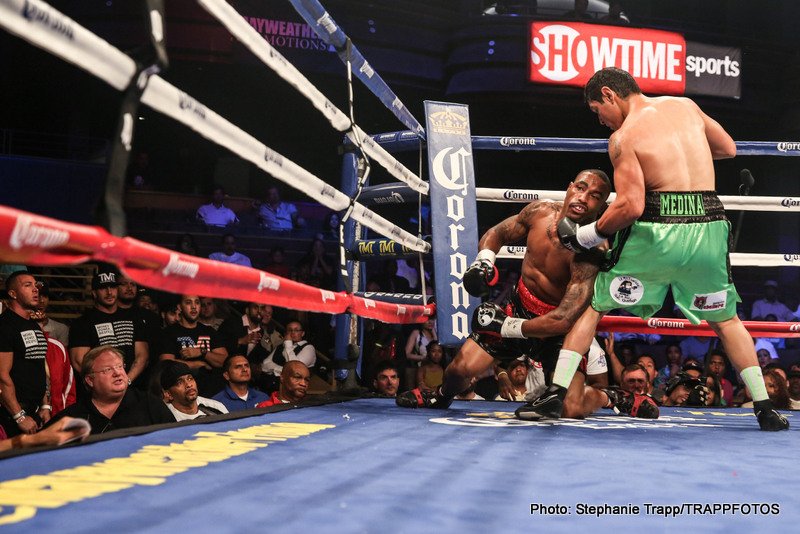 @boxingroundup –  Firstly Ronald let me congratulate you on Saturday night’s victory. Tell me how did it feel to have the first 8 round bout of your career?

Thank you! It felt great, I needed to see how I perform in a lengthy, physical fight with a more experienced opponent.

Fighting Shujaa El Amin was a bit of a step up in the calibre of your opposition considering he has shared the ring with Periban and Stevenson amongst others. Was this a learning fight for you and what experience can you take away from this victory?

Q.1 Ronald, you made short work of Dave Courchaine at the StubHub Center on Saturday night. How happy were you with the performance?

I am very happy of course, I had very good training for it and the result is a great
satisfaction.

Q.2 Were you hoping the fight would last a few more rounds or is getting the early
KO something you are always happy to take?

Super middleweight prospect Ronald Gavril (5-0) takes on Dave Courchaine in the StubHub Center, Carson, California tonight. ‘The Thrill’ has made a perfect start to his promising career and will be looking to add another victory to his resume in a few hours time.

The Romanian native has turned his career around since relocating to Las Vegas and with the experience of trainer Eddie Mustafa Muhammad in his corner Ronald has made a smooth transition into professional prize-fighting.

If America is the land of opportunity, Ronald Gavril has seized his big chance with both hands. Born in Bacau Romania ‘The Thrill’ is now an exciting young prospect fighting out of Las Vegas. Ronald is the epitome of hard work, determination and hope. Since turning professional in 2011 the 27 year old talent has swept aside his first five opponents with his action packed aggressive style.

However the future of the promising super middleweight was once in doubt until his management made the brave decision to relocate to Las Vegas. Ronald’s profile immediately inflated as he put his impressive fighting ability on display in the gyms of Sin City.