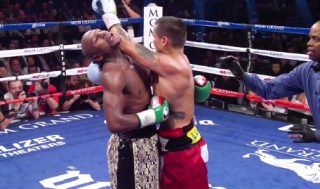 Atlas thinks Mayweather played it safe too much by holding, running and throwing pot shots instead of standing and trading with the hard hitting Maidana. Atlas thinks that if a prime Sugar Ray Leonard was in the ring with Maidana last Saturday night, he would have knocked him out with his combinations and power punching.

On Saturday night Floyd Mayweather did what he was supposed to do earlier this May – dominate Marcos Maidana. The rematch billed “Mayhem” turned out to be anything but, as boxing’s pound for pound king pitched a near shutout in front of 16,144 fans at the MGM Grand Las Vegas.

Mayweather, clearly more focused this time around, kept the match in the center of the ring and moved or held to avoid taking punishment from his slower, plodding opponent. Other than a flush right hand Maidana landed at the very end of the third round and a bizarre hand biting incident in the eighth, this was pretty much a glorified sparring session. Punch stats tell the story, as the Argentinian slugger threw more, but landed at less than half the rate than Floyd did. Marcos landed just 17% of his jabs (41-237) and 26% of his power punches (87-335), while “Money” landed 43% of his jabs (64-149) and an astonishing 58% of his power shots (102-177). It was target practice, and Floyd’s holding and mauling tactics quelled “Chino’s” attack. Compare that to the first bout, where Maidana threw almost as many power punches (540) as he did total punches (572) in the rematch. 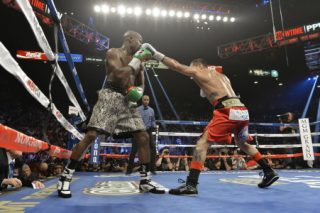 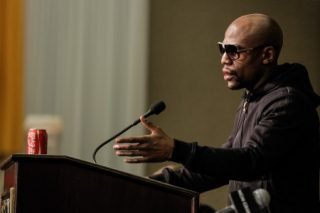 (Photo credit: Stephanie Trapp/Mayweather Promotions) WBA welterweight champion Floyd Mayweather Jr (47-0, 26 KOs) said before last night that Marcos Maidana (35-5, 31 KOs) would be his 47th victim and that’s exactly what happened with Mayweather using superb footwork to box his way to a 12 round unanimous decision at the MGM Grand in Las Vegas, Nevada.

There may not have been as much toe-to-toe action as there was in their first fight in May of this year, but the fight was still quite exciting to watch from start to finish.

After the bout was over, Mayweather was asked repeatedly by media members whether he’ll be fighting Manny Pacquiao or Amir Khan next, but Mayweather didn’t have a clear answer at the time. He says he still needs to think about what direction he wants to go in for his fight in May of 2015. 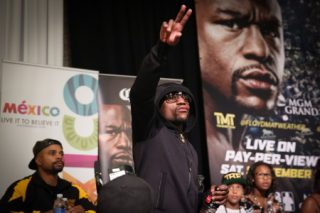 Maidana says he outworked Mayweather by throwing many more punches than him, and he forced the fight with his aggression. The only thing that Maidana feels Mayweather did well was run from him for 12 rounds. Maidana gives Mayweather full credit for his running, but that’s it. Maidana also denies biting Mayweather on the hand in the 8th round. He says that didn’t happen. 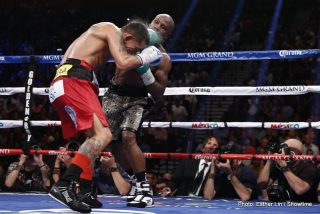 After 24 rounds of boxing with Marcos Maidana, Floyd Mayweather is still the undisputed pound-for-pound champion.

Mayweather (47-0, 26 KOs) successfully defended his WBC and WBA Welterweight and WBC Super Welterweight World Championships with a unanimous 12-round decision victory in a rematch with Argentine slugger Maidana (35-5, 31 KOs) on Saturday in front of 16,144 fans at the MGM Grand Garden Arena, live on SHOWTIME PPV®.

“Money” strategically fought the fight that he wanted, effectively avoiding the looping punches against the ropes that “El Chino” was able to land in their first bout and pivoting back to his domain – the center of the ring. 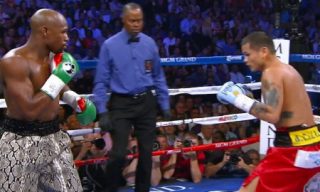 Marcos Maidana (35-5, 31 KOs) resorted to biting tonight but it still didn’t help him against WBA/WBC welterweight champion Floyd Mayweather Jr (47-0, 26 KOs) who easily registered his 47th consecutive win on Saturday night at the MGM Grand in Las Vegas, Nevada. Maidana took Mayweather’s left hand out of commission in the 8th round after allegedly biting Mayweather hard on his fingers of of his left hand while he had him in a headlock.

The referee Kenny Bayless didn’t see the bite by Maidana so he couldn’t do anything about it. Never the less, Mayweather was unable to use his left hand again with regularity until a couple rounds later. What was interesting is that Maidana denied biting Mayweather after the fight even though a replay showed Maidana appearing to bite Mayweather.

Four months ago, Floyd ‘Money’ Mayweather encountered what most viewed as the toughest night of his 18 year career at the hands of Argentinean slugger Marcos ‘Chino’ Maidana. From the moment the final bell rang, fans all around the world have been split on what we witnessed. Mayweather critics felt he would avoid a risky rematch at all cost; supporters felt there was no need for one. Yet here we stand at the doorstep of a sequel, and tonight, once and for all, questions raised will be questions answered. As we prepare for this epic showdown, we take a look at keys to victory, four critical game changers to explore, and an official prediction:

Tonight, Mayweather will need to start fast and dictate the tone early. Part of that process will need to be dedication to aggressive body work. In their first fight, once he went to the body, we saw an immediate change in the overall aggression of Maidana as Mayweather slowed him down rather quickly. Aside from body work, Mayweather needs to keep all exchanges in the middle of the ring. Maidana missed 637 punches in the first fight, and of the 221 he landed, more than 70% came against the ropes. If Mayweather can stay off the ropes, be first, and commit to the body, a little footwork would cement his chances of victory, barring an unexpected powershot that he fails to overcome.