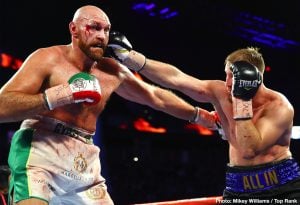 If a dedicated boxing fan missed last Saturday’s Lineal Heavyweight Title Contest between defending champ Tyson Fury and unheralded Otto Wallin because he was working overtime to pay for his three boxing streaming subscriptions, and only saw the score cards the next day, he would conclude that Tyson Fury got on his bicycle and did his best Floyd Mayweather impression for 12 rounds much like he’s done in the past.… read full article “Tyson Fury’s Cuts a Black Eye for the NSAC”

Mogens Palle, who celebrated his 60 year anniversary as a boxing promoter earlier this year, is back with an action-packed program in Copenhagen, Denmark on September the 15th.

Together with popular Danish former heavyweight fighter Brian Nielsen the 84-year old promoter, who was inducted into the International Boxing Hall of Fame (IBHOF) in 2008, now runs the Danish Fight Night boxing shows, which the pair started in December 2015 with mainly all new talents billed as “Tomorrow’s Champions”.… read full article “Promising Danish fighters gets the spotlight on ambitious Mogens Palle show on September 15”