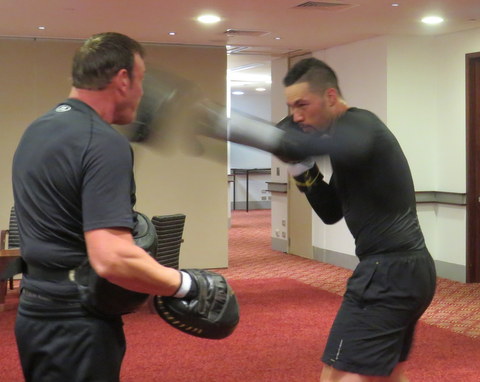 This strange life, such is the itinerant and transient schedule of the professional fighter which constitutes Joseph Parker’s life nowadays: He lives and trains in Las Vegas with Coach Kevin Barry, has fought in three different countries over the course of 2014 and now we find him on a Saturday afternoon in a deserted ballroom at Auckland’s Pullman hotel, just he and Barry hitting the mitts and making small talk along way.

Kevin and Joseph have been generous enough to invite us into camp on a couple of occasions now and each time I’ve been struck by how light and humorous the tone is. As an example Kevin mentions Kiwi golfing phenom Lydia Ko who recently collected a $1.5 million dollar payday on the women’s LPGA and Joseph’s eyes light up as he quips to Kevin that ‘maybe it isn’t too late for us to turn to golf!’

Young up and coming heavyweight Joseph Parker has been rewarded for his busy schedule in 2014 by being moved into the WBA’s top 10 ranked heavyweights.

Beato Costa Junior has ended 13 of his 15 victories by KO and this fight presents an element of risk for Parker, especially when considering the limited time available that Parker and Coach Kevin Barry have had to study tape on their opponent.

Trusts Arena, Auckland. On the undercard returning Polish Heavyweight Izu Ugonoh scored a 2nd round TKO against Junior Iakopo to take his record to 10-0 (8KO’s).

In front of a raucous home crowd at Trusts Arena, Joseph Parker pounded out a unanimous decision against a very durable and game Sherman Williams.

Parker came out in the first round establishing the distance with what is becoming his trademark jab, doubling it up as well as shooting it to the body, leaving Williams looking unsure of how he could find a way inside. 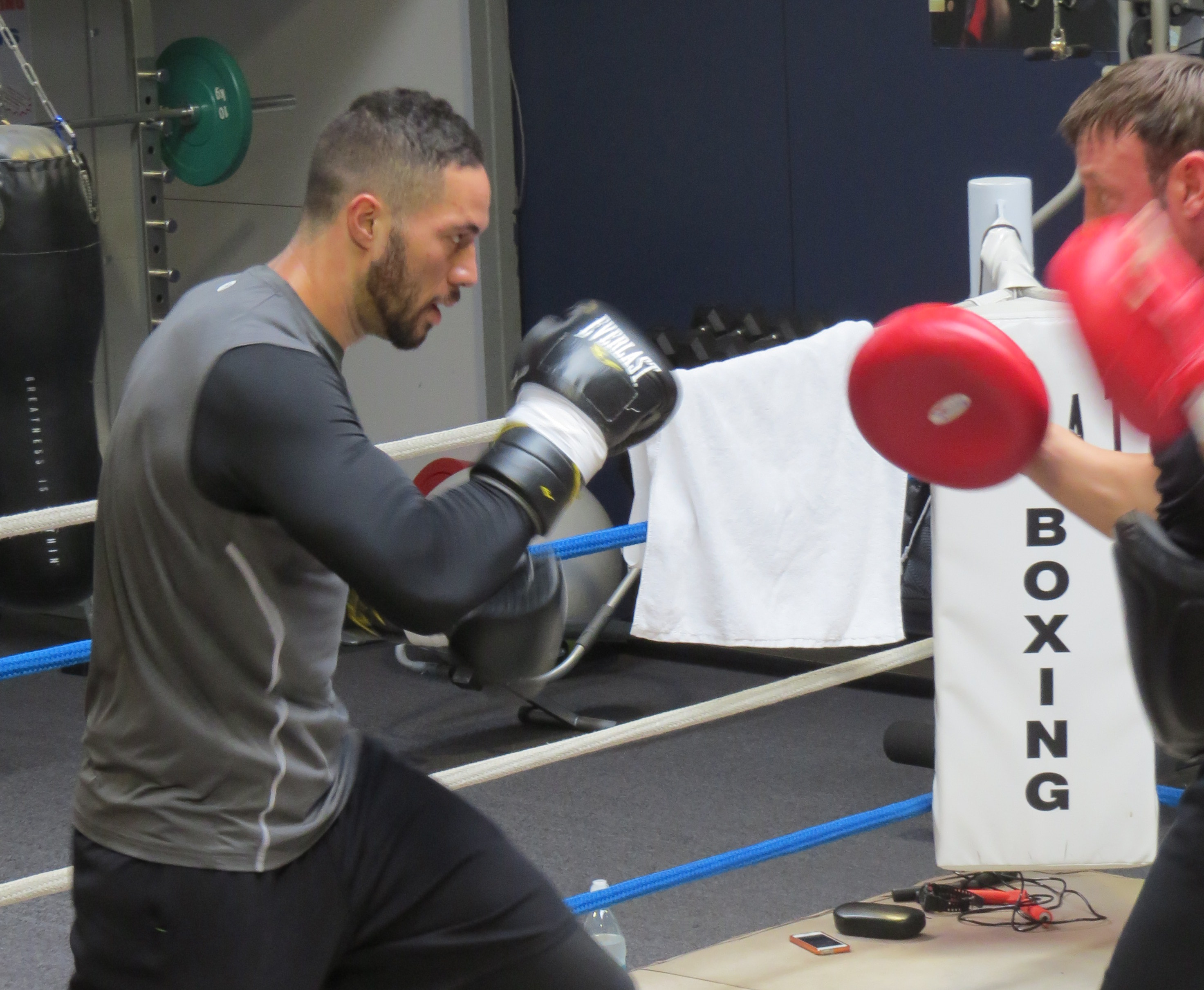 Eastside Boxing gets an invite into Joseph Parker’s training camp as he prepares for his October 16th fight with Sherman ‘The Tank’ Williams.

Driving through this low key industrial estate in East Auckland there are no neon signs or flashing lights that scream out boxing gym and that is just how Coach Kevin Barry prefers it. Like a mirage in the desert, housed out the back of contracting company is a small purpose-built boxing gym built by the company’s owner and personal friend of Barry.

It is a place free of distractions and allows Team Parker to get down to the business of work uninterrupted. However if anyone were to walk through the doors the exertion being put in is obvious. You can see it as the young fighters are put through their paces watched intently by their trainer. You can hear it with every thud of the heavy bag or crack of the mitts and you can definitely sense it as the air vibrates around them. 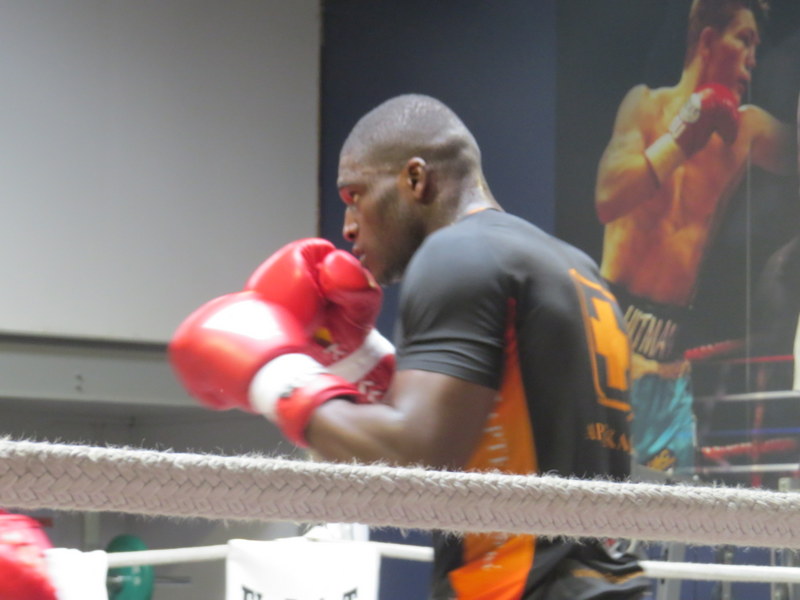 A Polish guy with Nigerian parents walks into a gym in New Zealand….it sounds like the beginnings of a good joke but it is merely proof once again how the sport of boxing can uplift a fighter from everything they know and transport them halfway around the world as they seek to take their tools of trade on the road, mapping out a journey to championship belts and a better life.

I meet Polish Heavyweight fighter Izu (pronounced ‘E-zoo’) Ugonoh at a boxing gym in East Auckland as he prepares to take on the ever dangerous ‘TBA’ as one of the featured undercard bouts for the upcoming Joseph Parker/Sherman Williams fight at Trusts Stadium on October 16th.

At just 22 Kiwi Joseph Parker is one of the most exciting heavyweight prospects to come along in some time. Now living and training out of Las Vegas with Kevin Barry, Parker is set to face the very durable Sherman ‘The Tank’ Williams at the Trusts Arena in Auckland New Zealand on October the 16th in what will only be his 11th pro fight. We caught up with Joseph to get his thoughts amongst other things on the fight, how he first got into the sport and the fighters he grew up most admiring.

ESB: Hi Joseph, thanks for making time for us today. What was it that first made you lace up the gloves? Was it your dad that got you in to the sport? How old were you when you started fighting in the amateur ranks and did you have immediate success?

JP: Yeah my dad had an interest in boxing so I came up quite young, probably around the age of about 4 or 5. Then I had my first fight when I was 12 years old. It went well, I got the win and I sort of carried on from there. I did a lot of travelling and represented New Zealand from about 16 onwards. 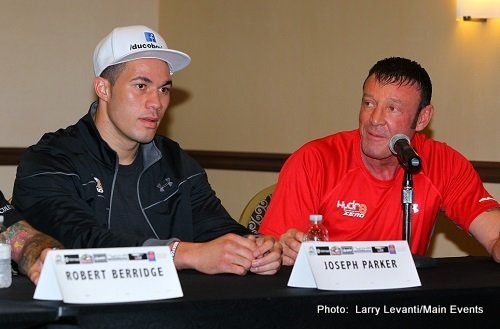 Kevin Barry, a name most familiar to boxing fans as the former long time manager and trainer of David Tua, took time out of his busy schedule to have a chat with us about another exciting heavyweight to come out of New Zealand in Joseph Parker.

Parker will be facing the very durable (and former Wladimir Klitschko sparring partner) Sherman ‘The Tank’ Williams at the Trusts Arena in Auckland New Zealand on October the 16th in what will only be his 11th pro fight.

Check out what Kevin’s thoughts are on the potential of Parker, possible future opponents for him and the trainer that most influenced him during his coaching career. 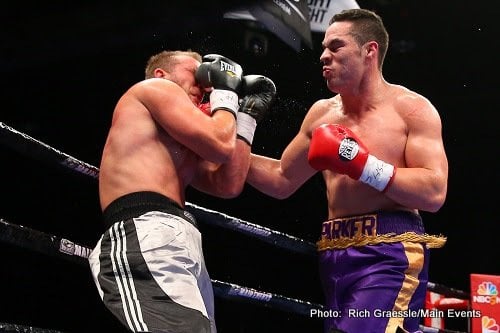 New Zealand, made up of two small islands, the shaky isles as it is sometimes referred to, isolated and diminutive in population, can be both a forward thinking yet deeply conservative country. Paradoxically everyone loves a winner in New Zealand so long as the winner in question remains both humble and unassuming.

When placing its winning bid to host the 2011 Rugby World Cup, a foundation of the countries’ successful tender was a pledge that the tournament would be played in ‘a stadium of 4 million’ and so it proved to be. The comparatively small size of New Zealand, where almost everyone knows someone, means that when their sports stars excel they often do so carrying the weight of a nation on their shoulders.