Are Amir Khan And Freddie Roach About To Split? Khan Says “I Want Someone Who Is With Me All The Way Through” 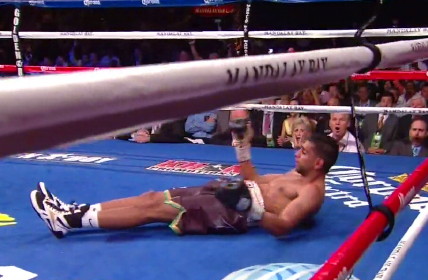 By James Slater – Amir Khan has switched trainers before, more than once actually, and he may be about to do so again. In what would be a massive turn of events in his pro career if it actually happened, Khan has hinted he may part ways with ace trainer Freddie Roach: the man who rebuilt him after his shocking KO loss to Breidis Prescott.

Khan, still licking his wounds after that sizzler of an upset loss to new star Danny Garcia (who everyone, from Ajose Olusegun to Zab Judah, wants to fight next), spoke with The Daily Mirror and what he said sure sounded like he has plans for a major change.

“I want someone who is with me all the way through, like my conditioner Ruben Tabares is,” Khan said. “It’s hard when you’re with Manny [Pacquiao] and have to be the number two. Every fight is a big fight for me, I’m fighting top-10 guys and so I need the best guys with me all the way through. Now is the best time to sort these things out and my team will talk things over with Freddie.

“There are a few things I have to change to benefit me. Maybe we have to see if I’m doing the right training and have the right sparring.”

Khan has also spoken of the fatigue that can be picked up when he travels from the U.K to L.A, to The Philippines, and the 25-year-old is quite clear when he says it’s “hard being number two.” Does Amir feel Freddie, as great a trainer as he is, gives too much time to Pacquiao? Maybe. Khan has no ill feelings towards Roach, but maybe he is in need of a change, and a base camp set at home in the U.K?

Aside from the controversial points loss to admitted drugs cheat Lamont Peterson, Khan has lost just one fight under the guidance of Roach, but there have been whispers of cracks forming between Khan and The team at Wild Card for some time now. Still, who would Khan sign on as his new trainer if he did leave Freddie? There are a number of gifted and talented trainers in the U.K, and maybe Khan is already eyeing one of them up.

Of course, after the talk Khan has planned between he and Roach, all differences could be patched up. Despite the crushing loss he suffered this past Saturday night, Khan remains a special talent. Whether it’s with Roach or another trainer, I think we will see “King” Khan wearing another championship belt before too long.

Previous post: Glen Johnson, Future Hall of Famer: Not One of the G.O.A.T.s but Perhaps the Best

Boxing News → Are Amir Khan And Freddie Roach About To Split? Khan Says “I Want Someone Who Is With Me All The Way Through”