Exclusive Interview: Paulie “The Magic Man” Malignaggi Talks About The Hazards And Potential Injuries In Boxing 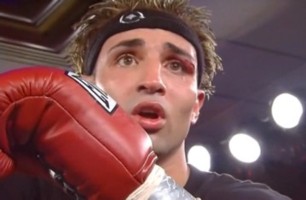 By James Slater – New York’s Paulie Malignaggi knows all about the injuries side of boxing. A documented five times “The Magic Man” has broken his right hand, and surgery and frustratingly long inactive periods have been endured as a result.

Few if any fighters are fortunate enough to go through a career without a number of injuries, and Malignaggi’s brittle hands have been his personal bugbear.

Here Paulie discusses the injury side of the sport he has become IBF world champion in:

“For me, it’s been hand injuries,” Malignaggi said when discussing the biggest injury problem he’s had in his pro career. “It’s always been a letdown when the hand has broken and I’ve needed surgery. This is a combat sport, so you’re striking your opponent, and if you don’t have especially strong bones in your hands, as is the case with me, you can have problems. I’d say in general, training camp is the more difficult time for a boxer. The typical boxer gets more hurt in the gym than he does in an actual fight. Obviously and unfortunately, retinal injuries can be common in boxing. You can get eye damage in sparring, where you do way more rounds there than you do in the ring. Obviously broken bones, like the nose and the cheekbone, are common too..”

“In any given year, for me myself, I can be out for six months with a broken hand. Other injuries not so long, unless a fighter gets retinal damage – that can end a fighter’s career; it’s real serious. The thing with a broken hand is, I need time out to have surgery, heal and then, when the cast is off, I need two months to get back into top shape for a fight. I can only speak for myself, but fighters can spend a fair amount of time out due to injury.”

“I’ve been forced to try and ignore my hand troubles a number of times in the past. I have brittle bones in my hands and that’s just that. I have trained with a damaged hand and not known it was basically broken until later, at the doctors. I don’t think I’ve ever made the injuries I’ve suffered any worse due to trying to ignore the pain. I’m used to it. But, yeah, I have tried to ignore hand injuries in the past. I’ve also fought on with a broken hand a few times [in an actual fight]. Has that weakened my hand? I don’t think so. My hands have always been brittle. One time, my right hand was so bad ahead of a fight, I couldn’t even turn the ignition in the car. But I just jabbed the guy to death with my left hand. The hand has been hurt or broken so many times now, I’ve lost track. People ask why I have so few KO’s. The reason is the hand problems. Early on, I got quite a few stoppage wins.”

“I’d say retinal injury is the biggest, most fearful injury for a boxer. A fighter can go for an eye test thinking everything’s fine, and then find out he has a problem that can put his career, his livelihood, in jeopardy. As for avoiding injuries in training: for my bones, I take calcium. I also have a strength and conditioning coach. Also, to avoid strains and pulls, you have to make sure you warm up and cool down before and after each and every workout. Also, for more serious things, make sure you take regular checks. Basically, take all the precautions you can when in training.”

Previous post: Dawson to Hopkins: I Know You’ll Keep Your Word; Arreola vs. Releford, Harris vs. Thompson on Friday