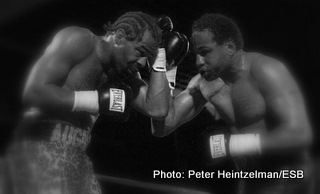 By Peter Heintzelman & Trish Kilcullen – “Last Man Standing” was the titled card for this Saturday night’s fights at Foxwoods Resort & Casino, in Mashantucket, Connecticut. Scheduled to fight was Joey “KO Kid” Spina and “Sucra” Ray Oliveira, as the headliner for the famed Foxwood Theatre, but it all fell through this afternoon. Ray Oliveira, 47-11-2, 22 KO’s, of New Bedford, MA is very upset.

EastSideBoxing caught up with Sucra moments ago, and inquired as to just what happened that caused the boxing commission to cancel his comeback fight at the casino:

ESB: So Ray, what happened with the physical exam that caused the Mashantucket boxing commission to can your fight this Saturday night against Joey Spina?

Ray Oliveira: I have no idea. My doctor, Doctor Moore of Dartmouth, MA, had told me “yes, I could fight,” and their neurologist said “No, it’s too risky!.”

When the commission informed me I wasn’t going to be allowed to fight, I told them: “I understand what your doctor said, but I went to my doctor, a neurologist, and he said, “yes,” I could fight!

ESB: Do you feel it was safe for you to fight?

Ray Oliveira: “ If I had a question mark, I wouldn’t be fighting, but everything was “heads up” and just right!”

ESB: What’s next for Ray Oliveira?

Ray Oliveira: “ This is not stopping me. I want to fight! Is it risky to fight? Sure, its risky for all fighters. But I’m in better shape now than ever before. The Commission sent me to a Dr Arezo (spelling?), in Cocord, Massachusetts, and he said “you are in great shape, but its too risky.” Well, that’s not saying I can’t fight! Well, yeah, its risky for any boxer to fight. And of course it may be riskier for older fighters to fight. That’s not saying I can’t fight!”

ESB: What do you want to say to your fans, Ray?

Ray Oliveira: “ I’m sorry I let them down, but I’m not going to let them down – – I’ll get my three fights I have been hoping for, but just not at Foxwoods – – I want my last three fights!”

“The bastards pulled the plug on Ray,” said a former cutman and cornerman for Oliveira. “Two days before the fight – – what a disaster for everyone that they waited so long. Why wait for two days before the show?” But, I would rather see the kid live, than to make the money. But, I don’t think it was the money Ray was looking for . . . . it was the limelight, and to be back in front of his fans. Amen.

The fights will apparently go on, as CES matchmaker, Ted Panagiotis, is forced to pull a rabbit out of his hat, to fill the main card at Foxwoods on Saturday.