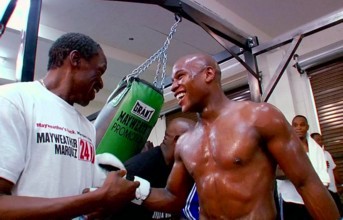 by Geoffrey Ciani – This week’s edition of On the Ropes Boxing Radio featured an exclusive interview with boxing trainer Floyd Mayweather Senior whose son (currently being trained by Roger Mayweather) is preparing for a May 1 bout with Sugar Shane Mosley. Here are some excerpts from that interview:

Regarding his son’s preparations for his May 1 fight with Shane Mosley:
“My son’s in a good mental mind state. He’s physically fit, he’s sharp, he’s slick, he’s clever, and he’s smooth. That’s what I would say about the whole picture.”

On whether he still believes Mosley represents the toughest challenge for his son (based on a claim he made in Episode 30 of On the Ropes Boxing Radio:
“I think Sugar Shane would be more of a challenge, I should say, then the other guys. I just think that Sugar Shane would be the ideal fight for my son to fight. We’ve been talking about rough and tough and all this stuff, but at the end of the day I look for my son to be prepared with Shane because Shane don’t have no defense for one thing. That’s one thing that’s going to take the cloth off of Shane. He don’t have no defense, and if you don’t have defense and I don’t care how good you fight, if you don’t have defense you get hit and you get beat up. So my thing with Shane is that I think he’s going to get beat up. That’s what I think is going to happen. Floyd’s faster and he’s smarter, by far. He’s gifted. Shane is definitely stronger, he’s going to come to fight but coming to fight with no defense—you get beat up!.”

His response to members of Team Mosley who claim Shane will knock Floyd out:
“Well, I would say this right here, even though they gave Sugar Shane the last fight when he fought (Oscar) De La Hoya, De La Hoya gave him a thorough whopping. You know I was training De La Hoya at the time. De La Hoya gave him a thorough whopping. I mean the world already knows that, he took a terrible beating right there, and if you didn’t see the fight you do the replay and you will see and then you be the judge for yourself. I’m just telling you about that, but we’re not worried about that. Floyd is smarter than De La Hoya and he’s faster than De La Hoya.”

On Floyd’s last fight with Juan Manuel Marquez:
“If you remember seeing the last fight with Marquez, Floyd used his jab a lot. That’s something he hadn’t done in quite awhile. He’s got his jab working now and when he’s got his jab working everything comes off the jab. The jab’s just like the key. I know Nazim is talking a whole bunch of crazy mess, and all that crazy shit, but that ain’t nothing but stupid ass talk. I’m telling you for real, Shane’s going to get his ass spanked.”

On whether he believes Mosley presents a tougher challenge for Floyd than Manny Pacquiao:
“I don’t even want to talk about no Pacquiao. That’s the last thing on my mind in boxing—period. You already know about him, forget about him. Definitely, the man we are fighting on the 1st will be a much tougher fight if everything is right.”

On whether he believes Mosley is too old to face Floyd given his age and his long layoff:
“Shane Mosley is thirty-eight and he’s coming to fight Floyd too late. You know, he’s coming to fight Floyd too late. If he had a chance, maybe he should have done it a few years ago. Floyd challenged Shane Mosley when Shane Mosley was at his best pound for pound fighter at that time at 135 pounds. Floyd challenged him when little Floyd had just won the championship at 130, the junior lightweight champion. Shane was the lightweight champion but Floyd was the junior lightweight champion and we challenged Shane, and they denied us and they did not take the challenge. They did not take the challenge. Now, he’s fighting because it’s a must—have to fight, got to fight, need to fight. That’s why he’s fighting us now. He has to, he must.”

His official prediction on his son’s fight against Sugar Shane Mosley:
“What’s my prediction? Let me put it to you like this. You know they’re doing this thing on HBO so I’m going to tell you like this: I want everyone to know, right here on HBO, this fight will not go past eleven, and you heard this first from Floyd Mayweather Senior on 24/7. Sugar Shane is going to get busted up.”

Be sure to tune in to the Mayweather-Mosley post-fight edition of On the Ropes Boxing Radio which starts Sunday May 2 at 1:30am Eastern Standard Time.

To read more by Ciani or Jenna please visit The Mushroom Mag:
http//www.eatthemushroom.com/mag