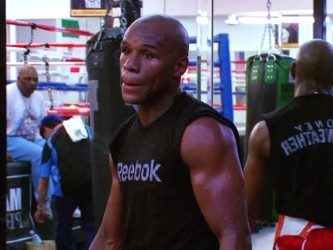 FLOYD “MONEY” MAYWEATHER – “It’s been a tremendous camp. Roger [Mayweather] has done a tremendous job getting me ready for a fight of this magnitude. I know what it takes, hard work and dedication, prayers and belief in a good team.

“I believe in loyalty. I am loyal to my team. I have been with the same team from beginning to the end.

“Be smart, be sharp and fight hard. May the best man win. I am pretty sure that Shane feels deep in his heart and deep in his soul he is going to win.

“It doesn’t stop May 1. Mayweather Promtions is the past, present, future of sports and entertainment, period.

“HBO, we will be family forever.

“I just happen to be an athlete that’s God gifted. There are some athletes that are just different, like Kobe, Lebron, Kevin Garnett and then there are athletes who are just talented.

“I’m pretty sure Shane is in good shape. I don’t think he is in better shape than me.

“What’s so crazy is that when I started fighting at welterweight, I made the world pay attention to the small man.

“I brought USADA in to keep the sport on an even playing field. Everyone knows this is done for the betterment of the sport.

“After I get blood taken, I’ll go in and box 12 or 13 rounds, no problem whatsoever.

“My trainers have been with me for 40 fights. I didn’t wait for the biggest fight of my career to get a new trainer.

“I’m the biggest thing, because numbers don’t lie. The proof is in the pudding, I take less punishment, I land the highest percentage and I work the hardest.

“As far as drawing power and superstardom, me and Shane are not on the same level.

“My father taught me my defense and no one can break through it. I just know if a punch is coming, I can feel it. And I know what my opponent’s going to do.”

“I have to thank God for this match up. It’s been a long time since I’ve been in a big fight like this.

“Like Roger [Mayweather] said, we can have dinner afterwards. We can have a big party. There’s no love lost.

“None of you guys would be here if it weren’t for two great fighters getting it on.

“I have to thank my father for giving me life, for bringing me to the gym when I was such a young guy and staying with me through the hard times. He had to go to work, my mom had to go to work. I am very thankful to be in this position and have a great fight.

“I hope Mayweather is ready for this. This will be one of the great fights of this decade or maybe even history. It’s going to be a great fight.

“I’m very thankful to be in this position and have this opportunity. I’ve put everything I have into this fight. It’s going to be one, if not the biggest fight of the decade, even of all history.

“This has been a great camp. We’ve had a brotherhood.

“I don’t think his comments have any bearing on me. I’m a competitor so I want to go out there and do what I do.

“I’m gonna win this fight by being Shane Mosley.

“Oscar was successful with the jab. His arms are almost as long as mine. So I think the jab will be important.

“The plan is to be Sugar Shane Mosley. To be the best in the ring.

“I think there’s a resurgence in boxing. We’re putting boxing back on the map.

“You can expect a lot of speed and a lot of aggression.

“The key is going to be speed and power. I’m in the best shape of my life and I’m not worried about ring rust.

“I always predict a knock out. We are going to make a magnificent fight.

“Margarito threw one thousand punches in his fight before me. People said I was too old to keep up with him.

“I think when you’re going through stuff in your life, there are a lot of reasons you bring people into your camp and they start to change things.

“I’m in a better place now. I’ve wanted a big fight for a long time.

“There are different ways to break through his defense. In this equation, I have the long arms and the speed too.

“This is a great fight. When we fight again, that would also be great. I have an obligation to Mayweather for fighting me. He chose to fight me first.

“I am happy we have three more days to figure out who is the best.”

“Here we go again, another mega-fight. This has been a great promotion. It is by far the most heavily promoted fight we have had thus far. The fans are going to be the beneficiary of this. We know Mosley will be prepared as Floyd will be prepared and we are expecting a great fight

“It is really a pleasure to be back here at the MGM Grand. It feels like the home away from home. There are iconic venues, Dayton for racing, Yankees stadium for baseball and for boxing, it happens right here at this property the MGM Grand Garden Arena. It is the iconic venue for our sport which is boxing.

“The world is talking. The world is asking ‘Who R U Picking?’ I have never seen the kind of activation that we have seen in the last couple of weeks.”

“I just got and update this morning. We have almost 100 million online impressions, activations on entertainment platforms, urban sites it really is an unprecedented kind of response

“There have been 750,000 votes online. It is shaping up to be as we expected a dead even race. A dead even fight. Fifty-one to 49 percent

“It really is the dead even fight that we anticipated. That is what these two great athletes are all about fight after fight, fighting the best and that is what you can see this coming weekend.

“We are already at an eight-figure gate. It is great to have these two athletes here again. It is a thrill for us all and we appreciate you both.

“We have already sold almost 3,000 closed circuit seats and it shows the interest in this fight.

“About six, seven, eight months ago I told you, before the Mayweather-Marquez fight that we would break records. I said we would do 1 million buys and you all laughed at me, but we broke 1 million.

“The man who’s put boxing back onto the map, Floyd, thank you for all of your hard work and dedication.”

“Here we go again. Another mega-fight. This has truly been a great promotion. It’s been by far one of the best promotions we’ve had by far.

“We have every anticipation, that with all the hard work each fighter has put into this fight. None of this would be possible without the man who demands the best from all of us.”

“You asked how boxing goes. It goes on in the gym or outside of the gym. We are here for one of the biggest events in the history of boxing. We have two great athletes my nephew and Shane Mosley. I’ve known him a long time and obviously I have known my nephew since he was born.

“If it wasn’t a great fight, all of these people wouldn’t be here eating for free. This is going to be one of the biggest events in the history of boxing. When it is all said and done, the better man is going to win.

“(To Floyd) I think like your daddy thinks. You’re the greatest thing in life.

“(To Mosley) I am not your enemy. I am your friend. It’s all good man.

“(To the Mosleys) When it’s all done, you can invite me over to dinner.”

“My son is going to show up and give a good fight.

“Guess what, he’s here now. (To Shane) You are in trouble. You’re scared now, as I’m talking to you. You’re scared because I’m the one who brought him into this world.

“Come May the first, Shane is going to get a chance to see everything he wants to see, but them hands.

“I see a real good fight come Saturday. My son is definitely prepared. He is one hundred percent ready. I know he’s smarter, he’s slicker, he’s better. He doesn’t have any weaknesses.”

“This is going to be an outstanding performance. As I have said before, you have good fighters, you have champions, you have elite fighters and you have guys that are special. In this fight you have a rare occasion where you see two special guys going against each other.

“I said before, when the cameras come on I would never turn into a buffoon.

“I would rather see my fighter behave like Shane Mosley than to see him fight like some of the fighters out there. I would rather see him have that conduct and that character. We represent more than just ourselves.”

“Like my best friend Shane Mosley, I am not one to run my mouth.

Mayweather vs. Mosley: Who R U Picking? is promoted by Mayweather Promotions and Golden Boy Promotions, and sponsored by Cerveza Tecate, AT&T, DeWALT Tools and StubHub. The 12-round welterweight battle is set for Saturday, May 1 at MGM Grand in Las Vegas and will be produced and distributed live on HBO Pay-Per-View® beginning at 9 p.m. ET/6 p.m. PT.

Seven of the MGM MIRAGE properties will host closed circuit viewing of Mayweather vs. Mosley. Tickets for the closed circuit telecasts at all venues are priced at $50, not including applicable service charges and handling fees are on sale now. All seats will be general admission and will be available at each individual property’s box office outlets and at all Las Vegas Ticketmaster locations (select Smith’s Food and Drug Centers and Ritmo Latino). To charge by phone with a major credit card, call Ticketmaster at (800) 745-3000, or visit www.mgmgrand.com or www.ticketmaster.com. Ticket sales are limited to 20 per person.

The finale of HBO®’s all-access reality series “24/7 Mayweather/Mosley” debuts Friday, Apr. 30 at 8:30 p.m. ET/PT. Episodes one thru three are available on HBO ON DEMAND®. All four episodes will air consecutively on Saturday, May 1 at 9:30 a.m. ET/PT on the main service.

The Mayweather vs. Mosley pay-per-view telecast, beginning at 9 p.m. ET/6 p.m. PT, has a suggested retail price of $54.95, will be produced and distributed by HBO Pay-Per-View® and will be available to more than 71 million pay-per-view homes. The telecast will be available in HD-TV for those viewers who can receive HD. HBO Pay-Per-View®, a division of Home Box Office, Inc., is the leading supplier of event programming to the pay-per-view industry. For Mayweather vs. Mosley fight week updates, log on to www.hbo.com.

Next post: Peter Quillin to train with Freddie Roach

Previous post: Martirosyan-Greene is Co-Main at Yankee Stadium on June 5