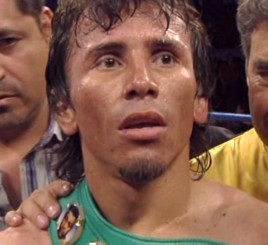 by James Slater – We’re all still trying to take in the stunning news of how former two-weight champion Edwin Valero chose to take his own life whilst in jail earlier today, and for most of us it’s from a boxing standpoint only that we can even relate to Valero and the whole sorry saga. Of course, condolences must go out to the family of Valero himself and to the family of the woman he reportedly admitted killing, but our sport has lost a potentially great fighter. In this article, I ask how great could Valero have been.

Valero always was something of a short fuse, in and out (mainly out) of the ring; and there will likely be those fans who say they are not all that shocked at what has transpired. However, what must be agreed on is the fact that Valero lost his marbles in a alarmingly short period of time. Only a little over two months ago, the Venezuelan southpaw was beating up Antonio DeMarco whilst retaining his WBC lightweight crown. Also looking ahead to big fights against the likes of Manny Pacquiao and maybe Timothy Bradley and/or one of the two Peterson brothers, Valero was fast becoming a real attraction, and not just to hardcore fight fans, but to casual fans also..

Then, shortly after the 28-year-old announced how he was vacating his lightweight belt in order to move up in weight, all hell broke loose. Domestic violence charges led to an enforced stay in rehab, then the domestic violence led to the murder of Valero’s wife, and finally, Valero, presumably wracked with guilt for having stabbed his beloved, took his own life by hanging. To look at and write about Valero purely from a boxing standpoint when all this has happened may seem callous to some, but what else is a boxing fan/writer to do right now? Not knowing any of the people involved in the whole shoddy saga, I can only write about Valero and his boxing achievements.

And now that he’s gone – one of the most ferociously entertaining and destructive forces seen in the lower weight classes for quite some time – we have to evaluate the former WBA super-featherweight and WBC lightweight champion’s career. Also, we have to ask ourselves, how great, could “El Inca” have been? Would he have been great at all?

No-one disputes the punching power of the man who romped to a straight 27 KO’s (an amazing 19 of them coming inside a round!) and nobody denies the electricity Valero generated in the ring. But, it must be said, the 5’6″ terror never faced an opponent who was close to being ranked as a great fighter. And of course now he never will. But what would have happened if Valero had lived to get that dream fight with pound-for-pound king Manny Pacquiao? No doubt, if the hard case had somehow managed to win that one, his place in history would have been secured (in a far more celebratory manner than it now will be).

But was Valero ever going to be good enough to rumble with the likes of Pac-Man, Bradley and the other polished boxers fighting at or around the 140-pound mark? At 5’6″ Valero, it could be argued, had the necessary height and reach to make it as a light-welter, and his withering, one-punch KO power would have always given him a chance against any fighter he met in the ring. On the minus side, though, is Valero’s crudeness and his less than granite chin. Valero, if he had met a skilled boxer like a Tim Bradley, would likely have been made to miss by a mile or two with some, if not most of his punches. And when under return fire, Valero could be sent to the canvas (as Vicente Mosquera proved in August of 2006).

Would Valero have been able to take Pacquiao’s best and keep coming? Of course we’ll never know for sure, but I think if Valero had met Pacquiao we would have seen a wildly entertaining few rounds, before Valero took the inevitable punch too many and got stopped. Who knows, Pacquiao-Valero could have even topped the still celebrated Hagler-Hearns war for greatest short fight!

As things stand with the ring achievements he did make before his premature death – two titles at different weights – Valero certainly must be remembered as a very good, not to mention hugely exciting, world class fighter. Had he lived he may have got that fight he wanted with Pacquiao, and it’s not totally crazy to say the wild man’s style might, just might, have given Manny trouble and even beaten him. One thing we can all agree on is how exciting it would have been if we’d been allowed to find out who would have come out on top between the two fast and heavy-handed southpaws.

Unfortunately, and whether you feel Valero was capable of achieving greatness or not, any future fights involving him will ALL have to be of the Dream Fight variety.