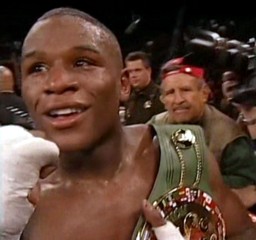 By Errol Hyppolite – Last week ESPN’s Brian Kenny conducted a ten-minute interview with Floyd Mayweather Jr. The tense and entertaining interview focused on Floyd’s return to the ring and his boxing future. After interview Brian posted his thoughts on ESPN radio in which he stated his dissatisfaction of Floyds answers to his questions. This article seeks to answer B.K.’s questions and dispel many of the boxing myths the media uses to criticize Floyd.

Let’s start by analyzing and answering the questions asked by Brian Kenny.

Question 1. Floyd, why are you returning to the ring after you retired?

Answers: 1.Money – Floyd has been out of work for a while and is in need of cash. What better way for him to fix his financial troubles than a return to the ring? The good news is that Floyd will be back for five fights. The financial benefit to the sport will be tremendous.

2.Timing – Boxing media and fans have consistently asked Floyd to return to boxing for over a year. After much anticipation, Floyd has chosen to announce his return at the right time. During the interview B.K. taunted Mayweather by asking if he had generated more PPV dollars than Oscar De La Hoya. The answer is no. However, now that Oscar has retired, Floyd can set his own PPV records. Is there something inherently wrong with that?
3.Legacy in question – Floyd knows many in the boxing community question his claim to be the best boxer of his generation. Critics say Floyd isn’t best because he hasn’t fought the best. His first step in attempting to silence these critics will be a July 18th bout with Juan Manual Marquez.

1.Inactivity – Floyd has been inactive for about two years now. If Floyd decided to fight Pacquiao now he would simply be at a disadvantage during negotiations. Floyd should have a few fights before Pacquiao so he can have the best seat at bargaining table.
2.Promotion – Floyd Mayweather is both a fighter and a promoter. Before every super-fight promoters always do two things: create hype and build up demand. If Floyd defeats Marquez he will certainly accomplish both promotional tasks. Think of the hype and demand Floyd will build for a Mayweather/Pacquiao super-fight if he decisively beats J.M.M., whom many feel Pacquiao lost to twice.

Question 3. Oscar De La Hoya called you out for a rematch, why didn’t you give him one?

Answer:
The boxing community needs to thank Floyd for not granting Oscar a rematch. Their fight certainly generated a lot of money but received a ton of criticism for not being entertaining. While Floyd did initially sign for a rematch, he later backed out of the contract. I can’t thank him enough for sparing my eyes from watching a dull sparring match. Also what better way to elevate your own status than by refusing a fight with the Golden Boy? Smart move Floyd, smart move.

Answer:
In all seriousness, do people really expect Floyd to immediately fight Shane Mosley after almost two years of inactivity? Is it unreasonable for Floyd to take a tune-up fight and see if he’s ready for such a dangerous opponent? People should also remember that Floyd called out Shane in years past but Shane didn’t want to fight Floyd then. After Shane knocked out Antonio Margarito he had the opportunity to call Floyd out live on HBO but he did not. Fortunately, Juan Manuel Marquez was smart enough to do so. In the end fighting Marquez first will generate more demand for a Mosley fight, which will generate a bigger payday for Floyd and Shane’s eventual fight. The only reason Shane is so anxious to fight Mayweather now is because he himself doesn’t have any viable fight options now.

Question 5. Why not fight the winner of the second Pacquiao / Marquez fight?

Answer: Floyd will but first he’ll try and beat Marquez. Why go for one payday when you can all but guarantee two?

Question 6. Pacquiao just beat the two last opponents you also beat. Who do you think was most impressive?

I agree with Brian, that technically the outcomes of Pacman’s victories were more impressive. That being said, it’s also valid to point out that Manny’s last two victories were essentially against Floyd’s leftovers. To Floyd’s credit, he did have to fight Oscar at junior middleweight with 10-ounce gloves. Against Pacquiao, Oscar was clearly impacted by having to make welterweight for the first time in twelve years. Oscar looked very weak and by Freddie Roach’s own admission Oscar didn’t properly hydrate himself for their bout. Pacquiao was also able to dominate that fight because Roach intimately knew all of Oscar’s strengths and weaknesses.

Floyd was the first person to ever defeat Ricky Hatton. Undefeated fighters are harder to beat because they are full of confidence and haven’t had their chins dented. It can be argued that Ricky was a shell of the fighter he was before being knocked out by Floyd. I don’t want to take too much away from Pacquiao’s victory but Hatton simply hasn’t looked good since his loss to Mayweather.

Question 7. Juan Manuel Marquez is an excellent fighter but he’s the lightweight champion. Why fight a guy two weight classes lower than you.

I answered most of this in Question 4 but here’s an additional thought regarding weight classes. In boxing, is it unheard of someone in a lower weight class to move up in weight in order to secure a fight with a big named opponent? Certainly not, but why is it that Floyd seems to take an unusual amount of criticism for fighting opponents who move up in weight to fight him?

Bernard Hopkins is a first ballot hall of famer and one of the greatest middleweight champions of all time. B-Hops three greatest victories were all against naturally smaller men. Oscar De La Hoya and Felix Trinidad both moved up from welterweight to fight B-Hop. More recently, Kelly Pavlik a natural middleweight fought him a t170 pounds. If Brian Kenny asks Floyd why he goes around picking on smaller champions he should ask the same questions to B-hop and many other fighters. If you’ve been around boxing long enough you know that factors such as skill, speed, stamina, and activity play a much bigger role in winning than one’s natural weight. Skill, stamina, and activity are all things that Juan Manuel Marquez has an abundance of.

Boxing media and fans generally criticize Floyd’s claim of greatness, his choices of opponents, and his brash ego. Those who are critical of Floyd substantiate their claims with three boxing myths that high-profile fighters like him are unfairly held to.

Myth 1. Floyd should only fight the best because in the past the greats always fought each other.

Sorry to break the news but the “Golden Age” of boxing was in the 1920’s. Boxing is no longer on network television and fighters are not guaranteed big audiences for fights. The greats still fight each other but only when the price and/or opportunity is right. Boxing is an entertainment business and there is nothing inherently wrong with Floyd or other boxers fighting opponents that offer the right reward relative to their risk. Floyd is certainly not the only boxer who does this.

Myth 2. Boxers should look for the biggest/baddest challenges out there, regardless of price.

This myth makes the least sense to me and is simply unfair to ask of any logical person. In all seriousness, boxers are people just like you and I. Do you go around asking your boss for the biggest, most laborious, and difficult projects you can do? Moreover, how long would do such tasks without asking for appropriate level of compensation? Let’s be honest, some days we feel like doing a lot of work and other days we feel like doing as little work as possible. Are boxers not allowed to do the same?

When Floyd fights, he earns $20-$40 Million a fight as a fighter/promoter. I don’t know about you but if I had a business that earned me that kind of money I would be very careful to make decisions that tended to protect or grow that level of revenue. If Microsoft were only took on the biggest, most risky investments they probably wouldn’t be in business much longer.

Myth 3. Floyd, if you are so great why not be humbler? Why do you have to brag?

Bragging has been rampant in boxing ever since John L. Sullivan said, “I can lick any Sonofabitch in the house.” Muhammad Ali was always praised in the eyes of many for his gift of gab, despite the fact he made some very disparaging comments. Why is it that Floyd is criticized so much for being brash and arrogant?

Personally, I value humbleness more than I value boastfulness. However, if I had a job where I got paid more for bragging about how great I was, I might be tempted to adjust my personality while on the clock.

Finally, Floyd’s bragging while shallow in the eyes of many, works for his personality/generation. Floyd comes from a young hip/hop culture where bragging about how much money one makes has been a formula for success. He’s simply bringing his culture in his profession. Fans love fights with a “good guy” and a proverbial “bad guy.” Incidentally, HBO also loves this scenario as it fits in perfectly into their 24/7 episodes.

I hope this article answers B.K.’s questions, offers insights into business side of boxing, and challenges the standards elite fighters are held to.

On a side note, I agree that Floyd should fight better competition than he has in the past. I am sure that his return to the ring will satisfy those of us who want to see him step up in class. If Floyd’s skills in legacy building become as good as his business savvy he will fight the best and hopefully have a few surprises along the way.

Have questions or comments? Please email me.